Waiting at the Yokota Air Base terminal for a flight home to Guam, Sgt. 1st Class Gregorio S.N. Torre displays the ''Liberty Bell'' he bought in a Saigon shop. (Stars and Stripes)

Waiting at the Yokota Air Base terminal for a flight home to Guam, Sgt. 1st Class Gregorio S.N. Torre displays the ''Liberty Bell'' he bought in a Saigon shop. (Stars and Stripes) 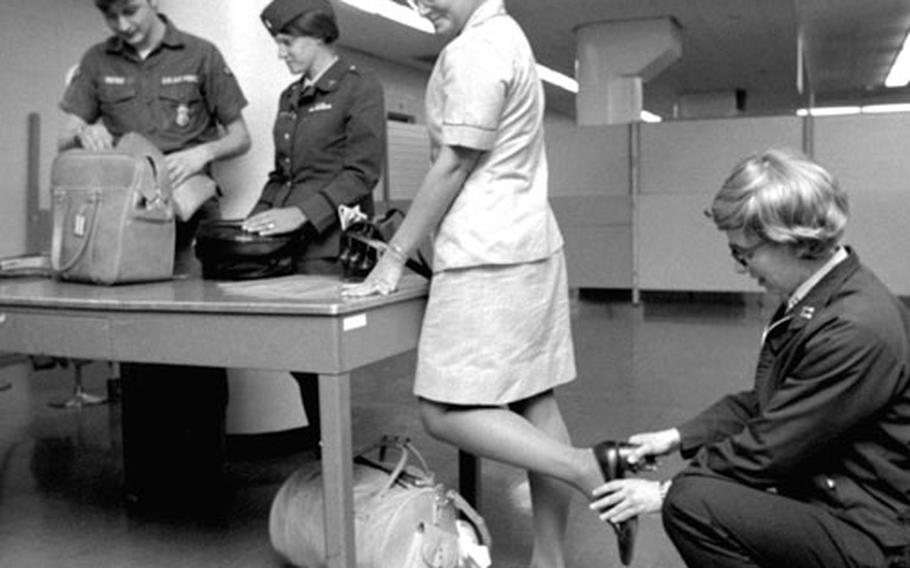 A1C Randall Gale checks the hand-carried baggage of his brother, Dave, who was passing through the Yokota customs area on his way home. (Stars and Stripes) A drug-sniffing dog checks the C141 that brought servicemembers from Vietnam to Yokota. (Stars and Stripes) 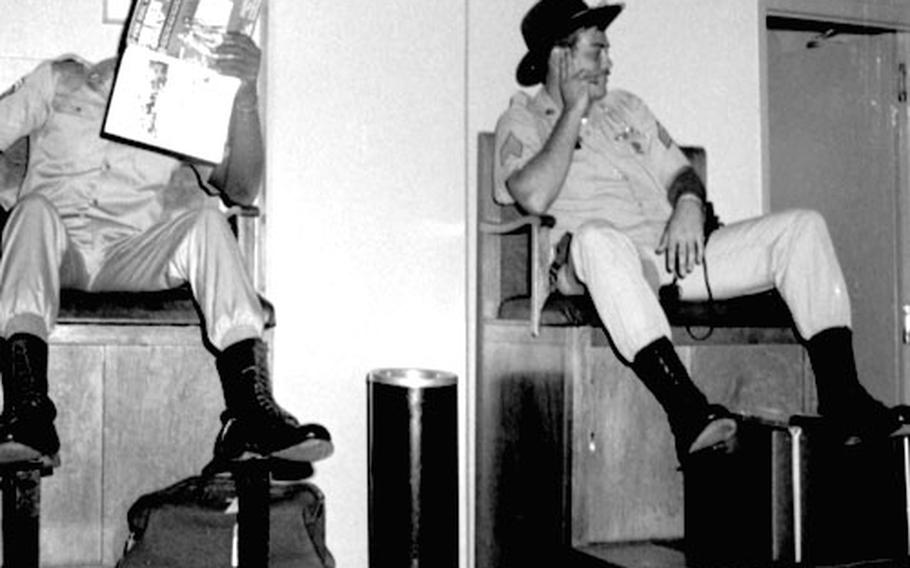 TOKYO - "This is my Liberty Bell, man," Sgt. 1.C. Gregorio S. N. Torre declared, brandishing the small brass bell he bought in a Saigon shop. "It's going to ring out my freedom when I get to Travis."

Torre was one of 752 U.S. servicemen who quietly passed through the Yokota AB Passenger Terminal Tuesday night and Wednesday morning and shrugged off a bit part in history - they were the first of the last American troops to leave South Vietnam.

Torre, a 42-year-old veteran of three tours in Vietnam, had just closed out his last, and could not resist a flamboyant gesture as he passed through a brisk customs check and stopover before his aircraft, one of eight, continued on to Travis AFB, Calif.

The beribboned bell clanked slightly and drew stares and chuckles as Torre, of Agana, Guam, opened his bags for air policemen and submitted to a shoulder to heels body search. He served as a combat medic in Quang Tri and Khe Sanh and most recently as an adviser in Quan Duc, by the Cambodian border. Then there was a tense wait at Camp Alpha inside Tan Son Nhut AB - and the heartbreaking delay caused by a temporary deadlock in release of American prisoners of war. They flew home suddenly, on joyously short notice - but not before Torre had time to buy his bell and resolved to ring it as his feet touched American soil.

"My wife's going to be waiting for me," Torre said. "She won't have any trouble finding me at all. All she has to do is listen for this bell."

The first C141 Starlifter from Saigon touched down at 11:48 p.m. Like seven others that followed roughly every half hour, it carried 94 men. All but one continued on to Travis. The last aircraft unloaded servicemen reassigned within the Far East.

Most of the servicemen had served only a few months in Vietnam before provisions of the cease-fire agreement sent them home. They were ludicrously out of uniform for Japan's waning winter chill as they disembarked for the stopover, wearing the short sleeved uniforms they had donned in Saigon, where it was 94 degrees when they left.

Most were glad to get out, but there were exceptions like Spec. 4 John R. Kaiser, 20, of Woolford, Md.

"I'm not so sure I want to go back," said Kaiser, who had been assigned to MACV Special Troops. "I like the country and I like the people. I was in a house with two or three Vietnamese families. They took me in like one of their own. It was beautiful."

Spec. 5 Jeff Coleman had only four months at the 3rd Field Hospital in Saigon, barely enough time to absorb a "new cultural experience" and hardly long enough for him to satisfy his wish to get a glimpse of war.

Capt. John E. Henson, an engineer, got mortared once in seven months, and "that was enough, believe me." He was on his way back to Baltimore to see his wife, two-year-old Cindy and three-month-old Robert, whom he has not seen. .

Sgt. 1. C. August U. Hubbard, Harrisburg, Pa., told of working all morning in the MACV Data Management Agency and being told at 11 a.m. he was going home. He was at Camp Alpha at 1 p.m. and on the first plane out shortly after that. His bags had been packed and stacked for weeks and he, like others, was keenly disappointed at the delay. But as a 42-year-old veteran of 24 years service, he easily shrugged it off.

"I thought of those POWs," Hubbard reflected. "If they can spend five or six years in prison, we could spend a few more days to get them back."

"We felt like prisoners when that was announced," recalled 21-year-old Spec. 4 Rex C. Simmons, Petersburg, Pa. "We just gave up and waited." After 19 days of waiting, Simmons said, he went home on a few hours notice - and said he could have pulled ten months as easily as four.

"I'm glad the war's over and the killing's over," Simmons said.

But the war had not been quite over for 1st Lt. Karen Wojtecki, Milwaukee, a 24-year-old Army nurse who spent her last night at the 3rd Field Hospital taking care of a young American helicopter pilot who was wounded in a post-truce incident. Like 1st Lt. Caroline Thibodeau, Manteca, Cal., she was notified and flown out so fast that there was no time for goodbyes to roommates and old friends. Both gamely submitted to being pressed into service as stewardesses on their flight. Miss Thibodeau carried a copy of journalist David Halberstam's "The Making of a Quagmire," a bitterly critical book written at the beginning of large scale American involvement in Vietnam. She said she found it "very interesting."