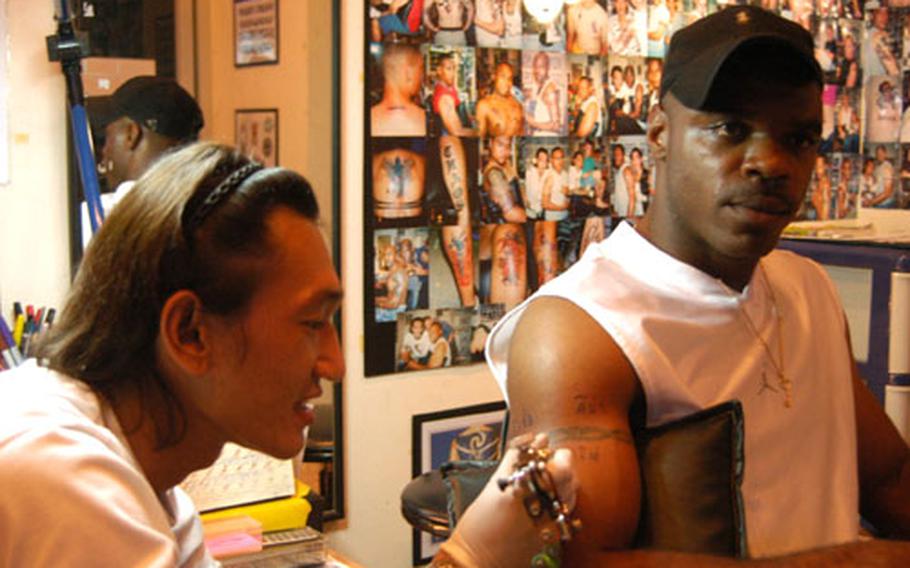 Tattooist Alex inspects a piece of work on the arm of Gunnery Mate 1st Class Jermaine White in Korat, Thailand. Alex, like many Thai tattoo artists, goes by only one name. (Seth Robson / S&S)

BANGKOK, Thailand &#8212; The walls of a tattoo shop in Korat, Thailand, are plastered with hundreds of photographs of newly tattooed U.S. military personnel. Cheap tattoos are one of many fringe benefits for personnel participating in the Cobra Gold 2004 exercise, which wrapped up in Thailand on Thursday.

According to the U.S. military, the annual exercise is to train servicemembers from the United States, Thailand, Singapore, the Philippines and Mongolia to work together.

However, the United States already is helping countries in the region, such as the Philippines, battle Islamic militants; and there has been speculation U.S. soldiers might be called in to help deal with Islamic violence in south Thailand, which has flared in recent weeks, leaving more than 100 dead.

U.S. Ambassador to Thailand Darryl N. Johnson attempted to put a damper on such guesswork, ruling out U.S. intervention in Thailand&#8217;s problems in the south at the Cobra Gold closing ceremony.

But that hasn&#8217;t stopped speculation about positioning U.S. forces in the north, at bases they already visit annually for Cobra Gold. Adding to the speculation is Thailand&#8217;s proximity to countries such as Malaysia and Indonesia, where the Islamic terrorist network Jemaah Islamiyah is active.

Such suggestions remain totally speculative. What has been indicated strongly by U.S. servicemembers at Cobra Gold is this: If the United States did establish a permanent presence here, Thailand would be a popular assignment.

During the Vietnam War, the United States operated large bases in Thailand, which has contributed troops and equipment to Operation Enduring Freedom in Afghanistan and Operation Iraqi Freedom.

Dallas also acknowledged that Thailand &#8220;sits in the Strait of Malacca. I don&#8217;t think it is lost on our military strategists as well as our politicians that this has strategic implications.&#8221;

And when they had time for rest and recreation, numerous tourist and cultural opportunities beckoned.

The chance to get a cool tattoo is one of many good things about Cobra Gold, White said. &#8220;It&#8217;s more relaxed than a lot of military missions. Even though we are here for an exercise, it&#8217;s almost like a vacation from the real world.&#8221;

The exercise also pumps millions of dollars into the Thai economy. If each of the 13,500 U.S. personnel at Cobra Gold spent $1,000 in Thailand, $1.3 million will have been added to the $25 million the U.S. government spent there on such things as transportation, hotels, food and interpreters.

Shops, restaurants and hotels in areas close to where U.S. troops are based, such as Korat or Pattaya Beach, display &#8220;Welcome Cobra Gold&#8221; signs and offer discounts to military personnel. To ensure nobody misses out, locals bring their goods to the troops, setting up stalls on the Thai military bases where U.S. servicemembers are staying. Young Thai women flock to hotels and bars to mingle with soldiers.

The most popular nightclub district for troops is Pattaya Beach, in southeast Thailand, offering several miles of bars and shops geared toward Western tourists.

Male military personnel walking along the beachfront can expect to be propositioned by dozens of Thai prostitutes. As one young soldier put it: &#8220;Going out in Pattaya Beach is like being a rock star surrounded by groupies.&#8221;

But sometimes the partying turns bad. Marines said they were banned from Pattaya Beach for two nights after a comrade fell nine stories out of a hotel window and miraculously incurred only some broken bones.

&#8220;Thailand does have its share of temptations,&#8221; Hutchens said. &#8220;As part of force protection briefings and education programs, U.S. military forces receive extensive training and education on the dangers of participating in illegal and illicit activities such as prostitution, and are briefed on the high AIDS rate in Thailand.&#8221;

Cobra Gold is an opportunity for young soldiers, airmen, Marines and sailors to experience Thai culture and see &#8220;a beautiful country with a gracious and beautiful people,&#8221; Hutchens added. U.S. personnel, he said, have enjoyed elephant rides and tours to temples and the Bridge on the River Kwai, built by Allied prisoners of war when Thailand was occupied by Japan during World War II.

Cobra Gold is designed to shape reaction to a regional crisis and prepare multinational forces to conduct peace enforcement operations, he said.

At the week&#8217;s end, U.S. personnel packed their bags, and some kissed their Thai girlfriends goodbye, before heading for military flights out of the country.

And planning for Cobra Gold 2005 already had begun.