Part of the prep-work students in the Combat Life Saver course go through before sticking each other in the arm with needles is to practice run on one of these dummy arms, filled with fake blood to make the process more realistic. (Ben Murray / S&S) 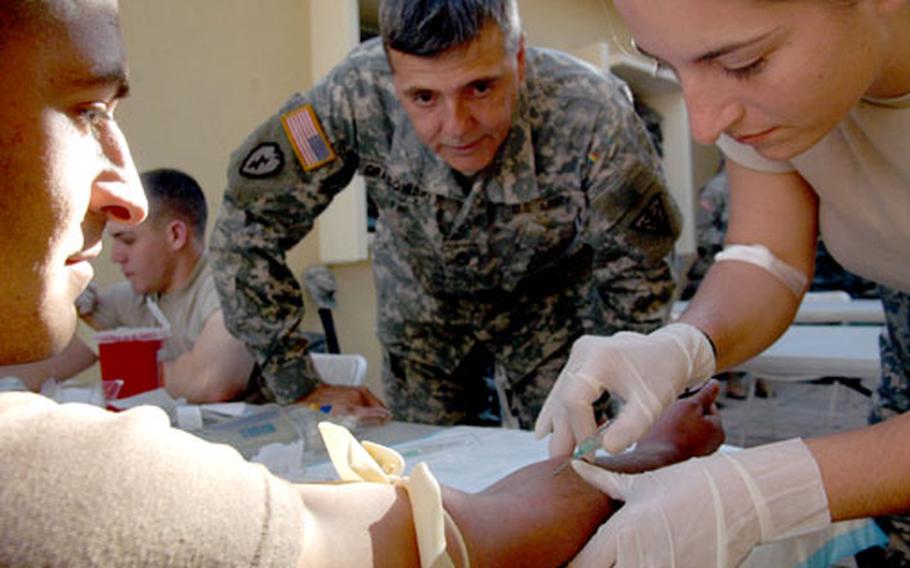 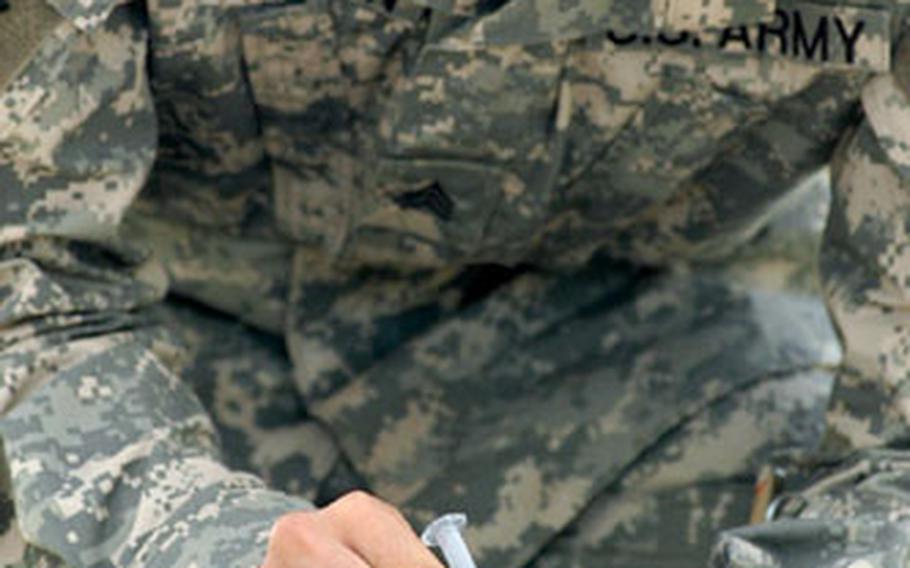 It will come with a tremendous roar from the roadside or quietly out of nowhere from a hidden position, and all of a sudden someone will be wounded. When that happens to a servicemember in Iraq, the first and often only source of care is another soldier or Marine.

To make sure servicemembers can keep each other alive, the military looks to the Jameson Combat Medic Training Center in Balad.

The center trains military personnel on everything from basic combat life-saving skills to advanced treatment courses, and is the only place in Iraq to offer the upper-level Combat Medic Advanced Skills Training, said program director Sgt. 1st Class Michael Manahl.

Named after Nebraska National Guardsman Staff Sgt. Tricia Jameson, a medic who was killed in Iraq in 2005, the school cycles through around 200 soldiers and a few Marines each month, Manahl said. Many are enrolled in the Combat Life Saver course, a basic curriculum that teaches troops how to keep their buddies alive after traumatic injuries in the field.

The program keeps things simple. The CLS course takes the top preventable reasons soldiers die in the field and shows students how to deal with them.

According to course coordinator Staff Sgt. Larry Donihoo, the top killer of troops in Iraq by far is severe bleeding from the traumatic loss of a limb &#8212; normally the result of an improvised bomb explosion.

Following that is a condition called &#8220;tension pneumothorax,&#8221; a medical term for the air pressure that builds up in the chest when someone is shot in the upper body, which, if untreated, can quickly cripple the lungs and heart.

Beyond that, participants &#8212; including civilians and contractors &#8212; learn a variety of other life-saving skills, including how to treat blast wounds and burns and how to improvise a litter out of blankets.

Participants also learn how to prioritize patients, which sometimes means not treating them at all, Donihoo said.

Likewise, cardiopulmonary resuscitation (CPR) is not taught in the class for practical reasons: Troops die from loss of blood, shock and gunshot wounds, and keeping a casualty from reaching the stage where he needs CPR is the bigger goal, instructors said.

In order to make sure students experience the gritty reality of combat care in the CLS class, things tend to get a little messy.

In the first few hours of the course, students are already inserting nasal pharyngeal airways into each other&#8217;s throats &#8212; flexible plastic tubes lubed up and inserted through the nose.

By day two, they&#8217;re sticking each other with needles to insert intravenous catheters. The course ends with a mass casualty exercise that simulates a mortar attack on a convoy, to which troops have to respond while wearing full battle gear and carrying their weapons.

For medics, things are even harder. In one scenario in the CMAST class, students have to low-crawl into a darkened room ringing with imitation gunfire, find a patient (who often has a simulated severed limb) and treat major wounds before dragging them out to perform further care.

It&#8217;s a jarring, difficult endeavor, complicated in part by the realistic qualities of the dummy used for the medics: a fully responsive, computer-driven mannequin called the METI-man.

Students in the class said they signed up for a variety of reasons. Some were part of units attempting to get everyone trained in CLS, others were looking ahead to further training to be an EMT or medic.

Sgt. 1st Class John Maher from Battery C, 3rd Battalion, 4th Air Defense Artillery Regiment, said his unit has just one medic for 120 soldiers, making it likely that if something were to happen, other soldiers would have to provide treatment.