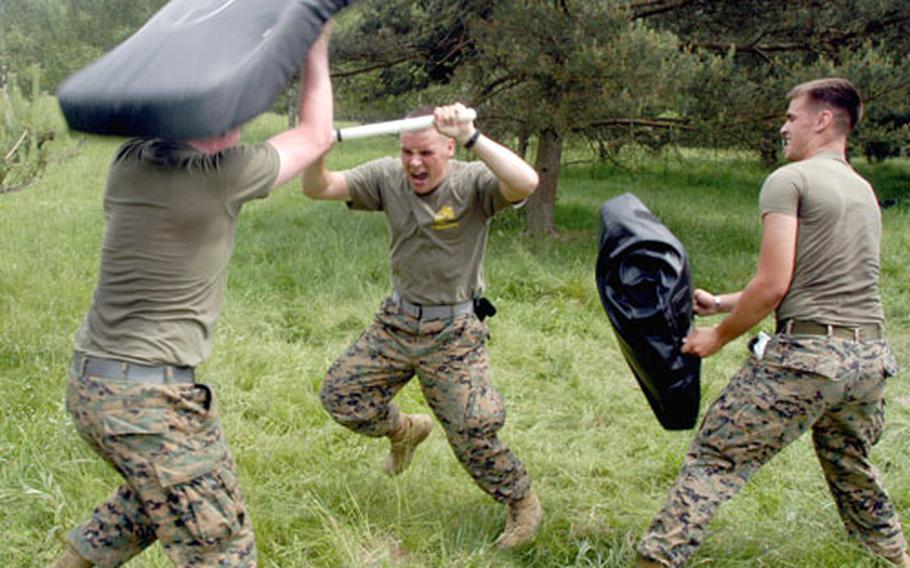 Lance Cpl. Timothy Comeau of Marine Corps Security Forces Europe, center, trains on blocking blows with his baton Thursday after being wiped in the face with pepper spray during a class dealing with nonlethal weapons in Böblingen, Germany. (Charlie Coon / S&S)

&#8220;It teaches you what the stuff does, so you don&#8217;t put people through something they don&#8217;t deserve,&#8221; said Pfc. Steven Shepherd after getting a face full of oleoresin capsicum, or pepper spray.

Shepherd, of the Hohenfels-based 7th Army Training Command, was among about 65 troops on Thursday training with nonlethal weapons near Panzer Kaserne.

Next week, the group of soldiers and Marines will demonstrate nonlethal weapons and tactics to troops visiting from European and African nations.

The goal is to teach troops how to control people and crowds without killing them, according to Capt. Roberto Rodriguez, a nonlethal-weapons instructor with U.S. Marine Corps Forces Europe.

He gave as an example clearing a landing zone for a helicopter bringing relief supplies.

Other situations in which the tactics could help include stopping a confused person who fails to heed warnings while approaching a checkpoint, and marking the agitators of an unruly crowd with paintballs for arrest later.

These weapons and tactics fall somewhere between a bullhorn and a bullet, according to Laura Falkenbach, the nonlethal-weapons program manager for U.S. European Command.

On Thursday, Marines and soldiers were sprayed or wiped in the face with pepper spray, and then, while blinded, made to run a gantlet of nonlethal exercises &#8212; such as taking down opponents, jamming them with batons, and fending off 2-on-1 attacks &#8212; just in case they had to stop a riot for real while accidentally sprayed.

Army Sgt. Jose Orive, of the 501st Military Police Company in Wiesbaden, said he could see uses for the nonlethal tactics.

Others just appreciated the cross-training.

The training culminates Wednesday with an exercise for troops visiting from Croatia, Czech Republic, Ghana and other nations.