Troops laugh it up with visiting comics 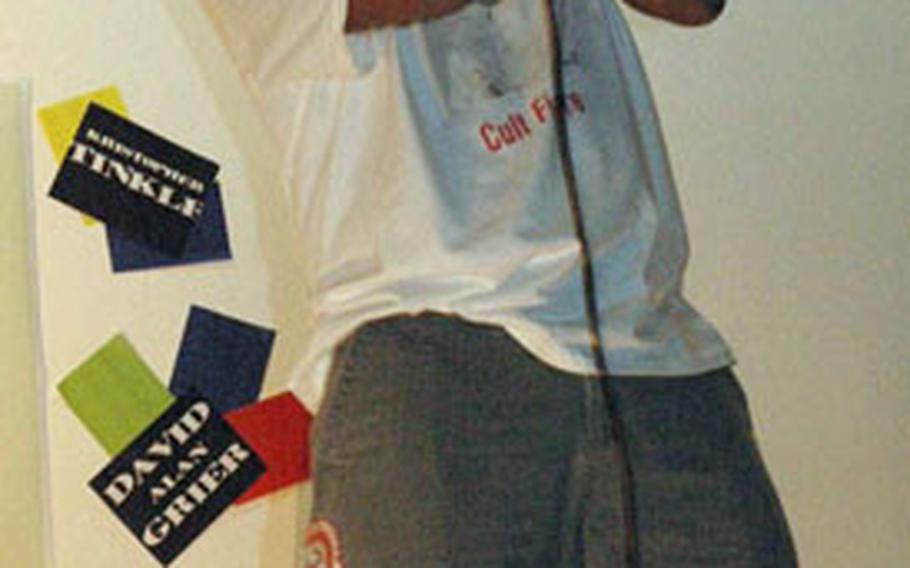 BAGHDAD &#8212; David Alan Grier of the 1990s TV series &#8220;In Living Color&#8221; and two fellow comedians kicked off a three-day visit to the Baghdad area with a show Saturday night for nearly 300 delighted troops.

With routines lasting almost a half an hour each, Grier, Kevin Avery and Kristopher Tinkle offered their audience at Forward Operating Base Loyalty little on the war, the military or Iraq.

Instead the men focused on such universal topics as jobs, relationships and, of course, sex.

Avery, a comic who often opens for comedian Dave Chappelle, moaned about his latest blind date.

Desperate for conversation, he brought up the Civil War.

Tinkle, meanwhile, who was a guest on the Howard Stern Comedy Tour, joked about his &#8220;real&#8221; job, substitute teaching, and the reactions he gets from kindergarteners when they hear his last name.

Much to the audience&#8217;s amusement, Tinkle also deftly handled a persistent heckler, ultimately offering him a universal hand signal that wasn&#8217;t a thumbs-up.

But the evening&#8217;s headliner was clearly Grier, who opened his act with an unprintable joke about firebrand cleric Muqtada al-Sadr and his choice of Sadr City as a neighborhood.

Grier quickly moved on to a long and physical riff about running the Los Angeles marathon that had some soldiers literally rolling out of their seats with laughter.

He said it took him four hours and 26 minutes, &#8220;which means that people were walking faster than I was running at the end of the race.&#8221;

However, Grier said, he did train in advance for the big day by joining a running club.

He then mimed runners performing a variety of personal hygiene activities usually confined to private spaces.

Grier said he volunteered to make the trip, his first to Iraq, and then recruited friends Tinkle and Avery to accompany him.

He said after the show that he wasn&#8217;t particularly concerned with the danger.