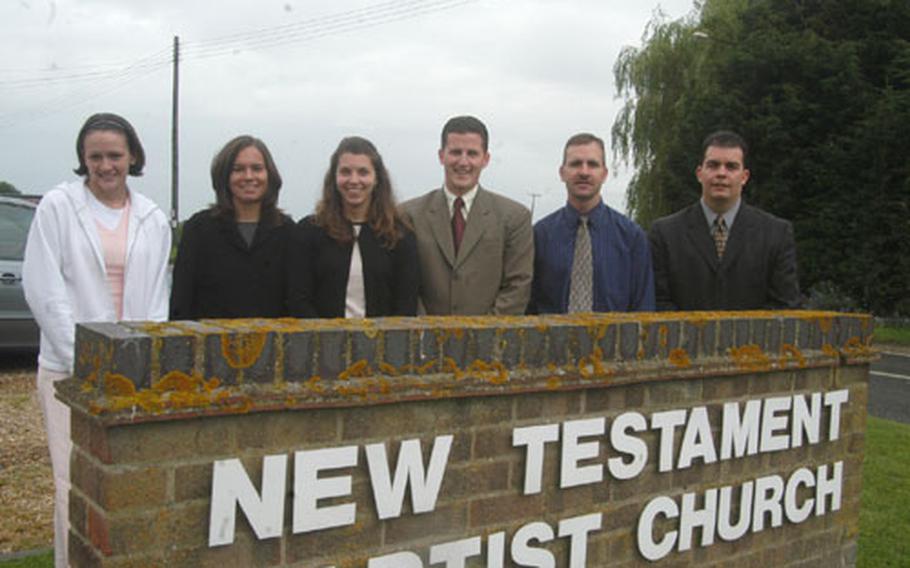 KENNY HILL, England &#8212; A team of churchgoers from the New Testament Baptist Church &#8212; including active-duty personnel from RAF Lakenheath and RAF Mildenhall &#8212; will visit Romania in August to provide children with a Vacation Bible School.

Ten people from the church near RAF Mildenhall will provide children in the city of Oradia with Bible lessons, songs and arts and crafts in an attempt to reach a new generation of Christians in the former communist nation.

Children at the church in England raised money last week at their Vacation Bible School to help the children of the church in Romania. The daily offering taken during the week was about $2,600, said the Rev. Todd Adams, one of the church&#8217;s pastors.

The church has been ministering to people in Romania for about 10 years, said Adams, who will go to Romania with the group. He said Christians in Romania were able to worship during the communist era, but the church was under state control.

Master Sgt. Jake DeField of the 48th Aircraft Maintenance Squadron at RAF Lakenheath, said he found a country filled with believers when he went on a humanitarian mission with the pastor.

Now able to worship openly in a manner of their own choosing, the Romanians are hungry for knowledge about Jesus, Adams said.

Adams and his brother, Troy, also a pastor, will leave Thursday in a car donated to them by Auto Village, a dealership near the bases. They will tow a trailer packed with goods.

Eight church members will follow on Friday, flying to the country. They will return Aug. 17.

This will be the fourth time the church has held a Vacation Bible School in the country. Adams said the team was told to expect 30 children the first time.

For most of the team members, the trip will not only be their first visit to Romania, but also their first foray into any type of missionary work.

Henderson said she is eager to see the Lord&#8217;s work in a mission environment. She expects to return, she added, &#8220;more thankful for what I have and what God provides for me.&#8221;

Staff Sgt. Joshua Sandifer, of the 100th Maintenance Squadron at RAF Mildenhall, said he has been impressed by stories from Adams&#8217; visits.

He is hoping perhaps to go into missionary work after his military career, he added.

Adams said it is one thing to send money for projects in countries such as Romania, but another thing altogether to go there in person.