Soldiers taking the opposite route encounter the command group around the halfway point of the 25-mile "Manchu Mile" hike near Warrior Base, South Korea, on Tuesday. The event is a tradition of the 2nd Infantry Division&#39;s 2nd Battalion, 9th Infantry Regiment. It commemorates an 85-mile hike and battle by the regiment during the Chinese Boxer Rebellion in 1900. (Erik Slavin / S&S)

Soldiers taking the opposite route encounter the command group around the halfway point of the 25-mile "Manchu Mile" hike near Warrior Base, South Korea, on Tuesday. The event is a tradition of the 2nd Infantry Division&#39;s 2nd Battalion, 9th Infantry Regiment. It commemorates an 85-mile hike and battle by the regiment during the Chinese Boxer Rebellion in 1900. (Erik Slavin / S&S) 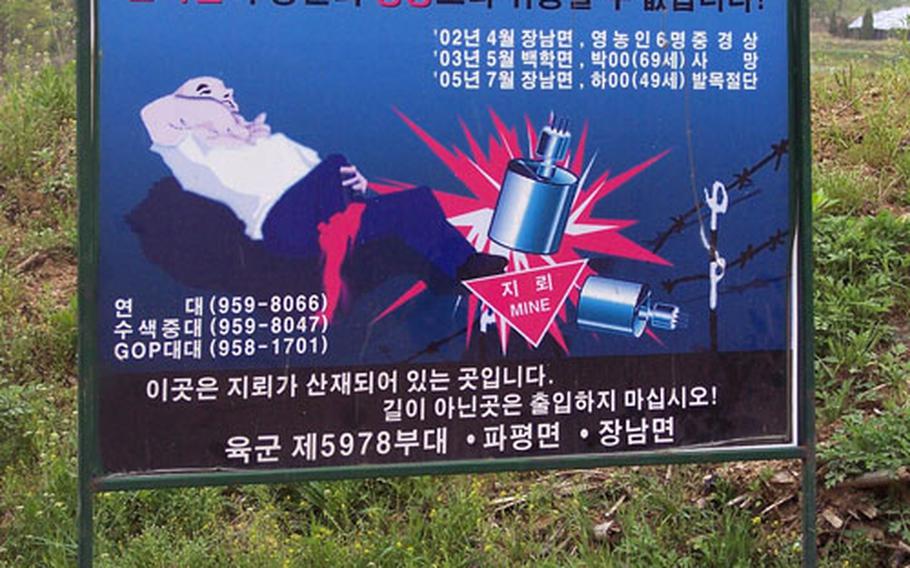 This illustration is a handy reminder not to cross the barbed wire, which fences off the minefields of the Demilitarized Zone. It appeared around Mile 20 of the 25-mile "Manchu Mile" hike near Warrior Base, South Korea, on Tuesday. (Erik Slavin / S&S) Soldiers from the lead group stand at attention as the regimental bell rings following their completion of the 25-mile Manchu Mile around Warrior Base, South Korea, on Tuesday. (Erik Slavin / S&S) Pfc. James Roberts tends to his feet at the halfway point rest stop during the 25-mile Manchu Mile around Warrior Base, South Korea, on Tuesday. (Mike Nicholson/Courtesy of the U.S. Army) 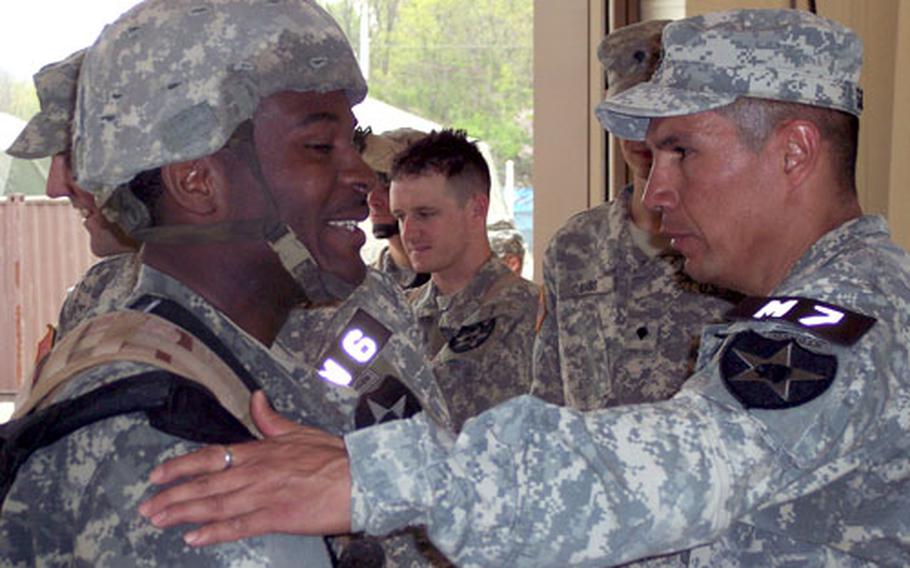 The hill rises steadily and steeply beyond the rice paddies, following a dirt road into a tangle of shrubs huddled under oak and cherry trees.

When our lead group of about 20 soldiers and guests reaches what appears to be the top, the trail banks right and climbs even higher.

Yes, major, I call that a hill. My left calf, which feels like a singular mass of bruises, calls that a hill.

My right calf would call it a hill too, if it had any feeling left in it.

Another soldier and I begin losing ground on the pack.

Three miles from finishing the Manchu Mile. Too close to quit. But at this moment, I wonder if I&#8217;m going to be left behind in the dust.

Fifteen buses full of soldiers from the 2nd Infantry Division&#8217;s 2nd Battalion, 9th Infantry Regiment crossed the Imjin River just after sunset Monday night and stopped at a base surrounded only by farms and minefields.

Warrior Base&#8217;s main gate is a short walk from the barbed wire marking the Demilitarized Zone that separates the two Koreas. Its adjoining firing ranges have been operating since the Korean War, but the two-story barracks buildings are relatively new.

Each room in the buildings holds 50 double bunks, enough for the support personnel and 602 soldiers filing in for Tuesday&#8217;s hike.

The Manchu Mile tradition has gone through several incarnations, but the hike is now held twice annually. It commemorates the 9th Infantry Regiment&#8217;s long march in battle during the Chinese Boxer Rebellion in 1900.

These soldiers are good enough at math to know that Rauhut is underestimating the full length of their full-gear hike. That&#8217;s why a few of the 99 soldiers in one of the barracks rooms were wondering why a civilian guy would be with them.

Soldiers who complete the hike earn a distinctive belt buckle adorned with the regiment&#8217;s Chinese dragon insignia. Second-timers, like Copeland, get a commander&#8217;s coin, while a third finish earns an Army Commendation Medal.

Copeland was matter-of-fact about his motive.

The lights came on at 5 a.m. Tuesday. The soldiers assembled at 6:30 a.m. in front of the gate, listening to words of encouragement from Rauhut and Command Sgt. Maj. Bobby Gallardo, followed by a safety briefing by Sgt. Maj. Eliodoro Perez.

At 7 a.m., the command group marched out the main gate, followed by companies in 15-minute intervals. The first mile was marked off by quarter-mile signs.

They went quickly, as the command group established a pace between four and five miles an hour.

The pace slowed after the first rest stop near Mile 8, but not by much. By the second stop near Mile 13, most soldiers were covering their feet in whatever kept their emerging blisters from rubbing raw.

Pfc. Darius Luedtke was calf-deep in foot powder. Luedtke, a scout, is half-German and hiked 19 miles in a timed event while in the German army. He likes the Manchu Mile better because of its history and because it gives him time to think.

By the Mile 19 rest stop, the overcast sky produced a steady drizzle.

Medics passed out ibuprofen like party favors. The soldiers savored the quick energy of apples and oranges while rubbing the hotspots and broken blisters on their feet.

McIntyre encourages his fellow soldiers by singing high-pitched hits from the Backstreet Boys, Journey and Limp Bizkit. But his tour de force was &#8220;Barbie Girl&#8221; by Danish one-hit wonder Aqua.

Soldiers hiking with him said they never once considered throwing him in one of the nearby minefields.

By now, the soldiers have heard the mantra more times they can count.

They did keep firing, taking two days to capture the enemy fortress.

I thought about what they did while I hiked the last few miles of the Manchu Mile.

I thought about how I&#8217;d feel about doing it again the next day and then for a third day but adding an extra 10 miles, and then trying to see straight, shoot straight and capture a enemy fortress for the next 48 hours.

Rauhut is right. What we are doing, in comparison, is only a mile.

The next few miles were less eventful, until someone cued the music from a fence line in the distance. We arrived after hiking 25 miles in seven hours to the sounds of Black Sabbath, followed by a little Bad Company.

But no one dropped to the ground. The aches and pains waited for the belt buckles, the coins, the handshakes and the hugs.

Capt. Guillermo Rojas recently joined the Army after coming over from the Air Force and couldn&#8217;t remember his longest hike before the Manchu Mile.

Even &#8220;I&#8217;m just doing my job&#8221; Copeland spoke with enthusiasm when he arrived with the headquarters company group.