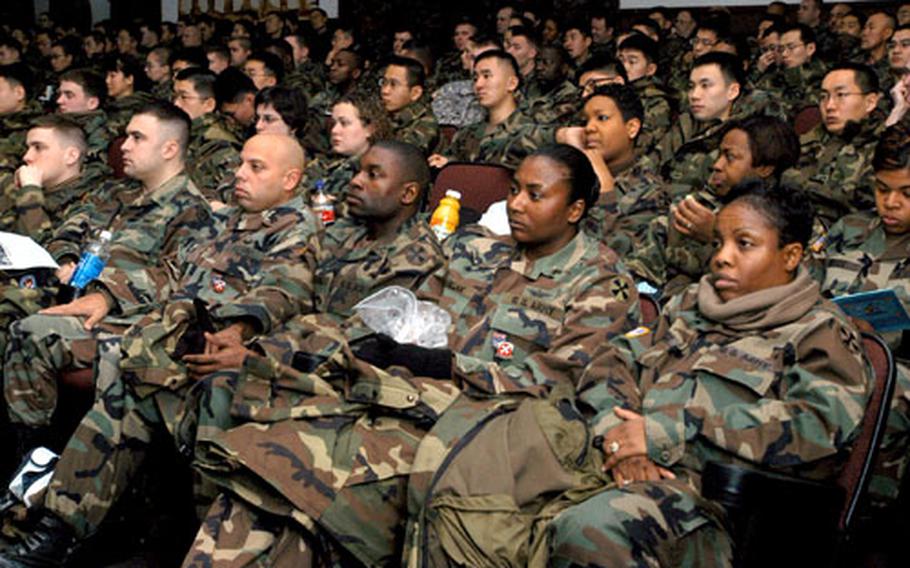 YONGSAN GARRISON, South Korea &#8212; Tuesday was the 8th U.S. Army&#8217;s New Horizons Day, a twice-yearly session at which soldiers and officers are urged to remember their responsibilities toward American co-workers and South Korean neighbors alike.

Soldiers and officers of all ranks were required to participate in the all-day training, which covered topics ranging from alcohol use, curfews and off-base behavior to safety reminders, Korean traditions and the Good Neighbor Program.

But while both groups were reminded to emphasize safety training and bring along a &#8220;battle buddy&#8221; when going off-post, 8th Army&#8217;s senior leadership also reviewed the challenges of monitoring and protecting U.S. soldiers when they are off-post in a foreign country.

At a senior leadership briefing in 8th Army&#8217;s headquarters, Command Sgt. Major James Boiling urged officers to remind soldiers about the areas that are marked &#8220;off-limits&#8221; to servicemembers. The bars and areas of town often are deemed off-limits to military because they support prostitution, though Army officials are limited in how much patrolling they can do off base, Boiling said.

The situation not only can lead to illegal sex, it also can put servicemembers in precarious situations that the U.S. military can do little about, such as fights, he said.

Recently, three U.S. soldiers got into a fight with 14 South Koreans in Hong-ik, a university neighborhood in Seoul that is off-limits to servicemembers, according to Lt. Col. David Ward, 8th Army HHC battalion commander. He said South Korean, not U.S., officials decide whether to prosecute in that type of situation.

Boiling also talked to the leadership about the servicemembers&#8217; curfew and about how many soldiers work around it. The curfew requires servicemembers to be on base, or at a place of residence, from midnight to 5 a.m. nightly or from 1 to 5 a.m. on weekend and holiday nights.

Many soldiers go to friends&#8217; off-post homes or rent a hotel room to have an all-night party, Boiling said.

There are proposals now that might limit the policy to the servicemember&#8217;s own residence, rather than a friend&#8217;s, and might limit hotel room guests to those names registered with the hotel, he said.