Troops in Iraq yearn to use pool 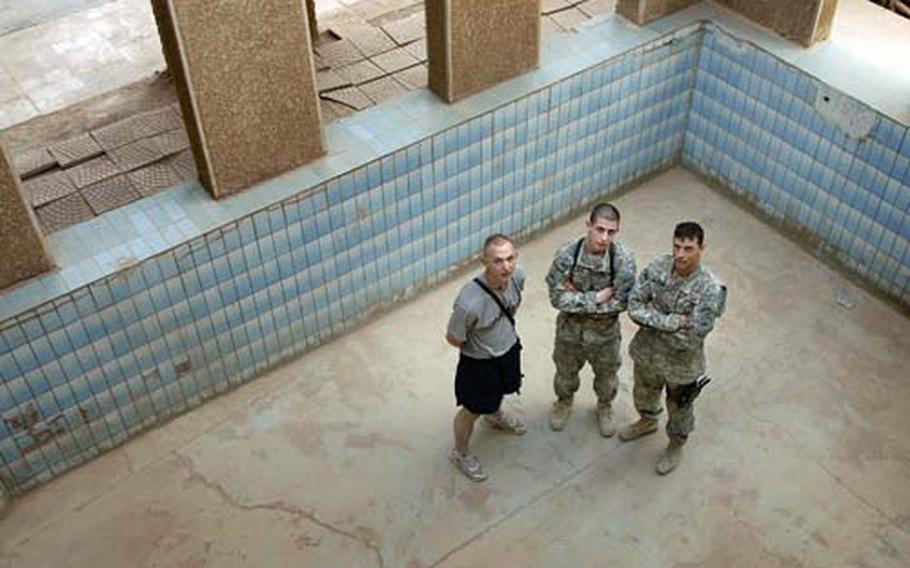 There&#8217;s no water in it; no working pump; no chlorine to treat the water. Right now, it&#8217;s just a vacant concrete hole that some time long ago was a refuge from the blazing heat of Iraq. Soldiers with Baumholder, Germany&#8217;s Company B, 1st Battalion, 35th Armored Regiment hope to make this pool their oasis.

But they find themselves at an impasse.

The soldiers here envision soaking in their would-be, could-be aquatic retreat on their off days, just as other deployed U.S. troops do at pools on military bases in the Middle East.

The house at the patrol base has this fixer-upper of a pool, which previous units posted here used as a trash pit. Soldiers with Company B&#8217;s 4th Platoon, known as "The Billy Goats," arrived at the patrol base in mid-February and saw the pool&#8217;s potential. Soldiers including Pfc. Sean Morgan and Spc. Paul Ellis have cleaned it out. They even sweep the empty pool to keep it clean.

With their on-site well, soldiers could easily fill the pool with water, but they don&#8217;t have the goods to make it a properly functioning pool.

Each platoon at the patrol base has one day a month off to unwind. They&#8217;d like to spend those precious days off cooling out in the pool.

"If we can get it working, on those days we can just sit around and relax, especially when it gets 140 degrees here," McMahan said. "It&#8217;d be nice to cool down."

Company B&#8217;s top enlisted soldier knows with high temperatures around the corner what a working pool would mean for the soldiers here.

"It would just be great to get the pool hooked up so the soldiers have someplace to relax," said 1st Sgt. William O Connor. "We can have it for the unit that relieves us because it&#8217;s going to get hot soon."