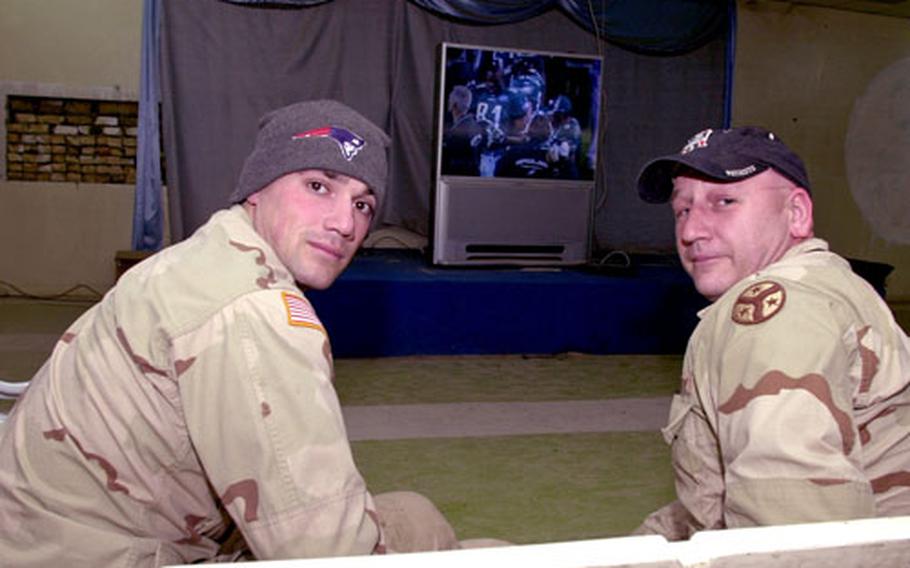 Take all that Super Bowl ad money and buy a clue.

It&#8217;s hard enough getting up in the middle of the night, Iraq time, to watch football. Even the Super Bowl. So, when all they have is Red Bull and alcohol-free beer, soldiers need somebody besides Paul McCartney to party, especially for a low-scoring, defensive game.

At 7:32 into the third-quarter, Fox finally shows a close-up of a cheerleader, drawing a hoot from the crowd.

The refrain here at this small base outside Tikrit is, next year will be better.

Less Paul McCartney, more Britney Spears, says Payton. More beer, chicken wings, women, and, most importantly, sleep back in the real world instead of missions, mud and microwave popcorn fished out of care packages in a corner of the dining facility.

Only about 35 soldiers out of more than 200 here got up before the chickens and made it to the dining facility for the game, especially with 1st ID troops preparing to return home to Schweinfurt, Germany, via Kuwait. Many of the rest watched it in their barracks.

Especially Philadelphia Eagles fans. It&#8217;s the sound of one man clapping when the Eagles get on the board first with a touchdown at 9:35 to go in the first quarter.

Just how soldiers view the game goes far beyond winning and losing to whether they&#8217;re coming or going. Simmons and his 1st ID comrades are on their way home.

Representing the newly arrived National Guardsmen is the Boston contingent sitting right in front of the TV. The game was the same as last year &#8212; Pats win &#8212; when he was back home in Boston &#8220;minus the beer and women,&#8221; says Spc. Ryan McLane, 23.

These guys are hard-core fans, and McLane and Staff Sgt. Fred Vestal, 42, with the 42nd Infantry Division &#8212; attached to the 1st Squadron, 278th Regimental Combat Team out of Tennessee &#8212; are sporting Patriots headgear.

Homies Sgt. James Gallagher, 28, and Spc. Jose Perez, 24, round out the Boston foursome.

It&#8217;s a &#8220;fantastic&#8221; game, McLane says. The most fun since the Red Sox came back from three games down in October to beat the New York Yankees in the American League Championship Series, Vestal says. The Red Sox would go on to win their first World Series in 86 years.

Ah, except now, it dawns on them they have 10 months left in Iraq, not to mention a year till the next Super Bowl.