Troops in Iraq give thanks, get away from war for a bit 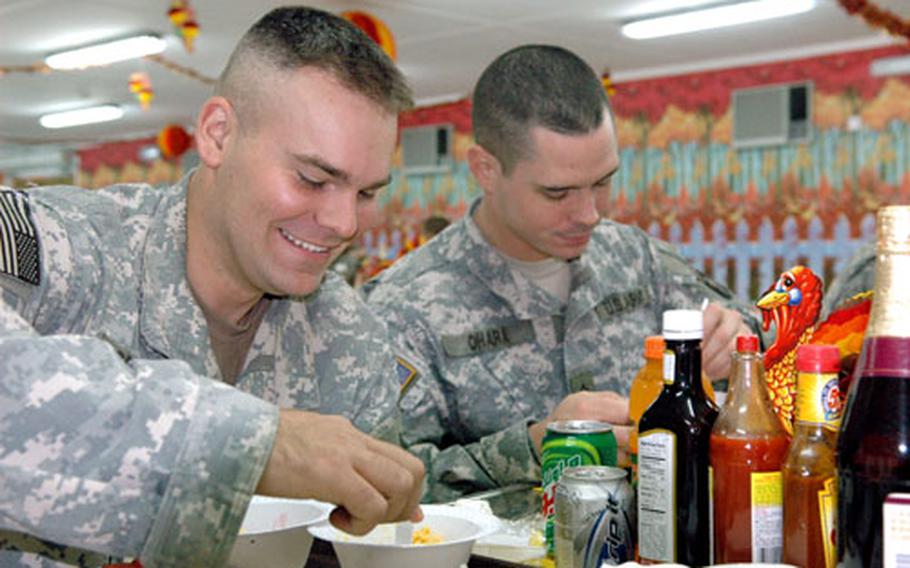 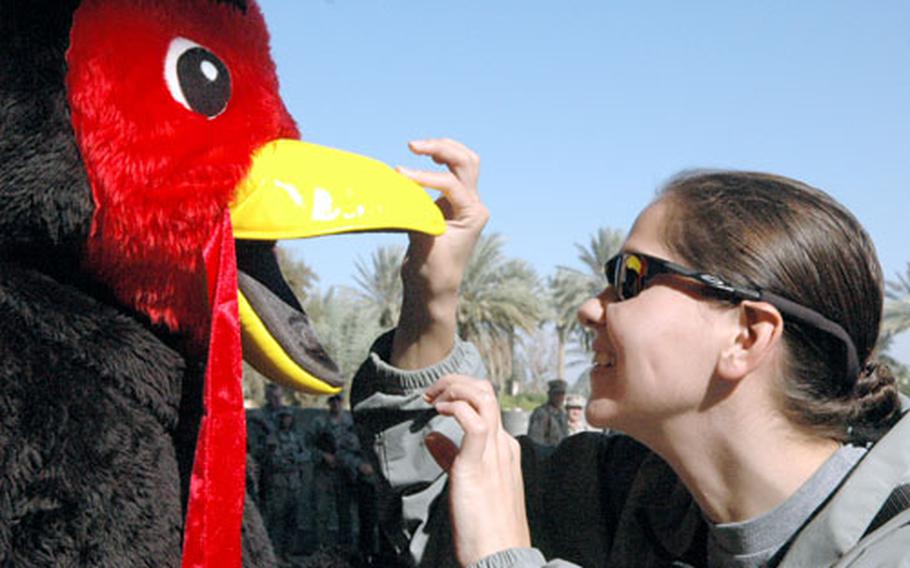 Roasted glazed pigs, their mouths stuffed with apples, suitcase-sized cuts of lamb and beef, festive ice sculptures, buckets of shrimp, cases of sparkling grape juice and platter upon platter of pies and cakes were just a few of the treats served up to soldiers Thursday in the compound&#8217;s richly marbled sanctuary.

The palace, which was named for the four enormous busts of Hussein that once graced each corner of the mansion, was just one of a number of Green Zone dining facilities that celebrated the holiday in high style Thursday.

Four Heads Palace, in fact, may never have seen as lavish a spread &#8212; even during Saddam&#8217;s reign. The building was completed only months before the 2003 invasion.

While the palace dome is shattered and lopsided from the invasion, the banquet area Thursday was a world away from the war. As movie screens showed photo montages, soldiers dressed as both Native Americans, pilgrims and at least one turkey milled about the room. Small teepees, colored streamers and lights and an enormous gingerbread reproduction of the palace rounded out the experience.

The banquets were, according to soldiers, a pleasant and almost embarrassing surprise.

The spread was, according to food service contractor KBR, part of a concerted plan to both wow soldiers and thank them for their service in Iraq.

Not far from the Camp Prosperity &#8212; home to the 4th Brigade of the 3rd Infantry Division &#8212; soldiers at Camp Al-Tawheed or &#8220;Union&#8221; dined on lobster tails, a finely frosted Bible cake and all the traditional Thanksgiving trimmings.

It was at Camp Prosperity that Sprague and more than two dozen members of his company formed their own long banquet table, bowed their heads in prayer and then attacked heaping plates of food.

Tablemate Sgt. Morgan O&#8217;Hara agreed that the feast caught him by surprise. O&#8217;Hara said the last time he spent Thanksgiving in Iraq, he spent the day pulling perimeter guard on the desolate Syrian border near Sinjar. Except for a plate of freshly killed and roasted turkey, his greatest luxury then was a full box of baby wipes.

Now, two years later, the 30-year-old Monmouth, N.J., native said he was shocked by the lavishness of Thursday&#8217;s meal, as well as the many other amenities he now found in the Green Zone.

O&#8217;Hara, who belongs to the same unit as Sprague, said there was something else that changed drastically since his first Iraq tour &#8212; the insurgents.