Troops in Iraq get deep dish pizza from Chicago 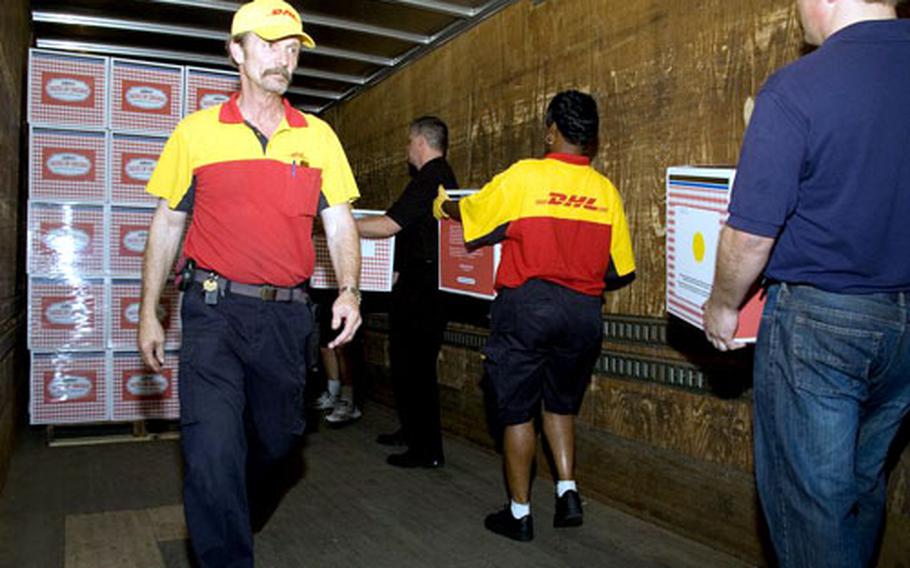 WASHINGTON &#8212; Troops at seven bases in Iraq will get fresh deep dish pizza straight from Chicago today, courtesy of an idea from a retired airman and the generosity of hundreds of others.

The 3,000 pizzas &#8212; each with a pound of cheese and packed with other toppings &#8212; were cooked by Lou Malnati&#8217;s Restaurant staffers last week, then shipped though New York, Belgium and Bahrain on their way to U.S. troops around Baghdad.

The logistical nightmare of frozen freight and military regulations cost nearly $100,000 to pull off, most of that coming from donations from the restaurant chain and DHL Express.

But the idea came from retired Master Sgt. Mark Evans and his 16-year-old son Kent, Illinois residents who have sent much smaller care packages to overseas troops in the past

"Then he asked if we could get some over there."

Over the next month Evans contacted local eateries, shipping companies and military officials in Iraq, coordinating all the details needed to get Chicago&#8217;s signature dish delivered on the other side of the world.

Originally, Evans said, he hoped for about 300 pizzas to be sent overseas, but as donations poured in to his Pizzas 4 Patriots charity the plans quickly expanded.

Evans said Malnati&#8217;s immediately volunteered to help, donating most of their stock for the popular "Taste of Chicago" event this weekend for the effort. DHL global service manager Ethan Mattern called the delivery a tremendous challenge "but a fantastic idea" that the company was happy to participate in.

The pizzas arrived in country Thursday night, and were transported to dining facility cooks with instructions on how to prepare them. Evans said CENTCOM officials promised him the thick delicacies would be part of July Fourth celebrations for several thousands of troops.

Evans said he hopes to turn this effort&#8217;s success into a recurring charity. He&#8217;s disappointed that despite everyone&#8217;s work pizzas won&#8217;t make it to Afghanistan, and already has plans to fix that for future holidays. But he&#8217;s also thrilled that he could bring a small slice of home to troops on July Fourth.

For more information on the charity, visit www.pizzas4patriots.com.