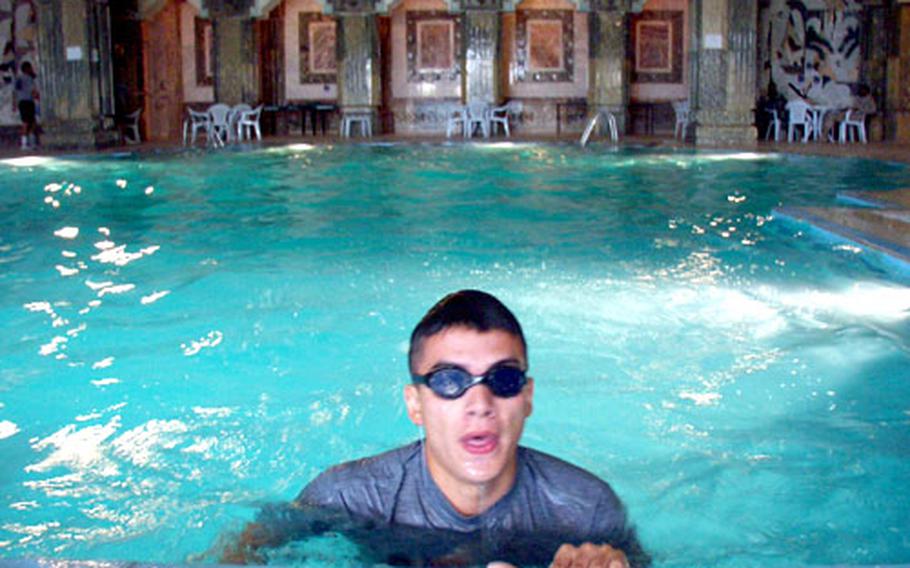 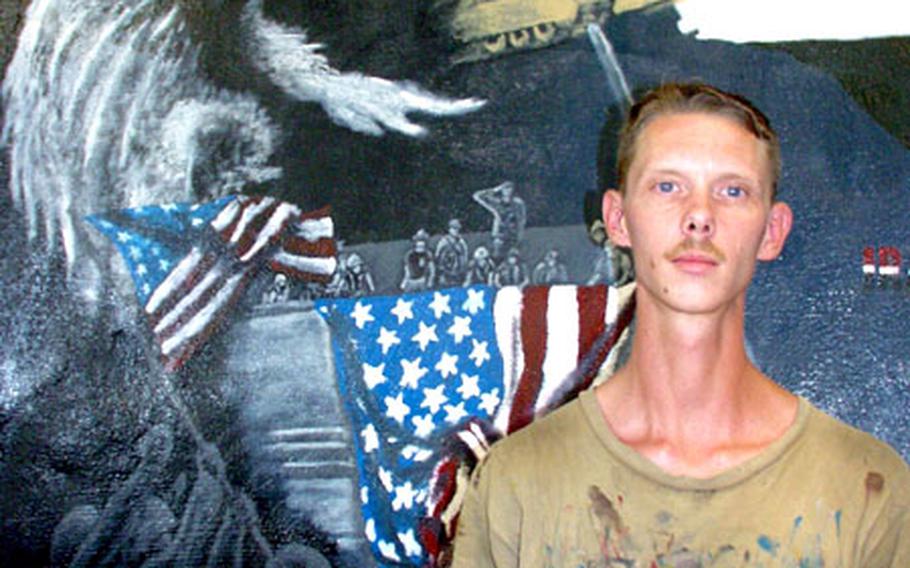 Army Staff Sgt. Timothy Himburg stands in front of a mural he painted at Camp Dogwood. Many of Himburg’s murals are scattered throughout the camp. “It helps me pass the time,” he said. (Scott Schonauer / S&S) 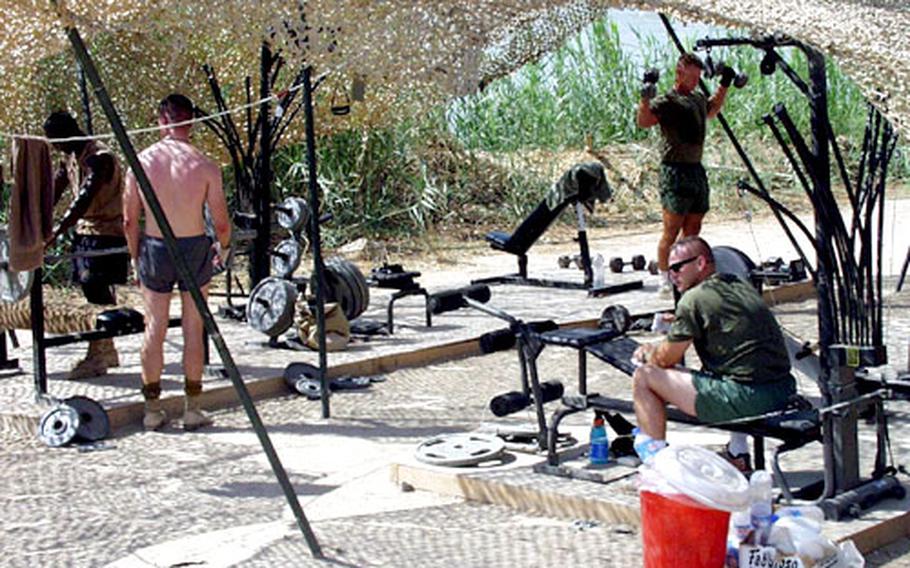 Lifting weights has a refreshing effect on many troops. While some have access to equipment such as benches and dumbbells, others lift sandbags or other heavy objects. (S&S)

Stars and Stripes asked servicemembers of all ranks to share their secrets for curing the deployment doldrums.

&#8220;The soldiers who get into trouble emotionally are the ones who focus on &#8216;I want to go home.&#8217; A day drags on like a month,&#8221; said Capt. Brett Navratil, a chaplain with 2nd Squadron, 3rd Armored Cavalry Regiment in Fallujah, Iraq, who advises troops to focus on anything besides going home.

Here are some other suggestions:

&#182;Work out: Keeping the body strong helps keep the mind strong, said Staff Sgt. Amador Guarionex, a tanker with the 1st Armored Division&#8217;s 1st Battalion, 37th Armor Regiment. &#8220;Working out actually motivates me. It releases stress and helps me get rid of all that aggressiveness after coming back in from missions.&#8221; Guarionex&#8217;s unit just got a weight set, but before that soldiers made their own with sandbags.

&#182;Practice your faith: Lt. Gen. Ricardo Sanchez, commander of coalition ground forces in Iraq, said laying his burdens before God is the key to keeping his own morale up. Faith is &#8220;the source of my strength in this environment. I reach back into it multiple times every day,&#8221; he said.

&#182;Write it down: Army psychologist Capt. Mark Houck, who helps treat combat stress for the 4th Infantry Division, said writing is a great way to purge stress and help clarify issues. &#8220;I&#8217;m a big fan of journaling,&#8221; he said.

&#182;Count your money: Spc. Jason Ingle, a paratrooper with the 173rd Airborne Brigade, said money in the bank helps keep him motivated, and whenever he has the opportunity he checks his bank account. &#8220;That&#8217;s my biggest motivation. I just keep looking at all that money stack up.&#8221; By the time he leaves, he expects to have saved at least $20,000.

&#182;Build something: It fills time, challenges an idle mind and can make life a little bit better. In March, the 6th Battalion, 101st Aviation Regiment of the 101st Airborne Division moved into a gutted, squalid maintenance building at Qayyarah West airfield in northern Iraq. The team of Black Hawk pilots, crew chiefs and mechanics renovated their quarters from scratch. Tired of squatting over slit trenches, Chief Warrant Officer 3 Kevin Powell scavenged for wood and built a first-class &#8220;blue canoe,&#8221; complete with a padded toilet seat and magazine rack.

&#182;Take Action: If you believe something is unjust or substandard, you can go to your chain of command first. Then, there&#8217;s your inspector general. Some have written to congressmen or the newspaper. Spc. Tim Predmore got national attention by writing a letter accusing top leaders of &#8220;half truths and bold lies.&#8221; He says there was nothing in his contract &#8220;that said I had to give up my freedom of speech.&#8221; But be careful how far you go &#8212; there are rules about what you can say about top leaders, and some soldiers have been punished for insubordination.