Troops in Iraq fill their days with hunt for insurgents 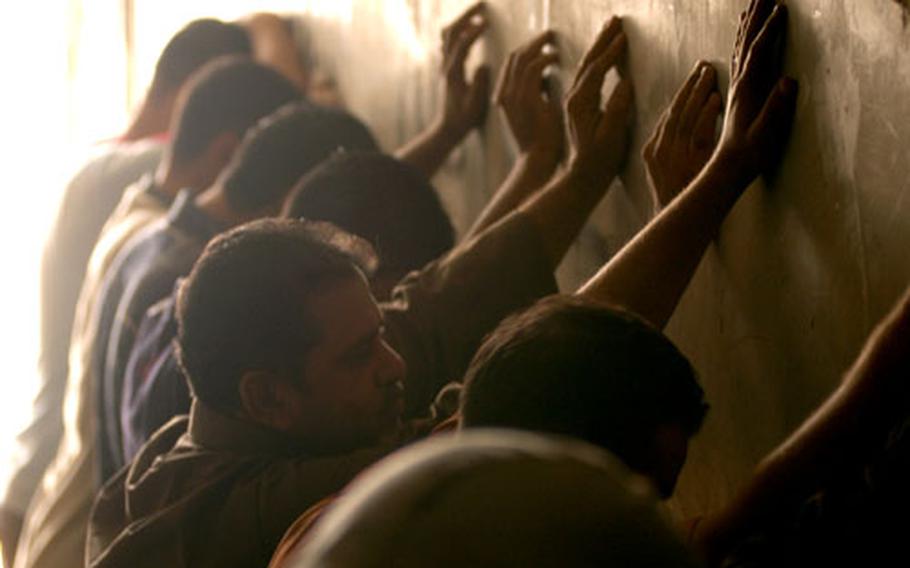 Suspects at an apartment building in Ahdamiyah line up against a wall while U.S. soldiers check the identity cards following a daytime raid in which troops found numerous AK-47 clips hidden in a ventilation shaft. (Ben Murray / S&S) In an upstairs room of a compound in northern Ahdamiyah converted into a machine-gun position and ammunition storage place, a belt of 7.62-mm machine-gun rounds hangs on a wall as a U.S. soldier and interpreter take stock of a weapons cache. In all, soldiers found thousands of rounds of ammunition, many of them deadly armor-piercing rounds — plus eight AK-47s, two PKC machine guns, 25 sets of body armor and rifle-fired flares. (Ben Murray / S&S) 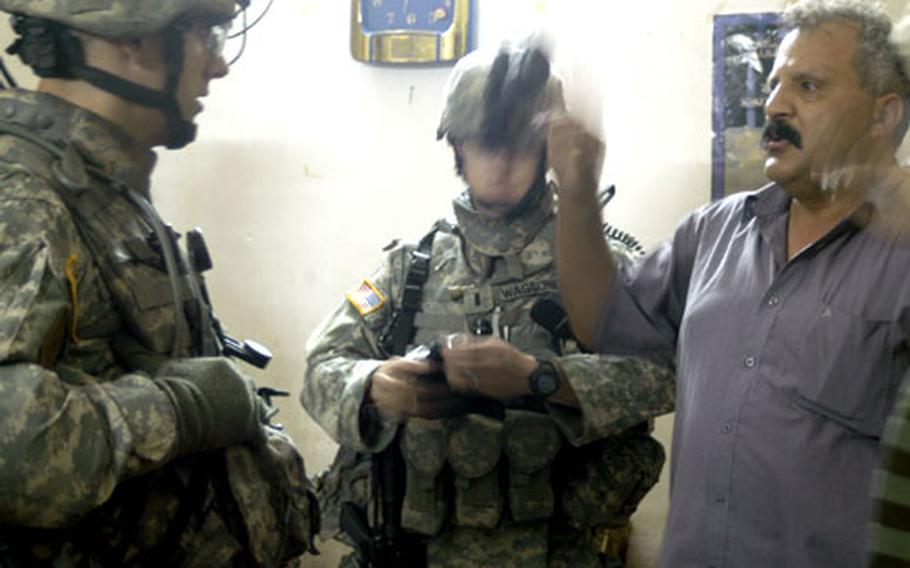 Capt. Michael Baka, left, talks with an Iraqi man after U.S. soldiers raided his house looking for weapons. The tip that led Baka&#39;s unit, Company C, 1st Battalion, 26th Infantry Regiment, to the house turned out to be bad, and no illegal weapons were found in the home. (Ben Murray / S&S) 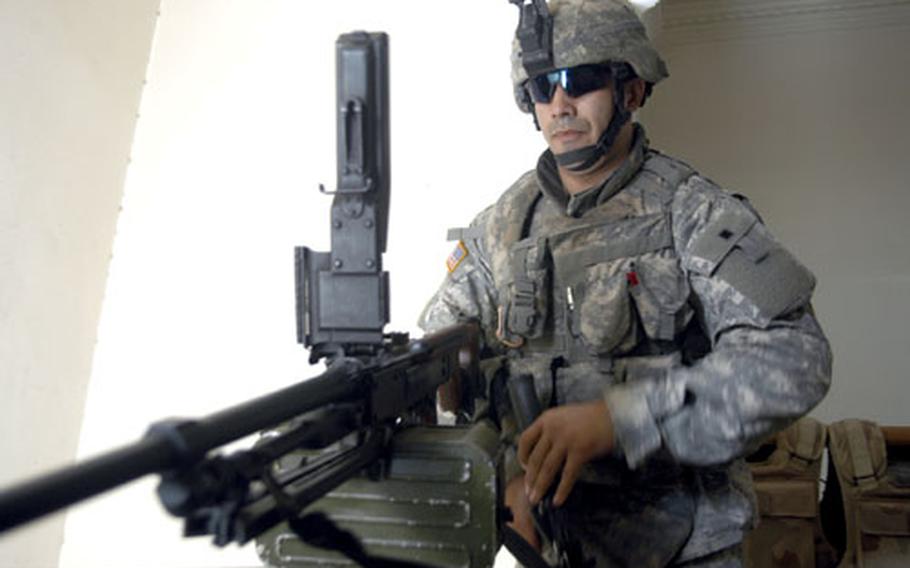 BAGHDAD &#8212; It was about 1:30 a.m. Wednesday when the column of Humvees and Bradley fighting vehicles rolled to a halt on an empty Baghdad street and sat rumbling in the dark.

On the corner was a large, two-story house &#8212; the target house &#8212; whose inhabitants had no idea a platoon of American soldiers had just stacked up outside their front door and were whispering about whether to use a shotgun to open it.

The soldiers had come to seize a weapons cache that they were told was part of the owner&#8217;s arms dealing business, an operation that constitutes regular fare in the U.S. military&#8217;s effort to reduce crime and violence in the restive Sunni neighborhood of Adhamiyah.

But before the door had to be blasted open, a man came to unlock it, allowing soldiers to do what they do best in Baghdad &#8212; clear a building, quickly and aggressively. But it was to no avail. The only weapon in the house was the owner&#8217;s requisite AK-47, found in nearly every household in the city and kept by an innocent engineer.

&#8220;We got some bad information,&#8221; Capt. Michael Baka, commander of Company C, 1st Battalion, 26th Infantry Regiment from Schweinfurt, Germany, told the man apologetically after soldiers had picked through his home.

The search for insurgents in this violent portion of Baghdad is often of a similar ilk, and constitutes a major portion of the day-to-day work for troops operating out of Patrol Base Apache, a tiny compound of Americans in the heart of the city.

Soldiers, eager to track down militia members, death squad leaders and all-around criminals are terminally engaged in a complicated business of trying to root out insurgents with strings of shady intelligence, semi-reliable tips and their own hunches.

Sometimes they yield tangible, satisfying results, and other times there is nothing to show for it except fragments of evidence that won&#8217;t likely lead to convictions.

To perform that duty, soldiers patrol the streets day and night, crawling through the neighborhood in Humvees, looking for anything suspicious.

At times, there are small rewards. On Tuesday, members of a reconnaissance platoon acted on a tip about another weapons cache and turned up a stock of AK-47 ammunition hidden in a ventilation shaft on the roof of an apartment building.

Other days, soldiers can come across major finds in their daily patrols, though even those are never certain to become the major bust soldiers here yearn to accomplish.

On Wednesday, for example, members of 1st Lt. Matthew Waite&#8217;s Scout Platoon from the 1-26th were talking to the owner of a well-kept home about the neighborhood when gunshots rang out nearby, possibly from the neighbor&#8217;s house.

Waite&#8217;s men moved to investigate, and entered a large, walled compound down the street, where they found a massive trove of automatic weapons inside the home, plus body armor, ammunition and a group of eight men, whom the soldiers quickly detained.

Many of the bullets seized were armor-piercing rounds, regarded with disdain by soldiers for their ability to puncture their protective plates.

But like many things in Iraq, nothing about the situation was unambiguous. The men claimed to be a private security team for the owner of the house &#8212; none other than former Iraqi Prime Minister Hussam Abed Al-Azawi &#8212; and said they had clearance from the U.S. military to keep the weapons.

Even with a massive pile of guns then, some of them clearly illegal, Waite could only shake his head in doubt about whether the day&#8217;s effort would take either the men or the guns off the street.

The next day was just as turbulent. On Thursday, Waite&#8217;s men were giving out toys to kids in their sector when they spotted a suspicious vehicle and pulled it over. The two men inside led Waite to the home of a man who had been kidnapped earlier in the day, but the family refused help from the U.S. soldiers lest the involvement of authorities get the man killed.

They had been told to wait for a call with instructions on how to deliver ransom, they said, and even the chance arrival of U.S. soldiers could doom the victim.

In the meantime, the true identity of the men who brought the soldiers there and their motivation for going to the house were also called into question. Family members knew them, but said they were friends, not actual relations, as the two had purported.

Waite and his men were brooding over their suspicion of the pair when a sniper&#8217;s bullet whistled down the street within a few feet of some of the soldiers, and men ducked for cover.

It all seemed too coincidental, too connected. There were bad deeds afoot all around the soldiers, that much was clear, but there was nothing they could hold on to, no one to shoot back at. No sniper, no clear enemy, no direct evidence to link anything together. So goes the fight against insurgents in Baghdad.