Troops in Germany make the drive for Hooters’ opening night 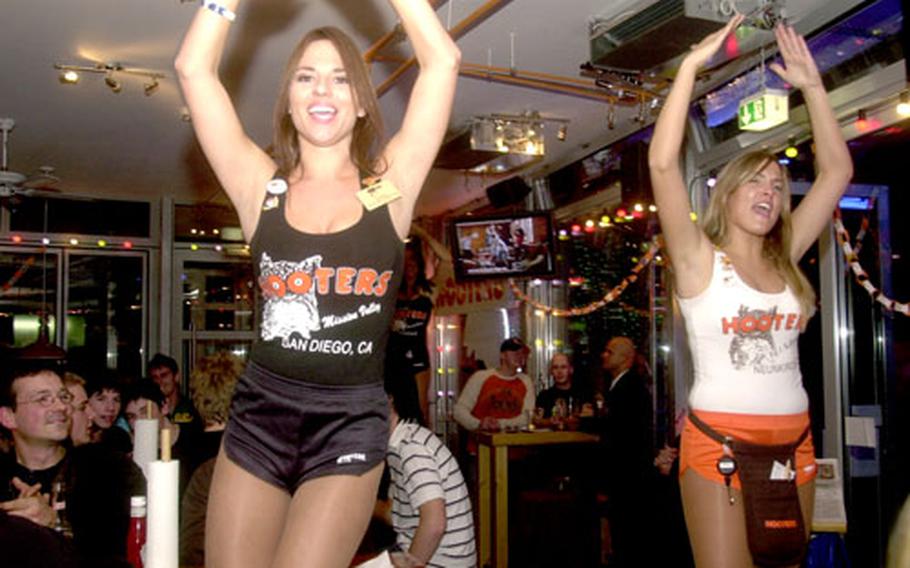 A German Hooters girl delivers a plate of chicken wings Friday night at the grand opening of the Hooters in Neunkirchen, Germany. (Steve Mraz / S&S)

NEUNKIRCHEN, Germany &#8212; Saying you go to Hooters for the food is like saying you buy Playboy magazine for the articles.

On Friday night, the lame excuse that is spun to wives and girlfriends may actually have been sincere as hordes of Americans feasted on &#8212; for the first time in Germany &#8212; Hooter&#8217;s famous deep-fried chicken wings with buffalo sauce.

But what about the Hooters waitresses known for their low-cut tank tops and tiny orange shorts? Did they have anything to do with getting the men to make the drive?

Dozens of American servicemembers attended Friday night&#8217;s grand opening party for the Hooters in Neunkirchen, which is about a 30-minute drive from the more than 50,000 Americans living in the Kaiserslautern Military Community.

The Neunkirchen restaurant easily could have been mistaken for a stateside Hooters on Friday night, even though numerous Germans were there.

Men in baseball caps swilled Budweiser, gnawed every last bit of meat off chicken wings and licked sauce off their fingers.

A squad of Hooters waitresses from the United States was on hand for Friday&#8217;s opening. The stateside Hooters girls are at the restaurant for two weeks to help train the German women on the finer points of being Hooters girls.

Devon Doncits, 20, on loan from the Winston-Salem, N.C., Hooters, said the American girls have stressed the importance of service and not being shy around customers.

Air Force Senior Airman Doug Collins and Staff Sgt. Edward Mann, both stationed at Ramstein Air Base, snagged a table by 4 p.m. Friday and had eaten wings, burgers and cheese steaks by 7 p.m.

Mann said the stateside wings are better, and the long drive could prevent U.S. servicemembers from visiting Hooters.

Mann insisted he was there to watch sports.

Then the men rounded up several of the hottest American Hooters girls to pose for pictures. After smiling for the camera with the women, Mann was asked if he still came to Hooters to watch sports.