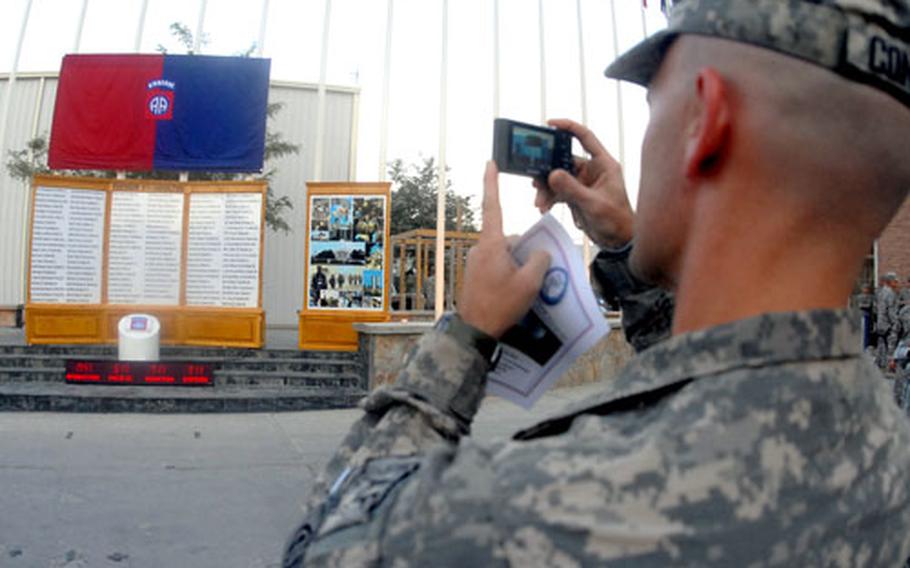 BAGRAM AIR BASE, Afghanistan &#8212; Air Force Tech Sgt. Shawn Merchant said he wouldn&#8217;t use words to try to overturn the waning U.S. public support of the war in Afghanistan. He&#8217;d use photos.

&#8220;It does upset me that polls show there&#8217;s less support for the war. It seems like the people have forgotten; forgotten what happened on 9/11,&#8221; said the 33-year-old crew chief from 335th Aircraft Maintenance Unit, out of Seymour Johnson Air Force Base, N.C.

Merchant and other military members commemorated the Sept. 11, 2001, terror attacks in New York, Washington and Pennsylvania on Friday, remembering the more than 3,000 killed that day and the troops who have died in Afghanistan and Iraq.

Public support for the war in Afghanistan is on the wane and death tolls are mounting. Insurgents have killed more American troops this year than in any other since the beginning of the conflict. August was the deadliest month for U.S. troops so far, with 51 killed.

In August, an ABC News-Washington Post poll found that 51 percent said the war was not worth fighting, while 47 percent said it was worth it.

Approximately 68,000 U.S. troops will be in Afghanistan by year&#8217;s end, under plans to boost troop levels announced earlier this year by President Barack Obama. Proposals for further troop increases are being met with congressional resistance, The Associated Press reported.

For about 1,600 troops serving in country, Friday started with a 9.11-kilometer run at Bagram, north of Kabul, and at Forward Operating Base Mehtar Lam in northern Laghman Province and Combat Outpost Najil in Afghanistan&#8217;s Ali Shang Valley. Later in the day, troops at Bagram attended a memorial service at the base.

&#8220;9/11 unfortunately is a historical date for us now,&#8221; said Maj. John Holmes, executive officer of the Kentucky National Guard Agribusiness Development Team, who completed the morning run at Bagram.

The declining U.S. public support of the conflict troubles some soldiers who say they are working to make life better for Afghans. But why should Americans care about whether Afghans have clean drinking water, electricity or schools?