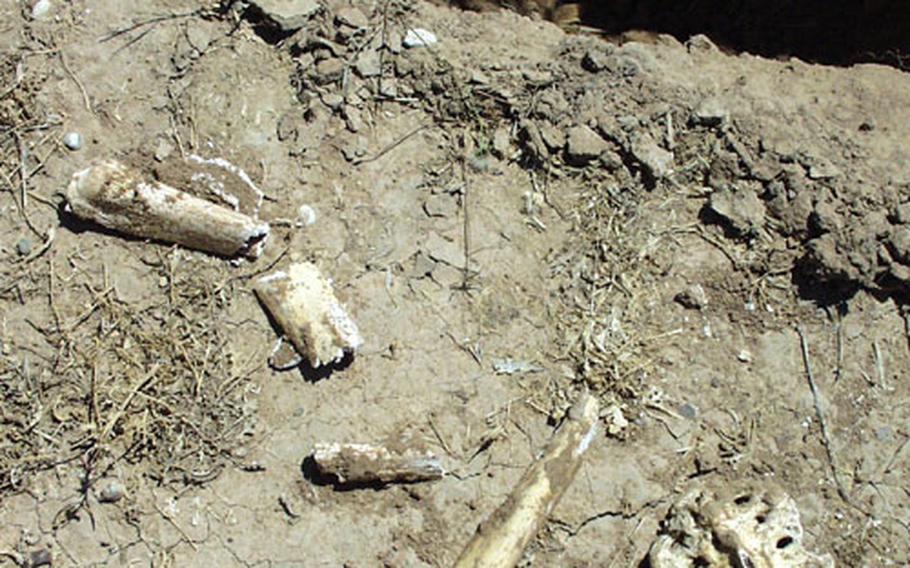 Soldiers unearthed parts of a vertebra and hundreds of other human remains Friday at a mass grave near Kirkuk, Iraq. (Marni McEntee / S&S)

Soldiers unearthed parts of a vertebra and hundreds of other human remains Friday at a mass grave near Kirkuk, Iraq. (Marni McEntee / S&S) 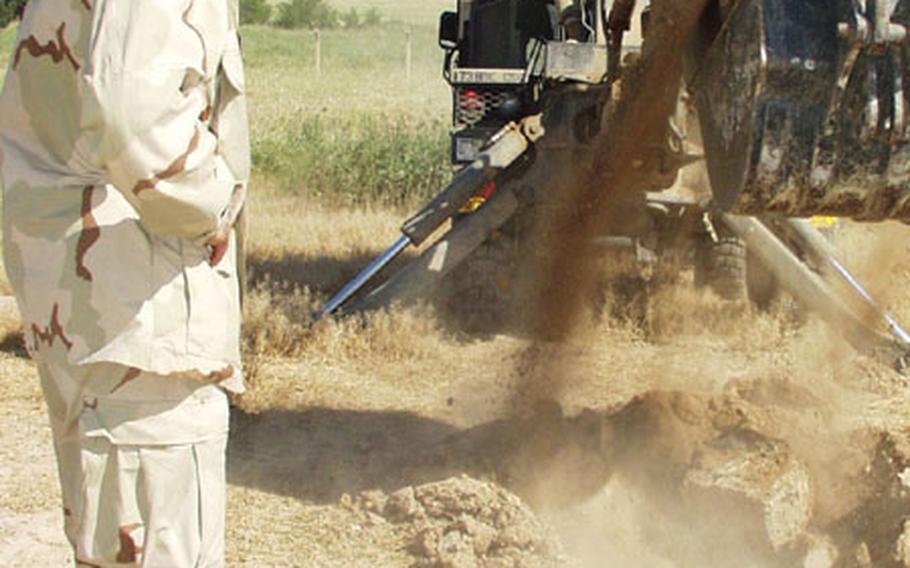 Staff Sgt. Christopher Ellis of the 173rd Airborne Brigade waits to inspect a trench on the grounds of a palace near Kirkuk, Iraq, to see if it contained human remains. (Marni McEntee / S&S) 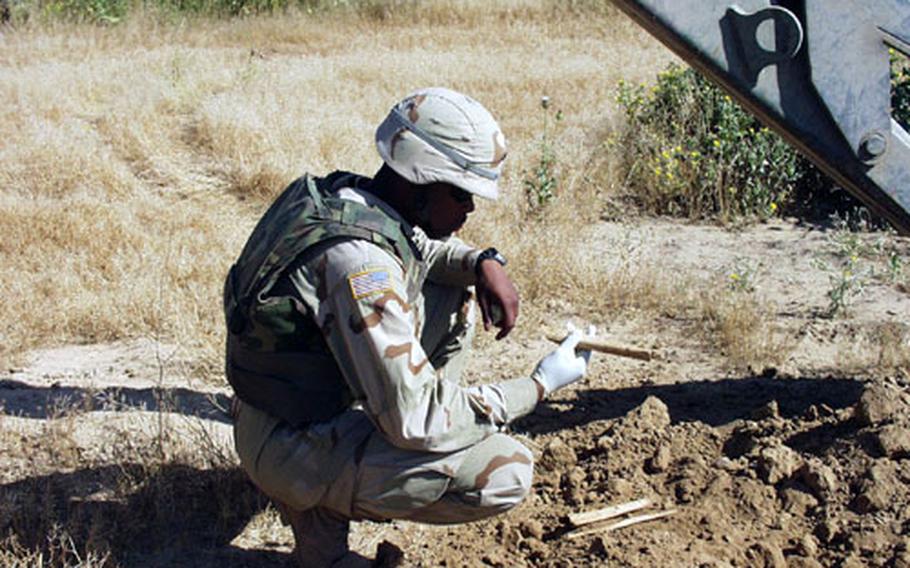 KIRKUK, Iraq &#8212; A team of Europe-based soldiers left their safe house in Kirkuk on Friday to investigate a suspected chemical weapons site at an abandoned palace just outside town. Instead, the troops made a much more gruesome discovery.

Hundreds of human remains, including a child&#8217;s skull, were found buried in a weed-covered mound south of the palace that was once owned by one of Saddam Hussein&#8217;s most notorious aides.

&#8220;We were looking for some kind of bunker when we found the skeletons,&#8221; said Capt. Adam Cubbage, chemical officer for the Vicenza, Italy-based 173rd Airborne Brigade. The unit was sent, initially, to find out if weapons of mass destruction had been stored or hidden on the property.

The Army will determine whether the site was a proper burial ground, but the position of the bodies made that unlikely.

Using a backhoe, soldiers had dug four trenches to take soil samples for chemical-weapons tests. They found the bones, which likely had been buried for a decade or more, stacked atop each other at every excavation site.

The sight was obviously disturbing to some of the soldiers.

Sure enough, as the backhoe dumped its third scoop of desiccated earth from a new trench, human leg bones fell onto the pile of dirt.

&#8220;There it is,&#8221; said Sgt. Terrance Dailey, a mortuary affairs specialist from the 201st Forward Support Battalion, based in Vilseck, Germany.

The exact origin of the bodies is unknown, but a Kurdish security policeman guarding the palace told U.S. Army officers that Saddam&#8217;s henchmen had massacred hundreds of thousands of Kurds in the area in 1988. Thousands were buried on the grounds of this once-grand palace, said Jeter Asatt, the Kurdish security chief.

Cubbage said the palace had been off-limits to U.N. weapons inspectors after the Gulf War.

Kirkuk, an impoverished city of 750,000 people, is believed to have been a crossroads for all kinds of weapons and military supplies in the region, Cubbage said. U.S. troops have taken over a former Iraqi air base in Kirkuk, which is expected to become a key airlift and air-defense hub in northern Iraq. The 173rd Airborne Brigade has seven companies living in &#8220;safe houses&#8221; they seized for use around the city.

Capt. Richard Murphy, commander of the Vilseck-based B Company, 2nd Battalion, 2nd Infantry Regiment, which patrols the southwest sector of Kirkuk, said the Army would send teams to further study the graves.

Mortuary affairs and military intelligence members likely will take samples of the remains for testing. The Army must ensure that none of the remains are those of Americans, Dailey said.

It was unclear Friday what ultimately would happen with the mass graves.