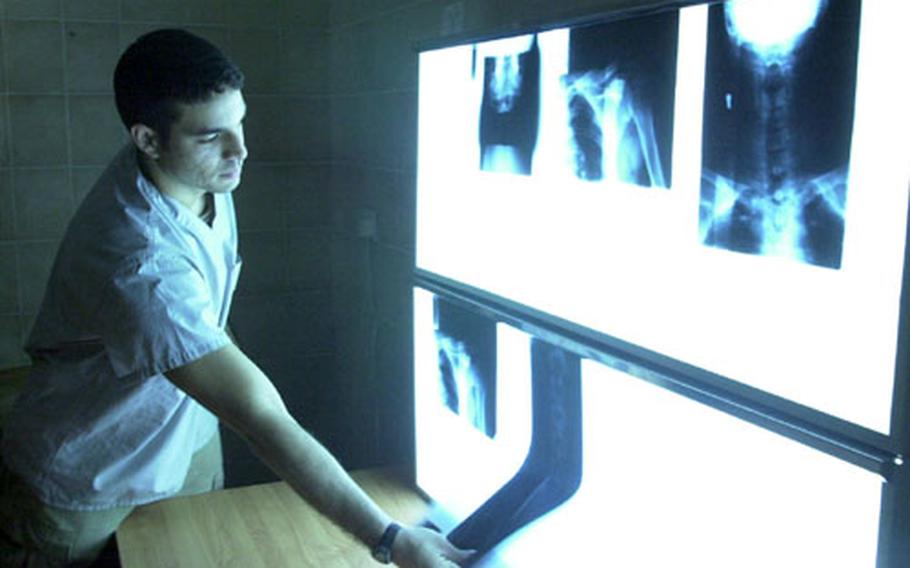 BAGHDAD, Iraq &#8212; In Iraq&#8217;s harsh environment, even soldiers safe inside their base camp face dangers.

Between combat casualties and accident victims in Iraq, medical personnel are also busy fighting microscopic enemies that can lay a troop near as low as a gunshot wound.

With ailments ranging from &#8220;Saddam&#8217;s revenge&#8221; stomach bugs to infections caused by bad hygiene, hundreds of soldiers are lining up at sick call instead of patrolling front lines.

Some maladies are caused by a witch&#8217;s brew of dust, heat, exotic bacteria and vermin. Others stem from poor sanitation and close living quarters, said Capt. Jolene Lea, a community health nurse at the 28th Combat Support Hospital in Baghdad.

Still others are related to the stress of seeing a friend killed in battle or hearing bad news from home, Lea said. Those can manifest themselves into mental health problems and, sometimes, suicide.

The most serious illness and injury cases are evacuated from Iraq to Landstuhl Regional Medical Center in Germany. As of last week, Landstuhl doctors have treated 7,381 from Operation Iraqi Freedom, hospital spokeswoman Marie Shaw said. Only 10 percent of those casualties were from battle injuries, she said.

The problems have some troops at bases from Basra in the south to Mosul in the north afraid that living and working in Iraq may be bad for their health.

&#8220;I am very worried about the long-term health effects of this environment,&#8221; Sgt. Brian Rau of the 372nd Military Police Co., in Hillah, wrote on a Stars and Stripes survey form. Stripes reporters surveyed nearly 2,000 troops throughout the country in August.

&#8220;The food is bad and not reliable, so we eat on the local market every day,&#8221; Rau wrote. &#8220;There is standing sewage outside our building. And the cans we use for toilets are prefilled with diesel fuel so we sit on top of those fumes daily.&#8221;

Cpl. Joshua Enos, a UH-60 Black Hawk crew chief who lived at an old Iraqi fighter base west of Qayaira, worried about the effects of a massive fire that broke out in a nearby sulfur plant shortly after the 101st Airborne Division took over the base in April. The fire spewed noxious black smoke into the air for days.

Before deploying to the Middle East, most troops were briefed on the types of health issues they would face, Lea said.

Some conditions, such as an outbreak of pneumonia, were unexpected.

In all, 98 troops from Iraq were diagnosed with pneumonia and 19 became so ill they had to be placed on a ventilator and evacuated, said Virginia Stephanakis, a spokeswoman for the Army Surgeon General&#8217;s Office. Two soldiers died.

Lea and other medical personnel from troop clinics to battalion aid stations, however, say the incidence of serious illness or injury in Iraq is proportionate to the population size.

Some of the more common health problems ...

Here is a sampling of the more common health problems in Iraq treated by military doctors at the 28th Combat Support Hospital:

&#182; Eye injuries: Dust and windblown debris are the main culprits of eye abrasions. Doctors also have treated troops who have viral conjunctivitis.

&#182; Gastrointestinal problems: Caused by tainted food or water. In June, doctors treated a number of cases of Norwalk virus, a contagious stomach flu caused by ingesting food or water contaminated with fecal matter.

&#182; Heat injuries: Caused by dehydration, electrolyte abnormalities, and low sodium and potassium levels. At least one soldier in Iraq has died from heatstroke.

&#182; Kidney stones: Caused by the inability to metabolize certain minerals in the bloodstream. Doctors at Landstuhl Regional Medical Center in Germany said cases may be caused by soldiers not drinking enough water or by drinking water with high-mineral content.

&#182; Gynecology: Poor hygiene, stress and other factors can cause female soldiers&#8217; menstrual cycles to stop or can cause infections. Several females also have been treated for breast masses.

&#182; Urology: Testicular masses and epiditimitis, or an infection of the entrance to the urethra, caused by poor hygiene such as not changing underwear or showering regularly.

&#182; Swollen lymph nodes: Sometimes caused by an infected insect bite or other infections.

&#182; Leishmaniasis: Caused by bite from a parasite-infected sand fly. Serious cases need to be treated by a long course of antibiotics. Walter Reed Army Medical Center in Washington, D.C., has treated 22 cases and the Armed Services Blood Program Office has deferred troops returning from Iraq from donating blood for one year because of the problem.

&#182; Respiratory illnesses: Dust, cigarette smoking and pollution have contributed to an increase in asthma and bronchitis. At least 98 soldiers have been diagnosed with pneumonia and two soldiers died from the condition.

&#182; Tuberculosis exposure: The illness is most common among enemy prisoners of war, but some soldiers have been exposed. Soldiers are routinely tested for TB exposure following deployments.

&#182; Psychiatric problems: Ranging from "adjustment disorder," or trouble adjusting to a new environment, to more serious mental health issues that lead to suicide. The Army is investigating 11 incidents of possible suicides and several other deaths.