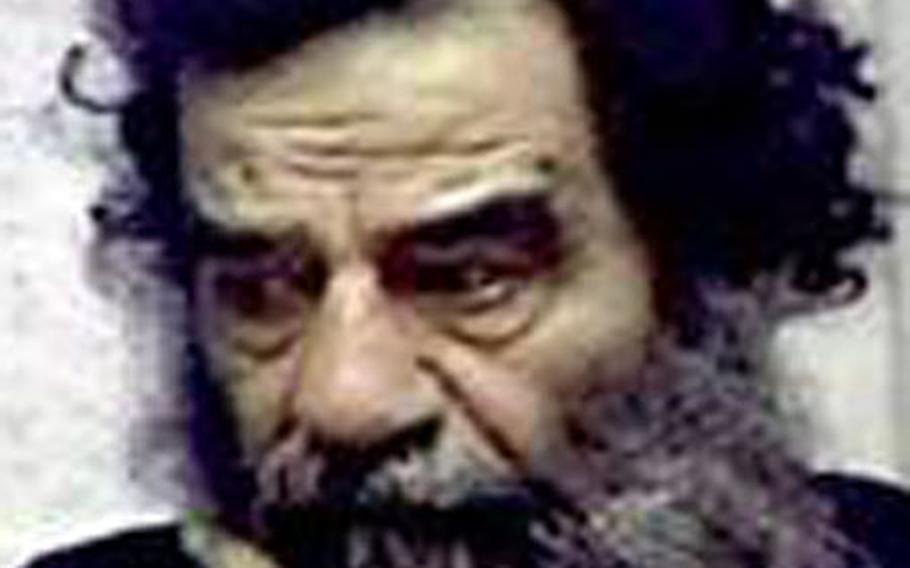 Saddam Hussein, possibly trying to remember the phone number of a good lawyer. (U.S. military photos via The Associated Press)

BAGHDAD, Iraq &#8212; Troops in a combat unit that carried out frequent raids like the one that bagged Saddam Hussein welcomed news of his capture, but saw tough work still ahead for coalition forces.

Rosario&#8217;s battalion has been in the vanguard of efforts to keep pressure on Saddam loyalists who have conducted guerilla attacks in Baghdad. Three of its troops were killed in action and others have been wounded.

Besides running patrols and manning checkpoints, the battalion has mounted a series of house-to-house searches seeking illegal weapons, quick-reaction forays to chase down insurgents, and sudden raids in search of insurgent suspects.

Spc. William Ashbaugh, 31, of Elyira, Ohio, is a Humvee commander with the battalion&#8217;s scout platoon. He said he had a feeling of excitement when he heard Saddam was captured, but the &#8220;rush of it&#8221; was quickly gone.

&#8220;Our mission basically stays the same. That was just part of our mission. We still have a lot of cleanup work ... with Saddam captured, still a lot of people to catch. So really, because we take down the figurehead doesn&#8217;t mean the end of our mission.&#8221;

For another soldier in the unit, the news was first heralded by the sound of Iraqis firing guns in celebration Sunday afternoon.

&#8220;About two minutes later it comes over the net, there&#8217;s a possibility that Saddam was captured &#8230; and then the lieutenant said it was official.

Campbell said he wasn&#8217;t sure what impact the capture would have on the insurgents, but said he hopes some of their activity will die down.

&#8220;When it was confirmed, I was happy that the military accomplished one of its goals,&#8221; said Sgt. 1st Class Michael Livingston, 33, of San Antonio, platoon sergeant with Scout Platoon.

There was more levity at the Baghdad International Airport, where about 150 soldiers watched a television broadcast announcing the capture. The images of a haggard Saddam brought whoops of laughter from soldiers, who were waiting for flights departing Iraq.

Soldiers provided a running commentary on the news conference. When a reporter asked whether Saddam would be turned over to Iraqis for trial, soldiers at the airport yelled, &#8220;Hell, no!&#8221;

Several said they hoped that the news would mean an end to attacks against their fellow soldiers.

Sgt. Antonio Lester, 27, a Howitzer crew member from Atlanta, said that while he was ready to board a plane home, &#8220;I sort of wish I was staying around to see how the people react.&#8221;

Several said they were afraid the capture would prompt more violence by Hussein loyalists.

Despite the jokes, most of the soldiers watching the news were reserved and just stayed glued to the TV.