Troops get immunizations in preparation for MEDFLAG exercise in Africa 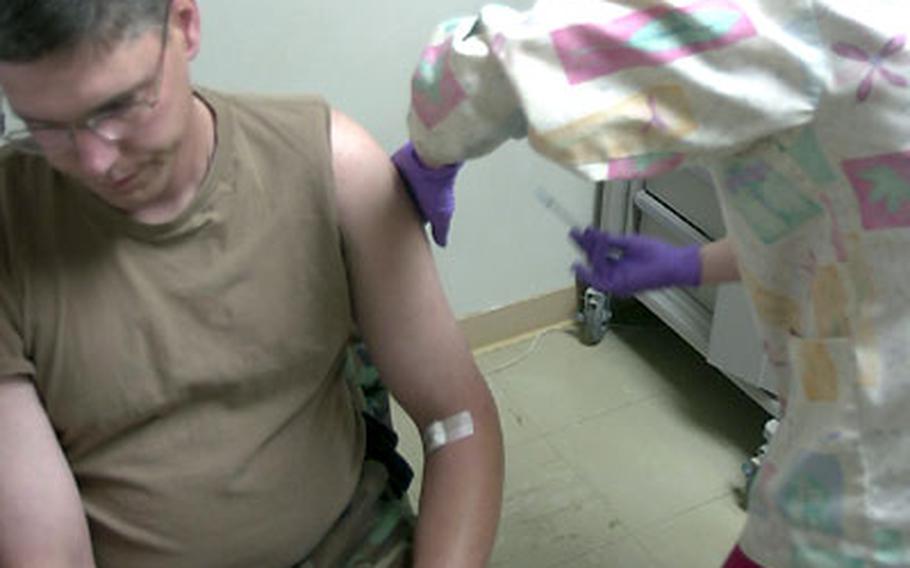 KAISERSLAUTERN, Germany &#8212; Dozens of soldiers were lined up Monday and shot.

But instead of bullets, soldiers preparing to participate in MEDFLAG 05 were stuck with syringes containing immunizations against yellow fever and other sinister maladies.

A joint task force of 212 troops from the Army and Air Force, led by the 212th Mobile Army Surgical Hospital, will begin deploying to the southwest African nation of Angola for MEDFLAG 05 later this month. Since the 1980s, U.S. European Command has organized military medical exercises in African nations under the MEDFLAG moniker.

At the heart of the deployment is a mass-casualty exercise with the Angolan military. Other missions include national disaster relief training with Angolan civilians and military; and humanitarian and medical assistance for Angolan citizens.

During the 30-day exercise, 212th MASH troops expect to perform between 80 and 100 surgeries and treat 1,500 patients, according to a mission fact sheet.

The troops, who will start deploying later this month, must have all the proper immunizations and medications against medical threats in Angola. The immunizations began Monday in Kaiserslautern at the Kleber Health Clinic, which is the deployment and reintegration medical hub in the Kaiserslautern military community. More shots and medical screenings will take place next week.

&#8220;The Kleber Health Clinic has a pretty big role in screening the medical records and making sure that we deploy with the right pharmaceutical products to ensure that we get protected from any medical threats that are down there and that we are up-to-date with our immunizations,&#8221; said Maj. Soo Lee Davis, 212th MASH executive officer.

With malaria, yellow fever, leishmaniasis, African sleeping sickness and the deadly Marburg hemorrhagic fever found in Angola, force protection for the troops is of the utmost importance. While an outbreak of Marburg occurred earlier this year in Angola, the area the troops will be in Angola does not have the lethal virus.

Since October 2004, the Kleber clinic has deployed or reintegrated about 1,300 soldiers, said Maj. Hugh McLean, commander of the Kleber Health Clinic.

&#8220;We take care of all their immunizations, their hearing, eyeglasses and anything that they medically need done,&#8221; he said. &#8220;All their prescriptions are given out here, and depending on where they&#8217;re going and for how long, we give them an amount sufficient enough to sustain them.&#8221;

In addition to medically preparing soldiers to deploy and reintegrating them, the clinic also inprocesses all soldiers in the KMC, provides troop medical care and conducts medical care for active-duty family members, retirees and Department of Defense civilians.