Troops get desert training on Copperheads 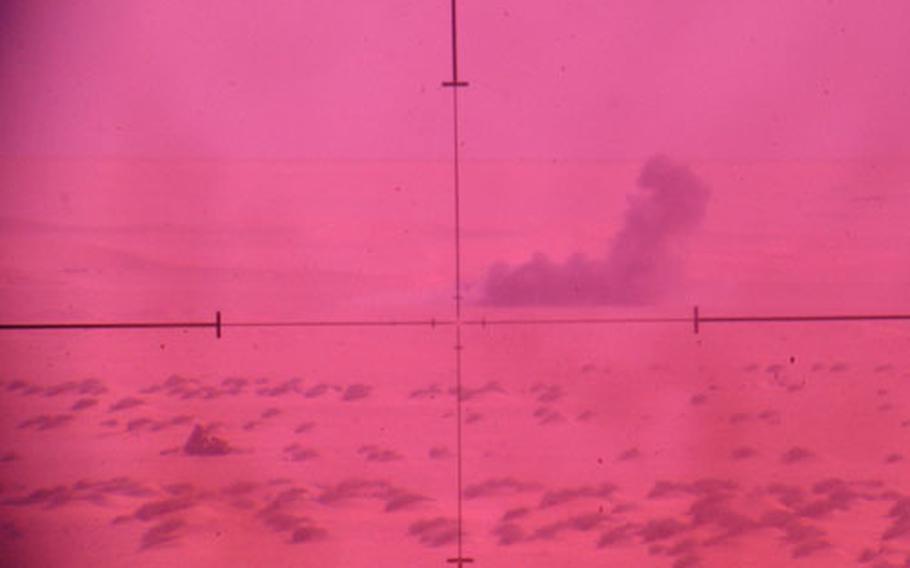 The view through a laser-designator: A derelict truck disappears in smoke after being hit by a Copperhead round at Udairi Range, Kuwait. (Seth Robson / S&S)

The view through a laser-designator: A derelict truck disappears in smoke after being hit by a Copperhead round at Udairi Range, Kuwait. (Seth Robson / S&S) 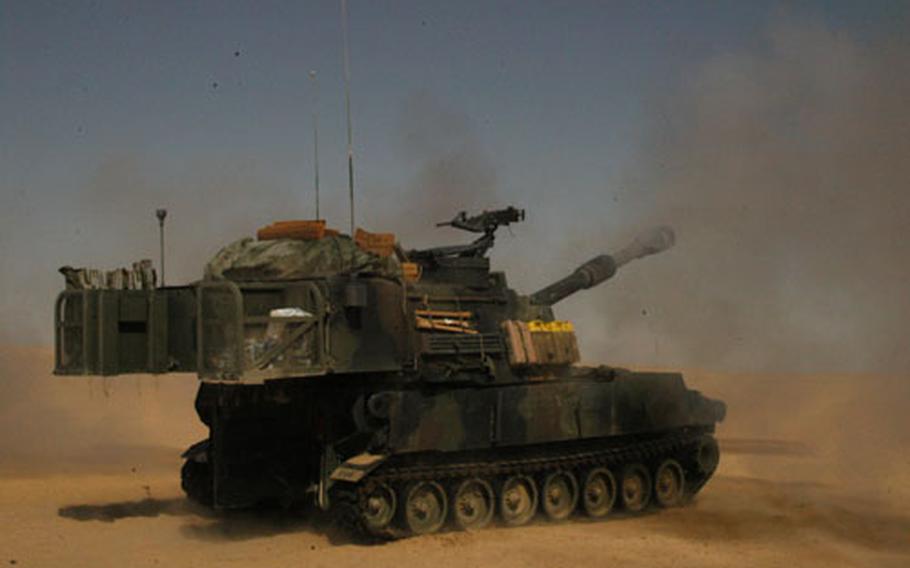 UDAIRI RANGE, Kuwait &#8212; If it is possible for one part of a desert to be more desertlike than another, then the artillery training area at Udairi Range is such a place.

During downtime, soldiers amused themselves with impersonations of &#8220;Star Wars&#8221; characters, such as the Tuscan Raiders, by putting on their goggles and wrapping their faces in scarves, shielding themselves from the fierce sandstorms that whip up from time to time.

But it wasn&#8217;t just the impersonations that gave the range a &#8220;Star Wars&#8221; feel on Thursday. It was also the 24 Copperhead laser-guided rounds that 2-17 soldiers fired from their Paladin Howitzers that lent an air of science fiction excitement to the desert.

For Sgt. Jonathan Humphries, the atmosphere was right on target.

Humphries, one of the 2-17 soldiers helping &#8220;paint&#8221; targets using a laser designator, is a big &#8220;Star Wars&#8221; fan. In South Korea, where 2-17 was based before the Middle East deployment, the young soldier spent his free time playing Star Wars Galaxies, an online game based on the film series, he said.

That&#8217;s not the only issue that restricts live-fire training with the Copperhead rounds. The Army doesn&#8217;t shoot Copperheads in South Korea because of safety concerns, he said.

South Korea is the only place in the world where U.S. artillery fires directly over people&#8217;s houses during training. That means it is too dangerous to fire Copperheads there, Fant said.

&#8220;Because this is a fin-stabilized munition, if the fins fail, the round will become unstable and tumble into some place you don&#8217;t want it to go. But when you are out here in the desert it is an ideal situation,&#8221; Fant said.

However, even in the desert shooting artillery can be dangerous for the locals. Udairi Range is home to nomadic Bedouin shepherds and camel herders who wander among the guns with their flocks, seemingly oblivious to the risk. And the targets &#8212; a group of wrecked vehicles &#8212; attracted people, apparently scavengers, which delayed the shooting.

But whatever the concerns about safety, the Copperhead is extremely accurate, Fant said.

&#8220;It gives the artillery a laser-guided precision munition to defeat hardened targets. Its primary purpose is to kill tanks and armor and other hardened targets,&#8221; he said.

The Copperhead is accurate to within a couple of feet, soldiers said.

Fant said it could decrease collateral damage &#8212; that is damage to private property and injuries to civilians &#8212; in certain situations in Iraq.

The information was relayed to the Paladins, which were spread out in the desert another mile away, and a Copperhead was fired. Moments later there was an explosion and smoke rose from the truck, which was split asunder by the blast, while the soldier who painted the target whooped with joy.

His crew unpacked the round from its box and carefully loaded it into the barrel, taking care not to damage the large, clear &#8220;eyeball&#8221; at the front that allowed it to lock onto the laser fired by the designator.

The Copperhead, just over a yard long, was at least twice as big as the other artillery rounds packed inside the Paladin.

A set of fins was visible at the tail of the round, set into its body so it would fit in the gun tube. There is also a series of dials that allow gunners to lock it onto a particular laser designator&#8217;s beam or cause it to explode before hitting its target.

When they received the command, Yakop and his crew fired the gun, filling their compartment with the smell of sulphur as the missile sped on its way.

Training in the desert brought back childhood memories for the young soldier, whose parents are Egyptian.

Shooting the Copperhead is a rare experience for a gunner, he said.

&#8220;There are probably a couple of times in your career that you get to shoot a Copperhead. You feel the adrenalin pumping hard when you see a bigger round coming out of the tube,&#8221; he said.