Troops get 1st ID vehicles from port to camp 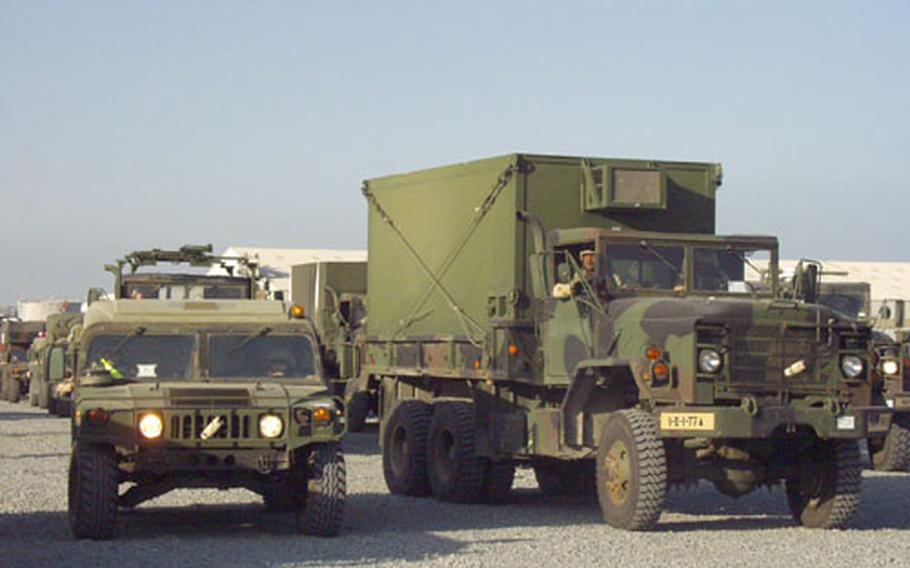 This Humvee and truck from the 1st Infantry Division&#39;s 1st Battalion, 77th Armor, began a convoy of vehicles from the port in Kuwait City to Camp New York. (Steve Liewer / S&S)

This Humvee and truck from the 1st Infantry Division&#39;s 1st Battalion, 77th Armor, began a convoy of vehicles from the port in Kuwait City to Camp New York. (Steve Liewer / S&S) 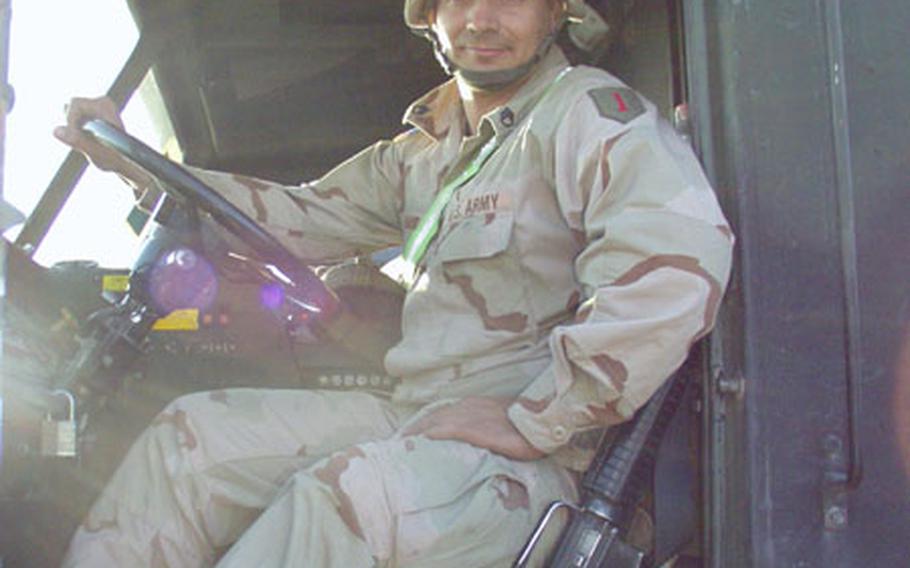 With the arrival of vehicles from the 1st Infantry Division&#39;s 2nd and 3rd brigades in Kuwait, Staff Sgt. Dahud Hanid, 33, of the Schweinfurt, Germany-based 1st Battalion, 7th Field Artillery is back at the wheel of his "Iron Horse" truck. Here, Hanid waits in his cab Wednesday in the marshaling yard at the Kuwait City port, where convoys of 1st ID vehicles form up for the four-hour journey to Camps New York and Udairi in the northwest Kuwaiti desert. (Steve Liewer / S&S) 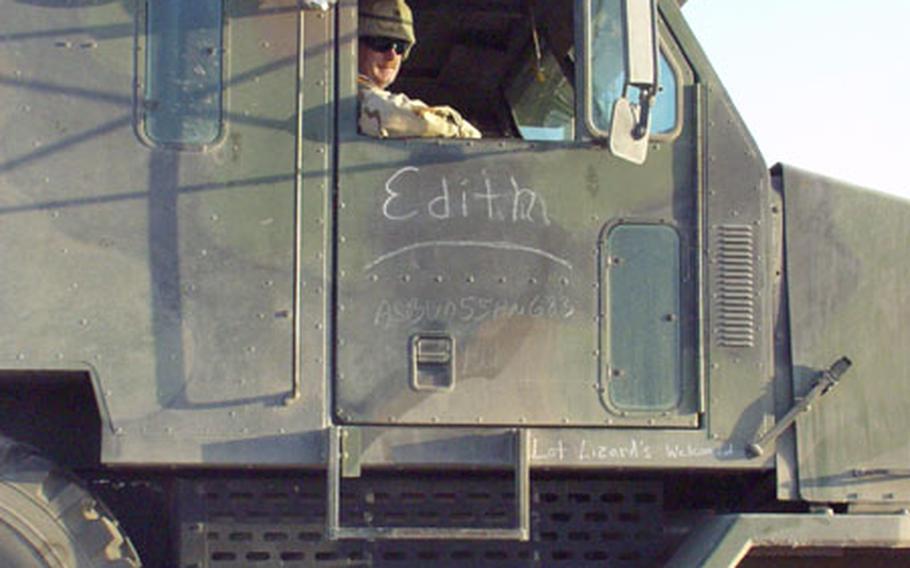 Many drivers give their trucks names or write messages on the doors. This one, from a 1st Infantry Division 2nd Brigade vehicle, says "Edith." (Steve Liewer / S&S) 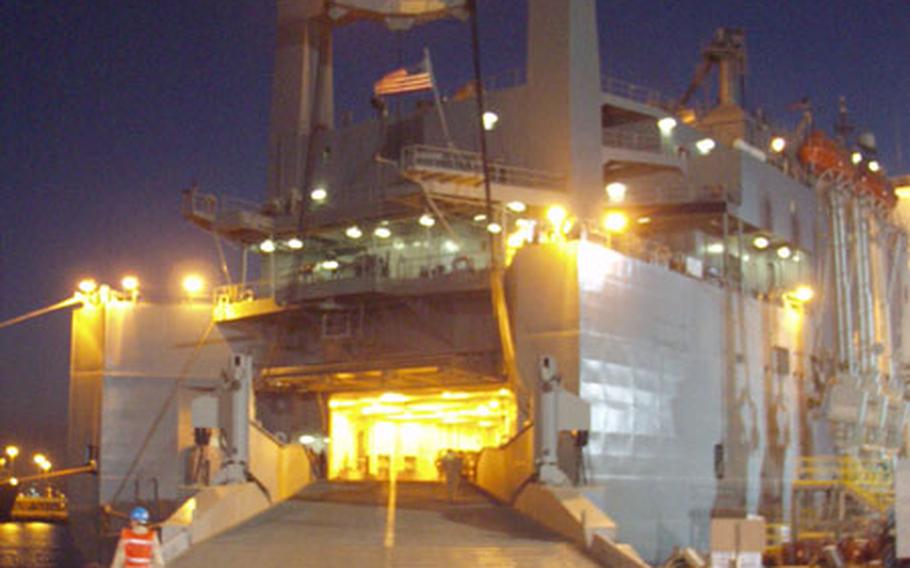 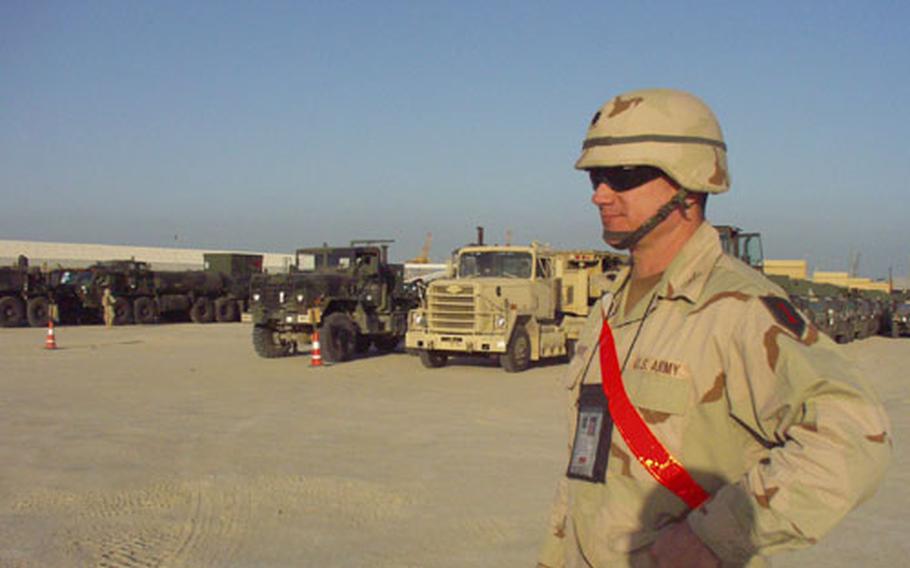 Lt. Col. Steve Bullimore, 43, of St. Joseph, Mo., is an artillery officer of the Bamberg, Germany-based 1st Battalion, 6th Field Artillery. Placed in charge of the off-loading of ships carrying 1st Infantry Division cargo and vehicles, he has learned quickly to manage the round-the-clock movement of convoys from the port in Kuwait City to Camps New York and Udairi. (Steve Liewer / S&S)

KUWAIT CITY &#8212; Early this week, the 950-foot Military Sealift Command ship USNS Watkins pulled up to a pier at Kuwait&#8217;s port, opened its massive jaws and spit out its cargo: 1,400 Army vehicles for the 1st Infantry Division&#8217;s 2nd Brigade.

Within a day and a half, all the vehicles would be driven to a marshaling yard a couple of miles away, inventoried, lined up in convoys, and then sent off on a four-hour crawl to Camp New York in the remote desert.

Although he had no background in logistics, the division put Bullimore, of St. Joseph, Mo., in charge of unloading all of the Big Red One&#8217;s cargo from the MSC ships. He brought along 24 of his own people from the 1-6 Field Artillery to help, plus 52 more to drive vehicles from the ship to the yard.

The operation began Feb. 16 and was scheduled to stretch about two weeks, Bullimore said. Tanks and tracked vehicles are driven aboard flatbed trailers at their blades reattached. Thousands of containers are hauled to a separate yard for loading aboard more trucks.

Staff Sgt. Dahud Hanid, 33, of the Schweinfurt, Germany-based 1st Battalion, 7th Field Artillery, sat in the cab of his huge M1079 cargo truck, which pulled a flatbed trailer for heavy gear. He said he liked being back with his own truck, which he calls &#8220;Iron Horse.&#8221;

The convoys left for Camp New York in groups of 20 to 100 vehicles. Some soldiers found themselves skipping a night&#8217;s sleep Monday or Tuesday as they waited for their vehicles or had to drive them back to camp.

Still, their work was far from finished. As the vehicles rolled into their makeshift parking lots in the desert, mechanics checked all of them. Soldiers lined the unarmored vehicles with sandbags to make them safer against the constant threat of roadside bombs planted by Iraqi insurgents.

Already officers were organizing the convoys that soon would take the division to its destinations in Iraq. Before that, all 12,000 of the unit&#8217;s deployed troops will take part in convoy live-fire drills, which involve rehearsing a simulated ambush on a convoy.

The drills are familiar to 1st ID soldiers but never have been more critical than on this mission. Most of the 545 U.S. soldiers killed in Iraq since last year have died in convoy ambushes.