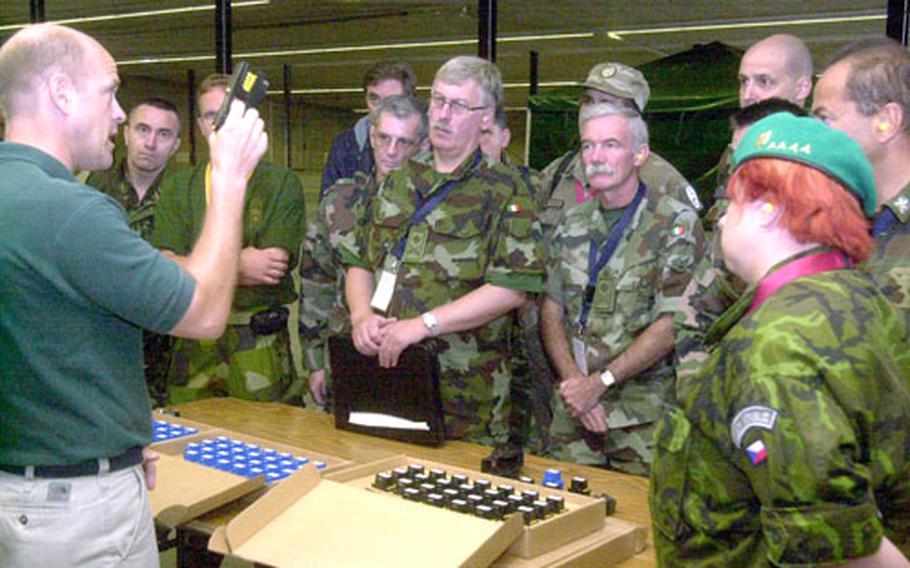 KAISERSLAUTERN, Germany &#8212; At the height of the Cold War, a Russian soldier firing weapons on a U.S. Army base in Germany would have meant World War III was well under way.

What a difference about 20 years make.

The tour and weapons demonstration were part of a two-day Vienna Document visit by 48 delegates from 29 countries, including the Russian Federation, Ukraine, Ireland and even Japan and Korea.

First signed in 1990, the Vienna Document is part of an international agreement with former East Bloc and other European countries. The document is a confidence- and security-building measure designed to promote mutual trust and dispel concern about military activities by encouraging openness and transparency, according to an executive summary of the document.

The latest version of the document was signed in 1999 and adopted by 55 members of the Organization for Security and Cooperation in Europe. Every five years, each member nation must host a visit to one of its military facilities.

&#8220;We decided to come to Kaiserslautern and show them some of our supply and other activities that focus on our deployment/redeployment process,&#8221; said Marlys Dewor, chief of the treaty compliance branch in U.S. Army Europe headquarters.

&#8220;With a lot of the countries we have here, they were old Russian East bloc countries,&#8221; she said. &#8220;Now they are part of our coalition forces. It gives us a chance to meet and talk. They get to meet our soldiers and see that the people they had been taught at one time were their enemy are not that way.&#8221;

The delegates were given the 21st Theater Support Command and U.S. Army, Europe command briefings on Tuesday. On Wednesday, they toured Rhine Ordnance Barracks, getting a chance to see the rigging facility, deployment processing center and a nonlethal weapons demonstration.

Swiss Army Lt. Col. Prasenjit Chaudhuri said the soldiers, the facility and the openness of the U.S. Army impressed him. Some of the other nations Chaudhuri has visited attempted to hide equipment or did not answer questions.

&#8220;We can talk and ask anything,&#8221; he said. &#8220;There are no restrictions in taking pictures. Not everywhere is that the same, as you can imagine. So, it meets the standard we desire or expect from a democracy or a democratic-controlled armed force.&#8221;