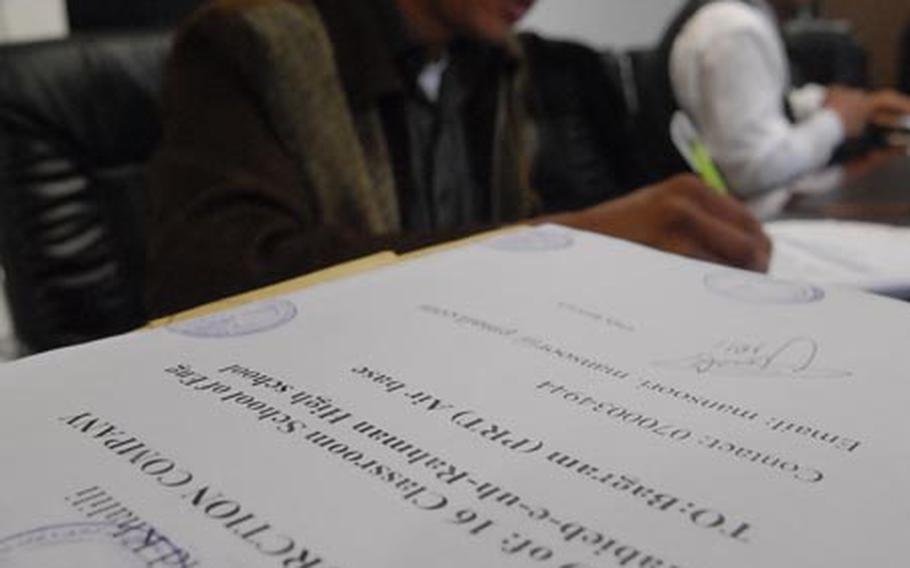 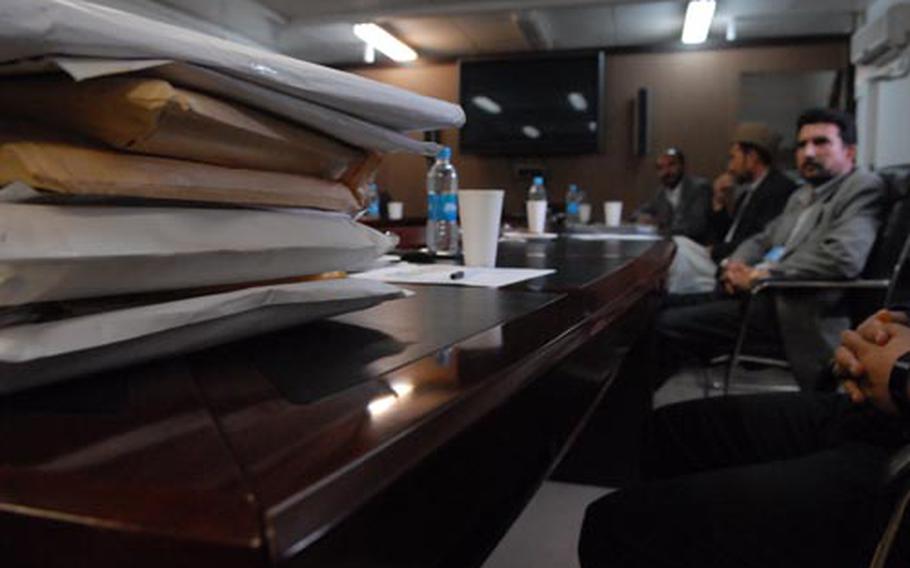 A stack of bid proposals awaits review before the start of a nomination review board meeting Tuesday in Bagram, Afghanistan. (James Warden / S&S)

BAGRAM, Afghanistan &#8212; One water well may not seem like much in the overall scheme of the Afghanistan war. It&#8217;s a small, cheap thing that pales in comparison to the massive American-funded highway projects snaking across the country.

The picture starts to look a little different when you have nearly four dozen wells, though. Villagers who might never have had personal experience with a paved road can easily appreciate the taste of fresh water many, many months before a road ever nears their door.

That&#8217;s the approach ground units in Parwan province are taking toward development. With higher-level development teams focused on large-scale ventures, squads and companies are concentrating on small, quickly completed projects that can win over wary villagers as soon as units move in to a contested village.

The battalion-level task force has initiated 136 projects &#8212; many of them so-called "quick impact projects," or QIPs &#8212; during its time in Afghanistan, said Maj. Luis Ortiz, Gladiator&#8217;s operations officer. It has completed 96 of those projects so far.

In all, the battalion has spent $57 million on development, and it plans to spend an additional $3 million before it leaves Afghanistan.

Lt. Col. Buck Dellinger, the task force commander, said the goal of these quick projects is to bring about security gains while longer-term projects are still getting up and running. Villagers in Taliban strongholds are often hesitant to cooperate with Americans when the soldiers first arrive. But giving them clear benefits that they can see right away makes them more likely to support the Americans.

"We want them to support us because it&#8217;s important to our security," he said. "These are the ways that we encourage favor from the locals in that village. When you come back 15 days later and there&#8217;s someone building a well, right away you&#8217;re gaining support."

The approach demands a fast tempo to ensure villages see quick results. The task force has a busy four-person civil affairs team to oversee development, but the quick projects allow it to make the most of its manpower by relying heavily on soldiers who are out among the people every day.

Leaders of squads and platoons are the ones who most frequently forward project requests up the chain of command. These same soldiers are often the ones who check up on the contractors as they&#8217;re completing the projects.

Task Force Gladiator is in the unique position of being responsible for both the Parwan&#8217;s security and its development. In most areas, the provincial reconstruction team handles development while the ground unit is responsible for security. But Task Force Warrior, which oversees Gladiator, turned over development responsibilities to Gladiator in order to give Warrior&#8217;s PRT more time to focus on less-stable Kapisa province.

Putting both security and development in the hands of a single unit has since made it easier to link the two together, Dellinger said. Afghans know that PRTs deliver projects, and that can put the ground units in an awkward position when they stop by to check on a village. "They know this guy&#8217;s security," Dellinger said. "He&#8217;s not going to bring anything but blowing up some building &#8212; something bad."

Gladiator units, on the other hand, can start off talking to the people about security, and finish with promises to build a well in the village, a route that conversations here invariably seem to follow.