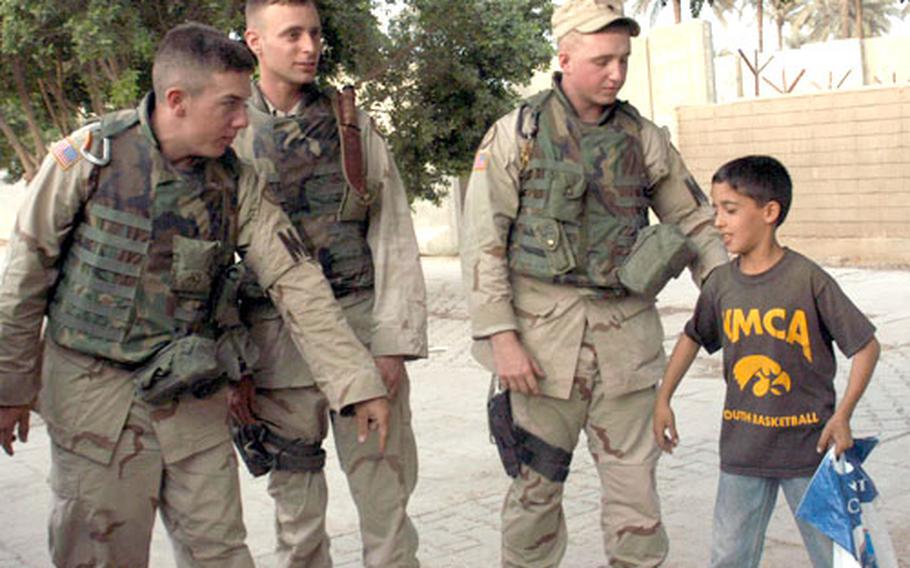 Pfc. Jimmie Frost, Spc. Daniel Buff and Spc. Gary Hiatt with the 89th Military Police Brigade in Baghdad encourage Ahmed, an Iraqi boy who visits with soldiers, to pose like a body builder. Many of the kids in the International Zone wear T-shirts given to them by troops. (Juliana Gittler / S&S)

BAGHDAD &#8212; They buy chewing gum from children outside the exchange in the International Zone or sneak food to others on patrols around Baghdad.

Charities, military commands and individuals have donated thousands of school supplies, shoes and provisions to help the children of Iraq, but ordinary soldiers and Marines are also finding comfort and humanity in their daily interaction with local children.

Across Iraq, servicemembers give out candy and water to let kids see a softer side to warriors.

&#8220;We&#8217;re out there every day working with the kids. Some even recognize us, and remember our name,&#8221; Marine Cpl. David. P. Meinhold, a reconnaissance Marine with the 11th Marine Expeditionary Unit in Najaf, said in an e-mail.

That interaction helps time pass, helps distinguish the good guys from the bad, and could help the future of Iraq, according to mental health professionals and the servicemembers themselves.

&#8220;I think it gives Marines and soldiers something meaningful to do other than fighting. For the most part, [They&#8217;re] only fighting a small percentage of their time here,&#8221; said Army Reserve Capt. Michael Brand, a clinical social worker with the 1908th Combat Stress Control Detachment. Brand is also an assistant professor at the University of Oklahoma Health Sciences Center, College of Public Health.

Servicemembers give a more simplistic reason for interacting with kids: to kill time.

Children coming by to sell things and hang around are the only entertainment for soldiers waiting by their vehicles in the International Zone between patrols.

Out on patrols, the interaction can serve a greater purpose.

&#8220;Sometimes, they&#8217;ll help us with stuff. A lot of them like to do things for you,&#8221; said Sgt. Nathan Melton, with the 2nd Battalion, 162nd Infantry Regiment with the Oregon National Guard serving in Baghdad.

&#8220;I think getting out and having [humanitarian assistance] interaction helps distinguish between average folks and the bad guys,&#8221; Brand said.

For servicemembers angry about some of their experiences here, interacting with children can dissipate the anger, he said.

Servicemembers say the children can get out of hand or mouthy, but they also can be endearing.