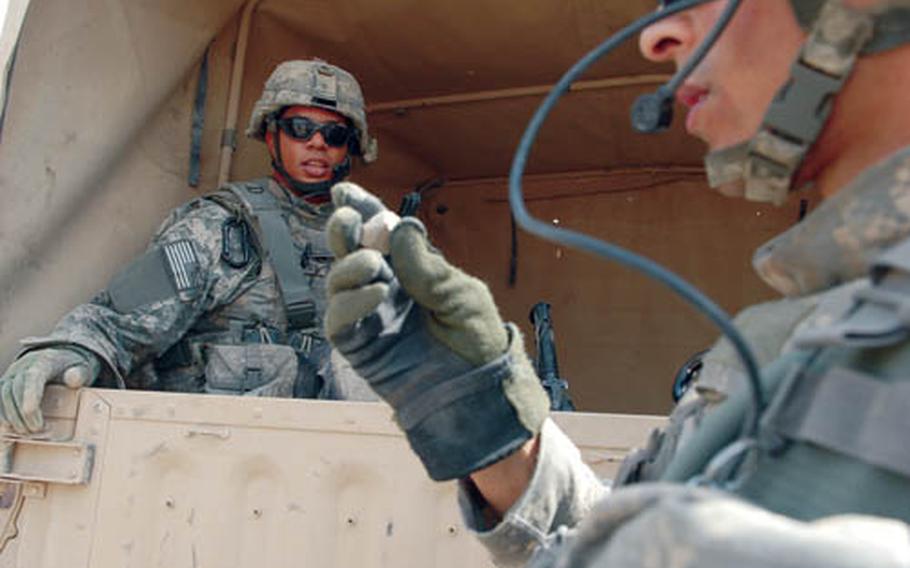 Cpl. James Anderson, background, looks at a piece of tile that an Iraqi boy threw at him Thursday while distributing water filters in Jisr Diyala, Iraq. Rock throwing is a growing problem in the area. (James Warden / S&S)

Cpl. James Anderson, background, looks at a piece of tile that an Iraqi boy threw at him Thursday while distributing water filters in Jisr Diyala, Iraq. Rock throwing is a growing problem in the area. (James Warden / S&S) 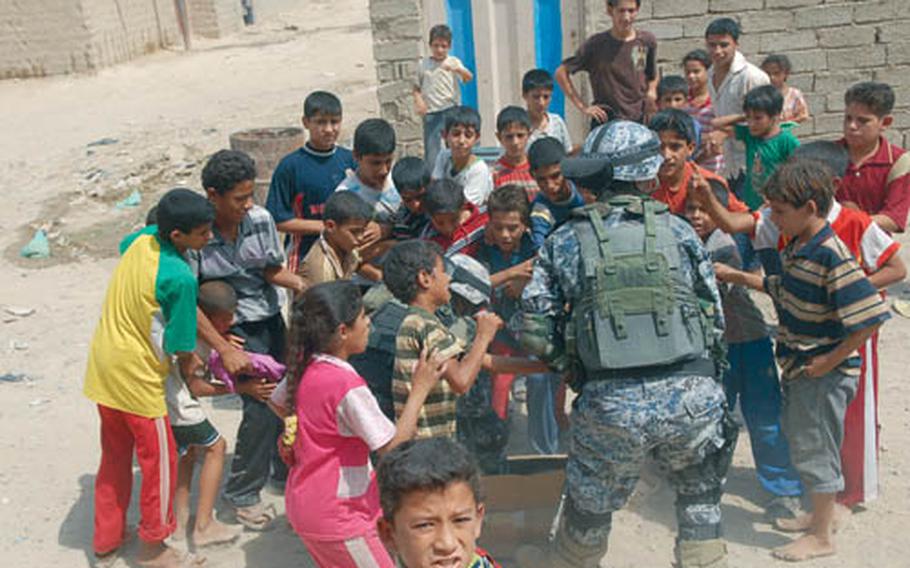 An Iraqi National Police soldier tries to control a scrum of children scrapping over a box of clothes American soldiers handed out Thursday in Jisr Diyala, Iraq. Begging children are a constant on many Iraq streets, and they can turn aggressive when soldiers start handing out items. (James Warden / S&S)

They had a trailer filled with close to 200 water filters that they wanted to give to residents of Jisr Diyala in southeast Baghdad to offer them at least one source of clean water. The distribution started out smoothly, but neighbors soon caught wind of the freebies.

Soon a mob of children too young to even use a water filter harangued the soldiers to hand over the colorful boxes. Boys shoved aside women to get to the boxes. Women handed off boxes to their children and tried to get another filter &#8212;&#8211; or two or three. The soldiers yelled, ""Imchi!" &#8212;"go away &#8211;&#8212; and held back the crowd from the truck to ensure each family got just one filter.

At last, the soldiers closed the sides on the trailer and prepared to head back for more filters, but an angry Iraqi boy had one final shot for the Americans. He hurled a small, sharp piece of tile at the trailer and hit Cpl. James Anderson in the neck.

The incident did not surprise the soldiers, who were expecting some rock throwing before they even left their base Thursday morning. While shooting in the Jisr Diyala area has all but stopped, soldiers must still face kids with rocks.

Platoon leaders and platoon sergeants prepare their soldiers to encounter rock throwing during patrol briefings. Soldiers discuss how best to counter it. Brig. Gen. Emad Ali Abd Ali, the senior National Police commander in the Jisr Diyala area, even urged the ""Sons of Iraq"" leaders under his command to get control of the problem.

The piece of tile that struck Anderson this time was a small one and caused no real damage. But not all incidents are so innocuous. Older children and teenagers have slung brick-sized debris at soldiers.

Many soldiers see larger frustrations behind the rock throwing. Young children hear bad things from their parents and think it&#8217;s all right to throw rocks at American soldiers and Iraqi National Police. Abd Ali said some rock throwers his men questioned said they were mad about the lack of progress in the area, especially a recent power shortage.

Power is a perennial problem across Iraq, but some wealthier areas in Jisr Diyala were able to get around that by bribing the power companies to send more electricity their way. Naturally, that meant other areas got shortchanged power.

That changed with a crackdown on unequal distribution of power. While that gave certain areas their share of electricity again, others weren&#8217;t happy to see their electricity plummet. Many homes have their power turned off as much as five hours for every one hour of power they receive. American soldiers must now combat rumors on the streets that they are shutting down Iraqi power plants.

The power shortages in turn lead to water shortages. Pumps require electricity to move water from fetid rivers into farms. People and plants have a hard time getting the water they need when electricity flows only one out of every six hours. The demand for clean water could be seen during Thursday&#8217;s clamor. While it&#8217;s extremely common to see begging Iraqi children swarm soldiers, women in their long black burqas made up a large part of Thursday&#8217;s throngs.

Compounding those problems, the frustrations come as the Americans are forcing the Iraqi government to take on an ever growing share of the responsibility for taking care of its citizens. At a briefing before a patrol Wednesday, 1st Lt. Aaron Tucker advised his soldiers how to answer people who complained about power shortages.

But with the Iraqi government still struggling to develop its infrastructure, citizens continue to demand help from those who&#8217;have provided it for so long: American soldiers.

Then again, some of the rock throwing may just be petty. Abd Ali said part of it was just kids being kids. Brown noted that no one threw rocks until after they&#8217;had distributed all the filters. The boy may have just been mad he didn&#8217;t get something, too.

In either case, that leaves soldiers out in the streets to contend with wannabe Davids. Soldiers sometimes chase down the children, but they know 10-year-olds aren&#8217;t getting angry at the Americans on their own. Iraqi police have hauled some of the little hurlers into police stations and forced their parents to sign an oath promising not to let them throw rocks. The Americans will even detain older teenagers caught throwing rocks.

Perhaps the clearest message is just to take away the goodies. Brown told his soldiers to pack up and move to a new area if people started throwing rocks. If residents in that neighborhood threw rocks as well, the soldiers would just keep moving to new areas until they found one more welcoming. If no one was welcoming, well, they&#8217;d just take the filters back to their base.

The Americans say they genuinely want to help the areas where they&#8217;re living, feelings that were more easily seen when the situation was calmer. The soldiers smiled and chatted with children and their parents when they refilled their trailer and distributed filters in a different, more polite community. Yet, the rock throwing still leaves an unpleasant feeling for soldiers who must now prepare to confront angry Iraqi children in addition to the myriad other challenges they face.