Troops express thanks, share the holiday meal with Iraqis 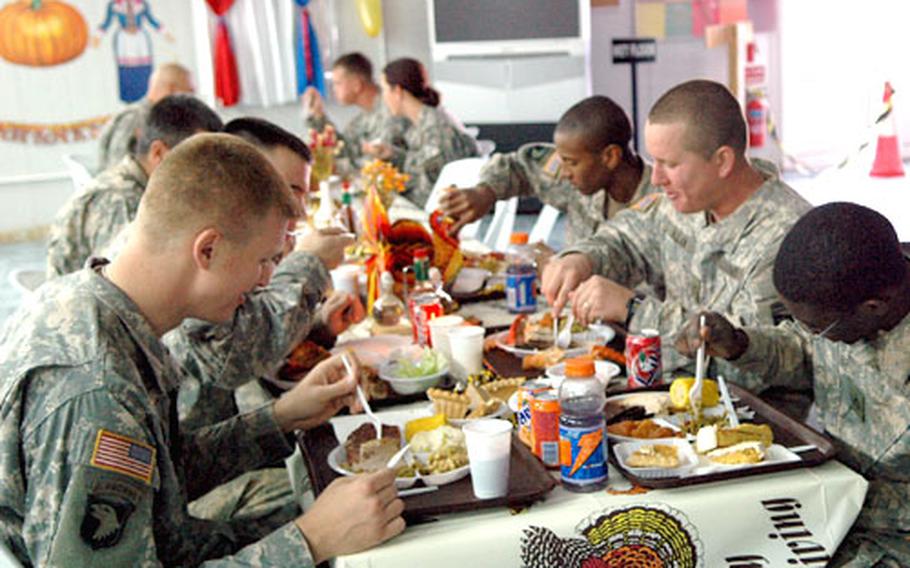 Soldiers at Forward Operating Base Warrior in Iraq dig in to their Thanksgiving feast. (Anita Powell / S&S)

Soldiers at Forward Operating Base Warrior in Iraq dig in to their Thanksgiving feast. (Anita Powell / S&S) An Iraqi Army officer at FOB Warrior settles in for a 21st Century version of the Thanksgiving tale — a hearty meal with his new American friends. (Anita Powell / S&S) 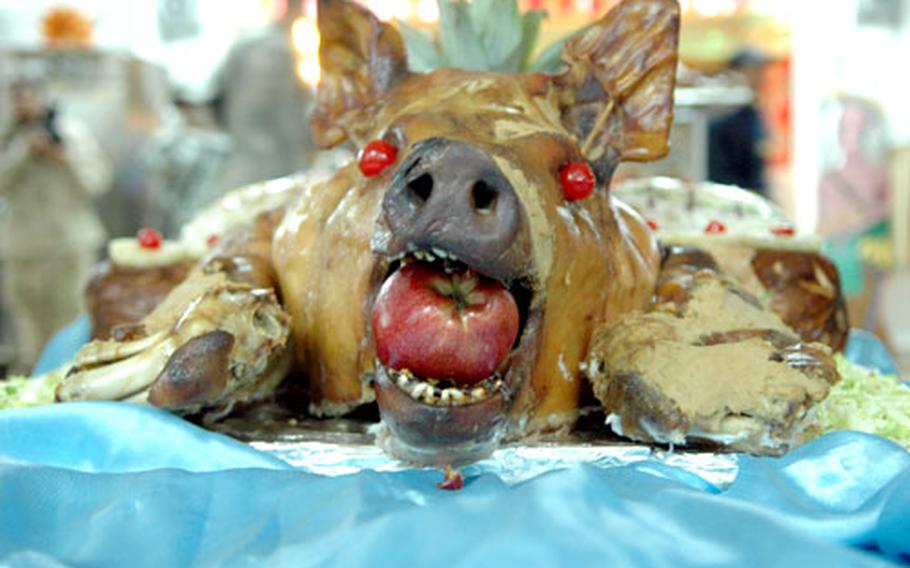 FOB WARRIOR, Iraq &#8212; Soldiers stationed in north-central Iraq celebrated a cheerful but contemplative Thanksgiving, thousands of miles and a war zone apart from their families.

Soldiers from the 1st Brigade Combat Team, 101st Airborne Division of Ft. Campbell, Ky., kicked off the day with a real American tradition: football. In the cool and surprisingly autumn-like morning, Air Force and Army teams cheerfully tossed the pigskin on a dusty, makeshift football field.

Despite the lack of family, real alcohol and home cooking, soldiers cheerfully tucked into their meals.

Brigade officers dished out turkey, prime rib, Cornish hen, smoked ham, lobster, crab, shrimp &#8212; not to mention a slew of vegetables, including mashed potatoes, yams and green beans. Fake wine and eggnog rounded out the meal, which was finished by a collection of pies and pastries.

War-zone trappings, plastic plates and serving utensils notwithstanding, many expressed thanks on the occasion.

When asked whether he would prefer to spend the holiday with his family, he demurred.

Around 1:40 p.m., a detonation erupted on the base. A plume of smoke rose near one of the gates, within sight of the mess hall. An alarm was sounded. Officials later reported that it was a U.S.-controlled detonation of weapons.

In a move reminiscent of the first Thanksgiving, base leaders invited local residents &#8212; Iraqi government and military leaders &#8212; to celebrate alongside them.

At the brigade&#8217;s smaller bases, including forward operating bases Bernstein, Gaines-Mills and McHenry, soldiers celebrated to a more modest spread. FOB McHenry received a surprise visit from Secretary of the Army Francis Harvey.