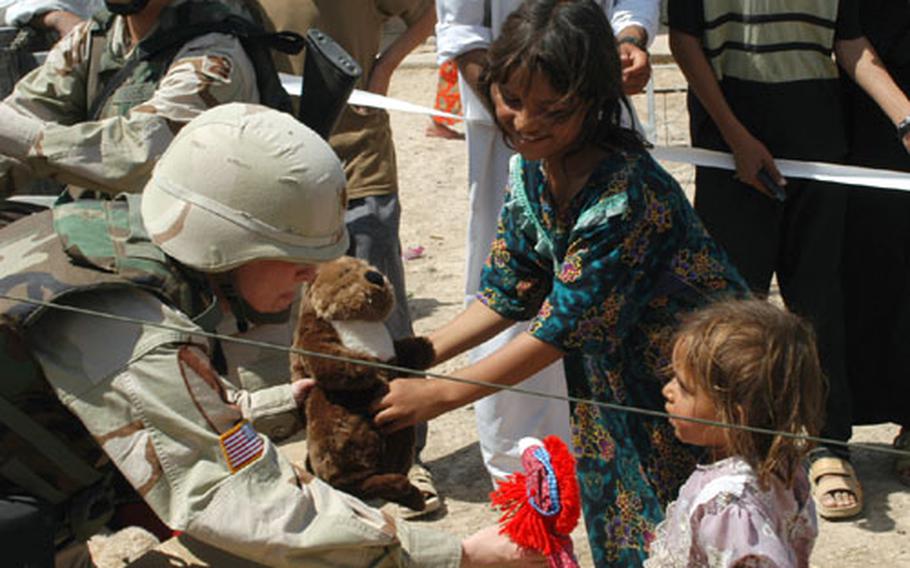 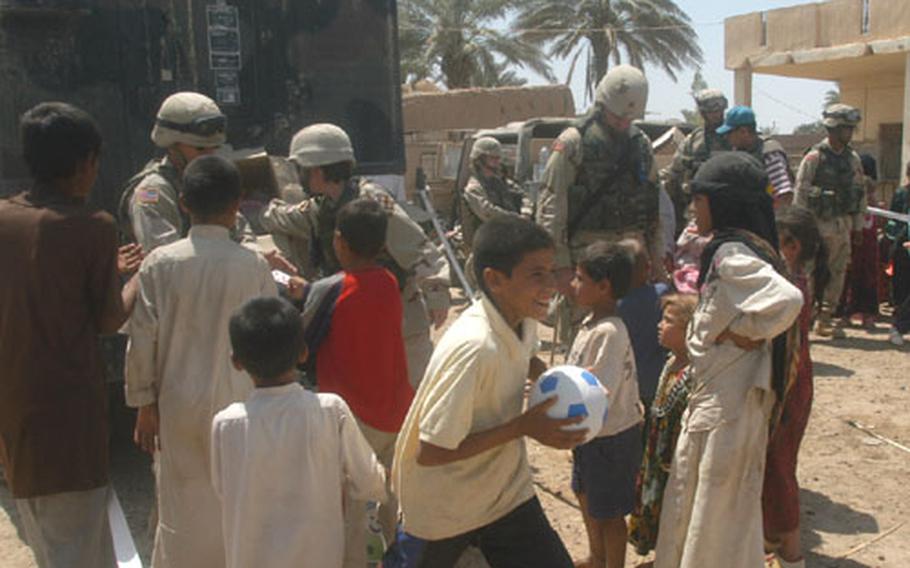 An Iraqi boy runs away with his gift, ready for a game of soccer Monday in the village of Al Fadouz, near Balad, Iraq. Not all children got soccer balls, though, and some were baffled by what they received. Soldiers had to teach some of the youngsters how to use a Frisbee, since the children had never seen one before. After a couple of demonstrations, the kids got the hang of it. (Jessica Inigo / S&S) 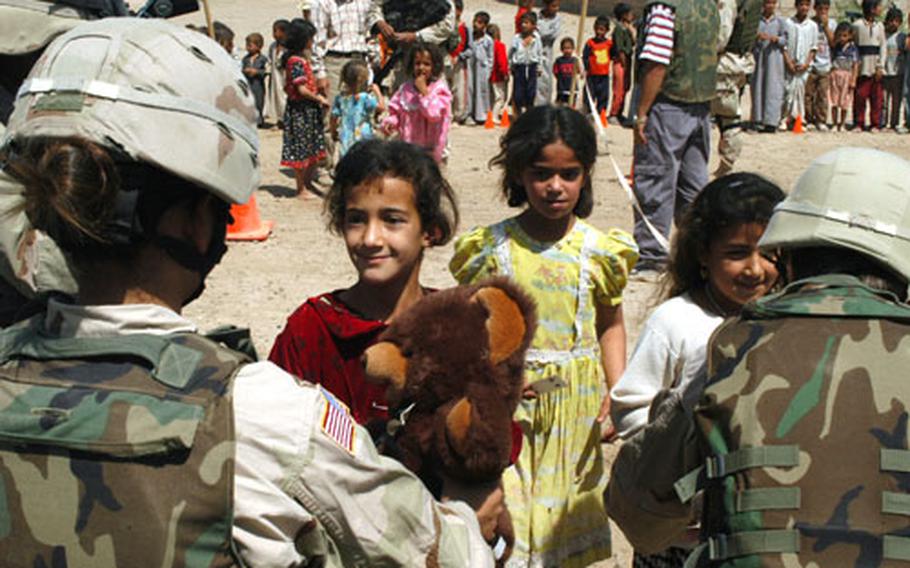 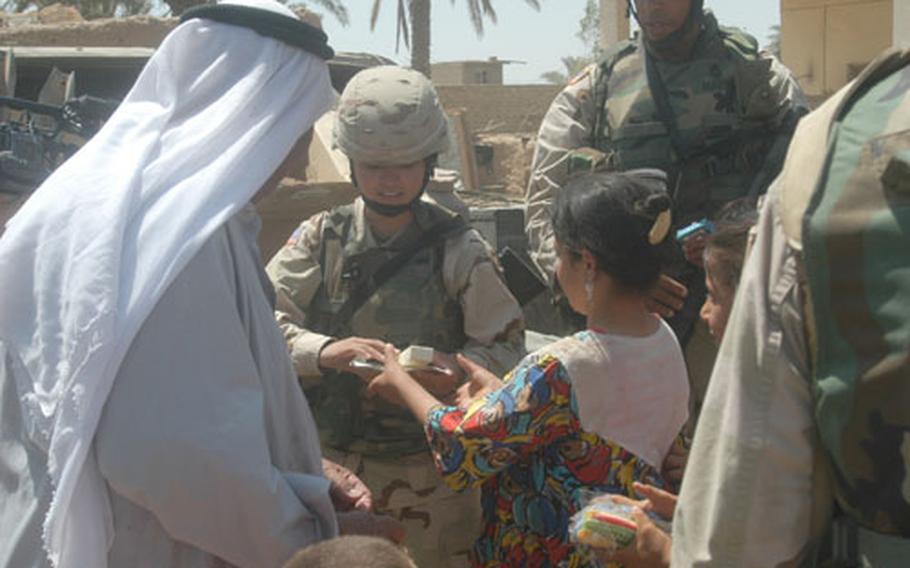 Spc. Maria Torres, of the 81st Brigade Combat Team, a National Guard civil affairs team from Seattle, distributes combs and soap to women of the Temimi tribe during a mission Monday to build better relations with the community outside of LSA Anaconda, Iraq. (Jessica Inigo / S&S) 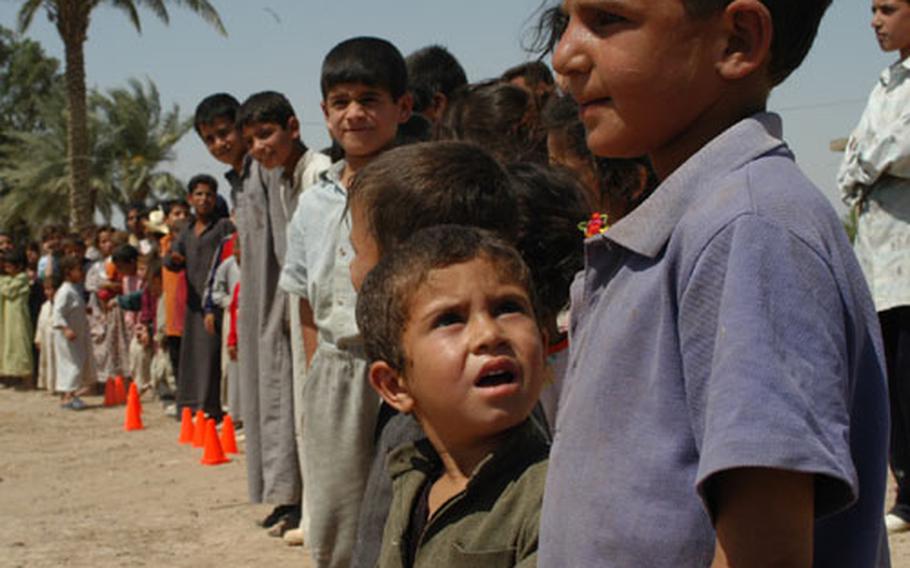 Iraqi children within the Al Fadouz village near Balad, Iraq, wait in line Monday to receive toys, T-shirts, shoes and hygiene products from civil affairs soldiers from LSA Anaconda. Future civil affairs missions include providing poor villages with drinkable water and water for washing with. Many of the communities do not have clean water and use water from canals off the Tigris River. (Jessica Inigo / S&S)

All they need are clothing, hygiene products and some plans to raise the quality of living for Iraqis. Oh, and teddy bears.

On Monday, the unit visited a small tribal village in Balad, Iraq, called Al Fadouz, bearing gifts and leaving a lasting impression on the leaders of the Temimi tribe.

The village&#8217;s sheik, or tribal leader, made a sign and said something in Arabic to the soldiers as they arrived in the impoverished village made out of mud huts and broken stones. He put his hands together and placed them across one cheek resting his head on them as if napping. The translator told the soldiers he means this is a peaceful village: They do not need to worry.

There was peace at the village, but it definitely wasn&#8217;t sleepy.

Children, in evening gowns and tattered clothes, ran barefoot across the gravel to get in line for their surprise. Some stood patiently, while others fought for positions.

Trying to be fair, the troops lined up the children by age and separated boys from girls. As they handed each child a gift, they marked the child&#8217;s thumb with a magic marker.

The clever children were soon running back to the front of the lines, proudly displaying their thumbs, recently licked clean of the purple mark. Some made it through several times.

Making life a little more bearable for the Iraqi communities with gifts is just one part of the unit&#8217;s mission. But all their work is an effort to earn the camaraderie of the local civilians.

&#8220;We&#8217;re doing a classic civil affairs mission: trying to win the hearts and minds of the Iraqi people, especially the younger generation. They are the future of Iraq,&#8221; said the unit&#8217;s commander, Col. Nicholas E. Zoeller, out of Fort Hood, Texas. &#8220;This helps keep the peace on Anaconda, makes sure there are no more rocket and mortar attacks.&#8221;

Outside the gates of Logistics Support Area Anaconda, there are 35 small villages, whose residents mainly survive off the land.

&#8220;There is a crying need for clean, fresh water here,&#8221; said Zoeller. He said the villagers use water straight out of the canals that run into their villages from the Tigris River. Disease, such as typhoid and dysentery, run rampant through the villages.

There are 10 missions going on in different villages to get potable water to the locals, as well as clear water for cleaning. Other projects include agricultural, medical and community rebuilding.

Since January, when the 13th COSCOM and other civil affairs units from North Carolina and Washington got to Iraq, the units have spent $1.5 million in building up schools and clinics within a five-mile radius outside the gates of LSA Anaconda.

About 100,000 people live within the 39 small villages in Balad, and many do not have enough food or clothes, much less adequate shelter.

And with happiness comes friendships that might just change the future of Iraq.