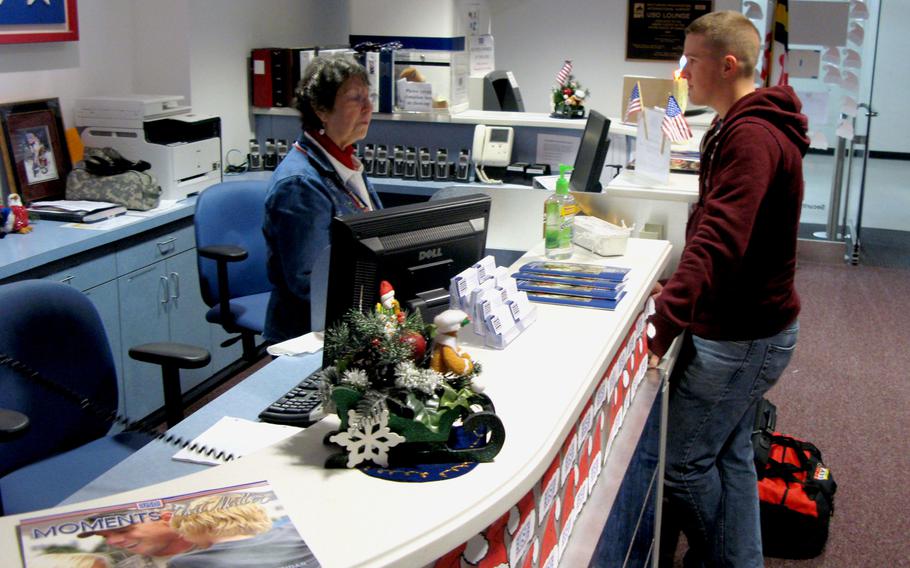 Twyla Hirrilinger, a volunteer at the USO lounge at Baltimore-Washington International Airport, greets Marine Corps Pfc. Zachary Haase as he arrives at the lounge during holiday travel Dec. 23, 2009. (Donna Miles/Office of the Secretary of Defense Public Affairs)

KAISERSLAUTERN, Germany — Some servicemembers could lose leave days when a policy that allowed troops to keep up to 75 days of leave ends Oct. 1.

Troops are being urged to check their leave balances and use any use-or-lose leave they have before the end of the fiscal year, when the amount of leave that can be carried forward drops back to 60 days. There’s just one hiccup: The Defense Finance and Accounting Service system that provides troops with biweekly pay and leave statements is misreporting troops’ use-or-lose leave balances.

On March 18, the Army’s personnel division blasted a memo to the force advising soldiers and commanders “that the number of use/lose leave days listed in their leave and earning statement (LES) use/block is incorrect.” That’s because it doesn’t take into account the end of the temporary authorization that allowed members to carry additional leave.

As a result, some servicemembers could have up to 15 days more of use-or-lose leave to use than is reflected on their LESs. Personnel who don’t use their excess leave by the end of the fiscal year will lose it.

DFAS is working to fix the disparity and “anticipates to have the glitch fixed by end of month June,” said Lt. Col. Brian Ketz, deputy director of the Army’s 266th Financial Management Support Center in Kaiserslautern.

Personnel have been able to carry over up to 75 days of annual leave since 2008, when Congress authorized a temporary increase. Lawmakers extended the policy in 2013 but didn’t renew it again.

The change doesn’t affect leave earned during lengthy deployments. Personnel serving in areas subject to hostile fire or imminent danger pay for at least 120 continuous days will still qualify for “special leave accrual,” or SLA, which can allow servicemembers to carry over up to 120 days of leave from one fiscal year to the next. SLA leave has a use-by date noted on members’ leave and earning statements.

But on Oct. 1, any leave in excess of 60 days not coded SLA will be lost, according to the Army’s memo.

The memo tells commanders to monitor soldiers’ leave balances and encourage them to use their excess leave so they don’t lose it.