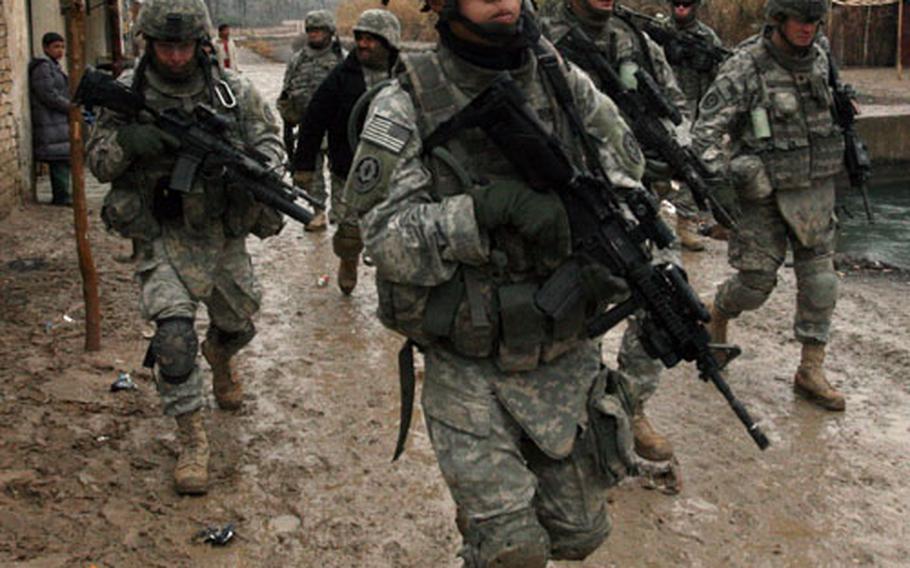 U.S. soldiers with 3rd Squadron, 2nd Cavalry (Stryker) Regiment patrol a village near Muqdadiyah. Lt. Col. Rod Coffey, the squadron commander, has said that he believes 80 to 90 more insurgents may be at large and has ordered a lockdown on four main villages. (Drew Brown / S&S)

U.S. soldiers with 3rd Squadron, 2nd Cavalry (Stryker) Regiment patrol a village near Muqdadiyah. Lt. Col. Rod Coffey, the squadron commander, has said that he believes 80 to 90 more insurgents may be at large and has ordered a lockdown on four main villages. (Drew Brown / S&S) 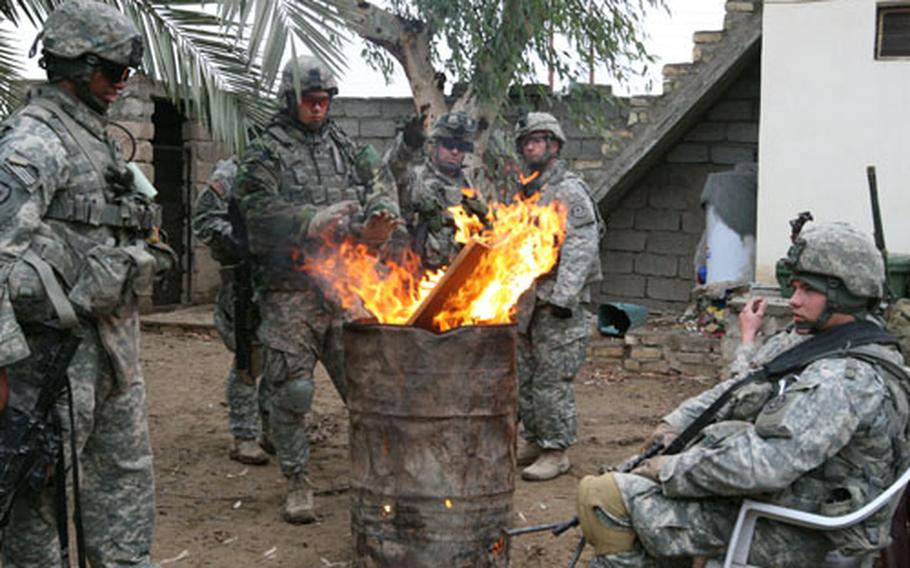 Soldiers with 3rd Squadron, 2nd Cavalry (Stryker) Regiment, based in Vilseck, Germany, gather by a fire Wednesday during a day of rainy, muddy patrols near Muqdadiyah in Iraq’s Diyala province. (Drew Brown / S&S) 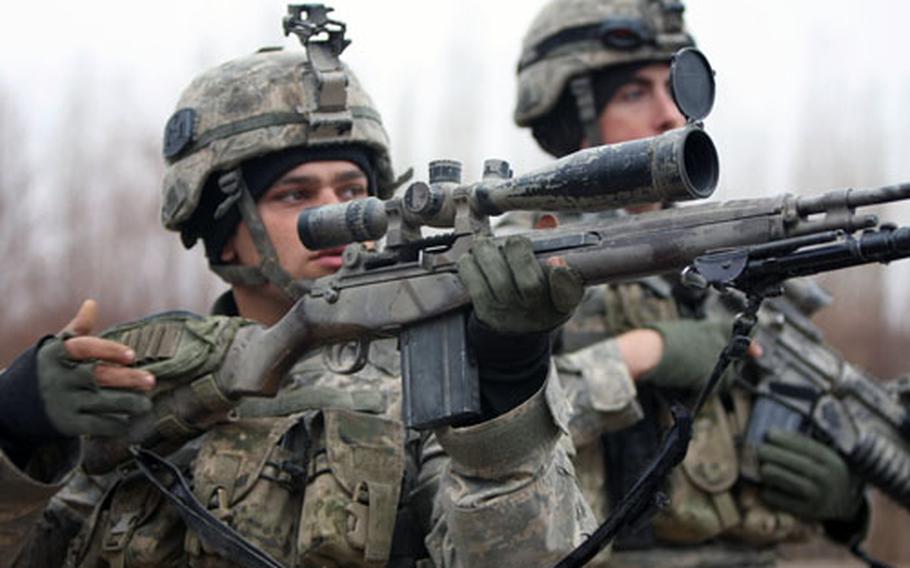 Sgt. Mikal Vik, 23, of Hartford, Conn., checks out a roadside bomb Wednesday through the scope of his sniper rifle near Muqdadiyah in Iraq’s Diyala province as Spc. Travis O’Hanlon, of Boston, looks on. The soldiers, with 3rd Squadron, 2nd Cavalry (Stryker) Regiment based in Vilseck, Germany, were on patrol as part of Operation Iron Harvest. (Drew Brown / S&S) 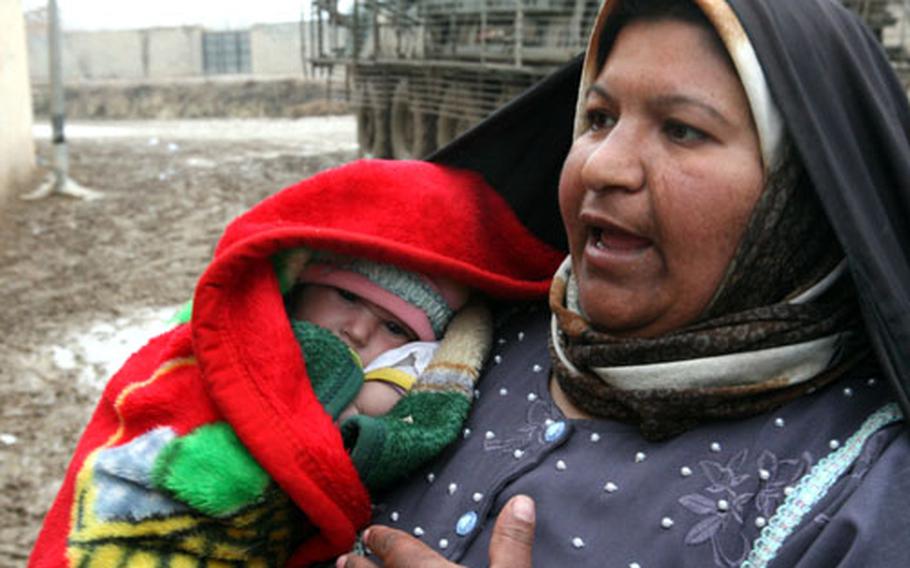 An Iraqi woman on Wednesday asks U.S. forces with 3rd Squadron, 2nd Cavalry (Stryker) Regiment if she can pass through a checkpoint to take her sick child to a hospital in a neighboring village in Iraq’s Diyala province. (Drew Brown / S&S) 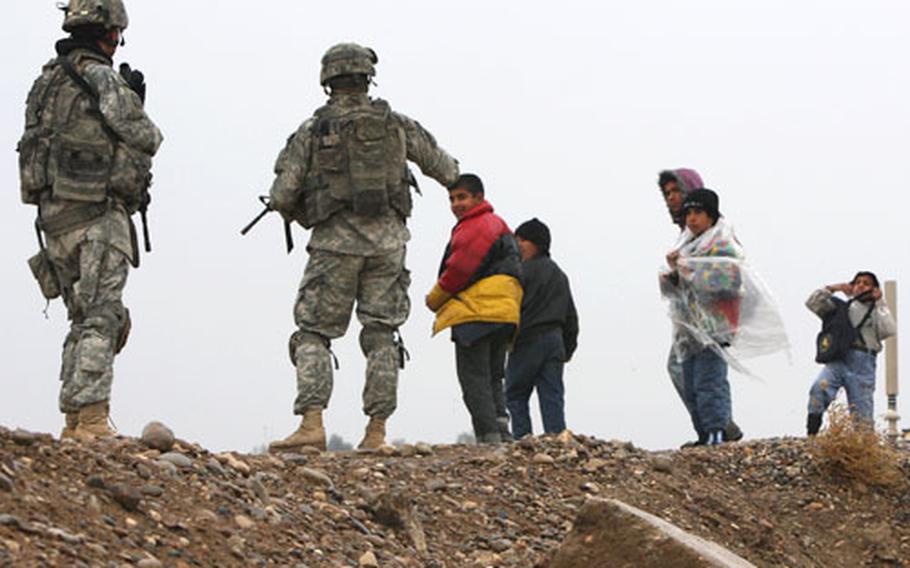 But, aside from a few ineffective potshots during the first couple of days, direct engagement with the al-Qaida fighters they came to find has been practically nonexistent.

Instead, what the Vilseck, Germany-based troops have found in this region, approximately 40 miles northeast of Baghdad and known as &#8220;the breadbasket&#8221; to U.S. forces, has proved to be much more dangerous &#8212; scores of roadside bombs, cars rigged with explosives, booby-trapped houses and date palm groves studded with landmines.

So now the troops face a twofold task: ferreting out the insurgents who they say have taken refuge in a frightened and terrorized population and finding the deadly explosives those fighters have left behind.

Only then can the soldiers focus on re-establishing local government and start reconstruction projects.

It hasn&#8217;t been easy. On Jan. 9, just a day after the start of Operation Iron Harvest, a sweep designed to clear insurgents who fled into Diyala province after last year&#8217;s &#8220;surge&#8221; of American forces into Baghdad, six soldiers from the regiment were killed when they entered a house that had been rigged with explosives.

Since then, according to Lt. Col. Rod Coffey, the squadron commander, his soldiers have found eight more booby-trapped dwellings. In addition, they&#8217;ve encountered 90 improvised bombs &#8212; 85 of which were discovered before they went off &#8212; plus numerous weapons caches, several car bombs and an al-Qaida camp full of training and propaganda materials. Locals have warned of landmines in the date palm groves that checker the landscape here.

&#8220;This was definitely a staging base safe area and a place where they had an administrative presence,&#8221; said Coffey, 45, of Arnold, Md.

The soldiers have killed three enemy fighters so far and detained around 40 others, including 11 who were taken into custody Wednesday. Five were later released. Coffey believes 80 to 90 more insurgents remain at large. In order to facilitate the search for them, Coffey has ordered his troops to lock down the four main villages in his 43-square-mile operating area. The troops maintain tight control of who goes in and out. No one can enter or leave without a pass issued by Coffey&#8217;s forces.

Despite the near-constant presence of U.S. forces, the enemy has already begun to fight back. On Wednesday, a route-clearance team of engineers discovered two new roadside bomb emplacements. One was rigged with 25 pounds of homemade explosives and a propane tank. The other contained two 122 mm rockets.

But knowing who the target is doesn&#8217;t necessarily mean that finding him will be easy.

Around midafternoon, Coffey and several other officers met with the leaders of three local villages, at least one of whom was rumored to have sheltered Abu Aa&#8217;esha&#8217;s wife and children in recent days and was very likely related to the insurgent figure.

It was a classic good cop/bad cop routine. After a captain had made the initial introductions and small talk, Coffey came into the room and took a hard line.

There was a chance that some al-Qaida fighters might stand a chance of reconciling with the Iraqi government if they laid down their weapons and gave themselves up, Coffey said. But no such opportunity would be given to Abu Aa&#8217;esha.

Calling him a &#8220;murderer&#8221; who &#8220;deserved to be killed,&#8221; Coffey said his troops would keep the villages locked down, which would keep local farmers from moving their crops to market, until the al-Qaida fighters hiding in the area were captured, killed or gave themselves up. Then he issued an ultimatum.

The three village leaders said nothing as the lieutenant colonel stood and strode out of the room.

Outside, Coffey said that making the vague threat was risky. However, it could also put just enough pressure on the three village leaders that they might actually give up the wanted al-Qaida figure.