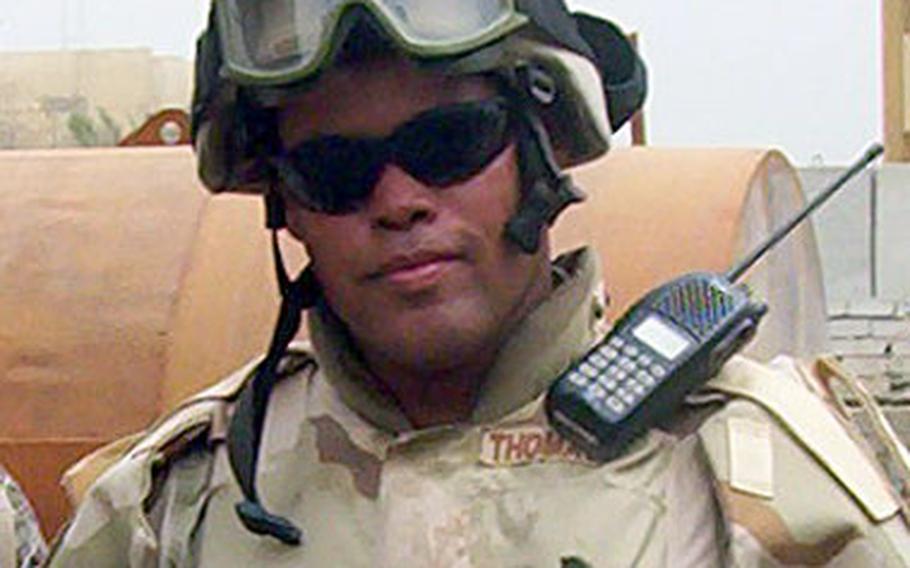 Staff Sgt. Charles Thomas in Iraq last year. Thomas, from the Ohio National Guard, recently volunteered to spend a second consecutive year in Iraq. “There are days I regret I volunteered,” he said. “They’re becoming more and more frequent.” (Courtesy of Charles Thomas)

Staff Sgt. Charles Thomas in Iraq last year. Thomas, from the Ohio National Guard, recently volunteered to spend a second consecutive year in Iraq. “There are days I regret I volunteered,” he said. “They’re becoming more and more frequent.” (Courtesy of Charles Thomas) Scott Bowans says he’s had the time of his life over the past two years, even though most of that time has been spent on a dusty little corner of Camp Victory. (Nancy Montgomery / S&S) Michael Tuazon, from the Philippines, has hated his two years in Iraq and says he was paid far less than promised. But he signed up for another year with another company. (Nancy Montgomery / S&S)

But for some soldiers and civilians, the secret is that Iraq is also, paradoxically, a respite.

All the dulling routines required in daily life &#8212; making dinner, doing laundry, paying bills, rearing children &#8212; are suspended. Life is stripped down to your job, your colleagues and seafood night at the dining facility.

One spring day, after a rain that left Camp Victory with standing pools of dirty water, a young captain carefully made her way over wooden planks to a fetid Porta-John. This sort of thing must get tiresome, someone remarked.

And there are some who choose to stay not just one year, but two or even three. Some do it for the thrill, and the money. Some, to avoid what waits at home, and the money. And then there&#8217;s the money.

A contractor&#8217;s lifeScott Bowans&#8217; whole universe is a dusty little corner of Camp Victory, down the road from the laundry and across the parking lot from the smaller chow hall. There, in Building 39, as KBR billeting supervisor, he assigns tents and trailers to the thousands of troops and civilians.

While working, Bowans has left Victory only once &#8212; to the International Zone.

Bowans and his wife both work for KBR. Having her with him &#8212; actually she got her job first &#8212; has made staying in Iraq easier.

The Bowanses had been living near Houston. She was the general manager of a Marriott hotel and he sold fine wine and champagne.

For the moneyMichael Tuazon left his home in the Philippines two years ago to work in Iraq and save money to build a house. And for the past two years, he has hated almost every day. Still, Tuazon has signed up for another year.

Until March, he worked for Prime Projects International, a subcontractor that provides thousands of workers from impoverished countries like the Philippines and Sri Lanka to staff mess halls, clean bathrooms and do other manual labor.

Unlike soldiers who live in tents with four or five others or two-man trailers, workers like Tuazon share trailers with 11 others.

Tuazon misses everything about his home, he said: the weather, his family, his girlfriend. Despite his professed misery, when Tuazon&#8217;s contract ended in March, he signed up for another year with another company, AMECO, which he said was to pay him $1,800 a month as a mechanic.

And he has photographs you don&#8217;t want to see: an Iraqi, still at the wheel of his car, though dead from a terrible gunshot wound to the head. Thomas experienced things that both delighted and disgusted him, and the excitement, he said, was &#8220;addictive.&#8221;

When it came time for him to resume his life in Ohio as a grocery store warehouseman, married man, father and grandfather of three, he found himself instead signing up to stay another year.

His own unit, the 16th Engineer Brigade, that he&#8217;d been with for 20 years, was starting its own Iraq deployment. And finally, his new job would keep him relatively safe and usually within the confines of Camp Victory.

But Thomas, 49, sometimes worries that the extra year might be pushing his luck.