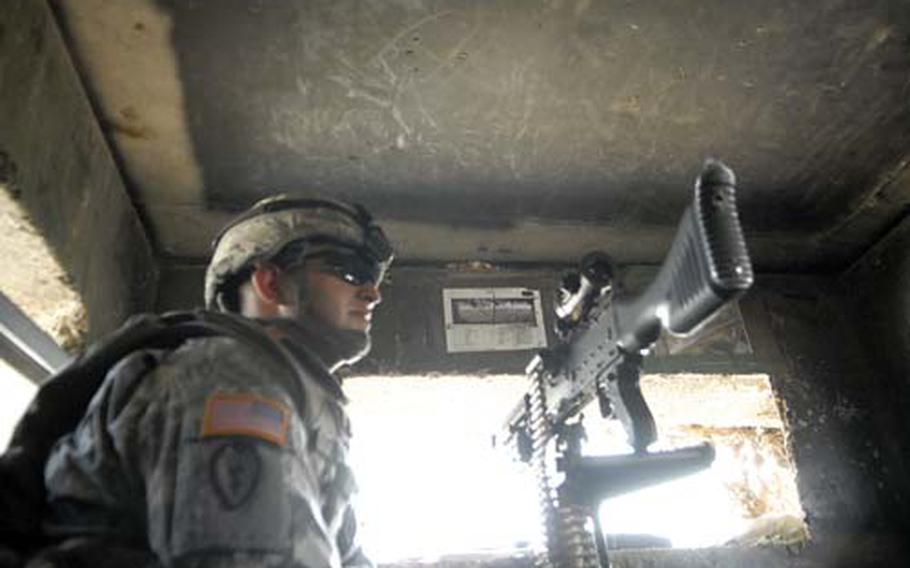 Pfc. Robert Young of the 2nd Battalion, 11th Field Artillery, mans a guard post at the gates of Camp Taji in Iraq. Troops say the lack of violence in the area is an encouraging sign of stability, but having fewer attacks makes it challenging to stay focused on their jobs. (Leo Shane III / S&S)

CAMP TAJI, Iraq &#8212; Spc. Brian Lockyer spends 12 hours a day in a sweltering guard tower overlooking the front gate of this base.

"It sucks, but it&#8217;s important," said Lockyer, a soldier from the 2nd Battalion, 11th Field Artillery. "You always have to be alert case something happens, but usually nothing does. It gets hot, there&#8217;s nothing to do, but you still have to be up here."

As the situation in Baghdad&#8217;s northern suburbs has calmed over the last year, many troops have been left wondering what role they have left in the region.

Attacks are down more the 70 percent from last year. Combat patrols and frequent engagements with enemy insurgents have given way to non-military meet-and-greets and infrastructure projects. Sports injuries outnumber combat wounds at the base medical clinic by a significant margin.

"The Iraqis are the ones now who are patrolling to show a presence on the street, to show their face to whatever criminal element is left. We don&#8217;t need to be the ones doing that."

But the changing role has left many soldiers scratching their heads.

McCaffrey was stationed in Mosul three years ago. In his only visit to Taji on that tour, his patrol was hit by a roadside bomb, one of many that U.S. forces encountered there.

Route clearance in the area is still a priority, he said, but now so are projects to improve essential services and regular meetings with local government officials. Patrols can have both lethal and nonlethal goals.

"They aren&#8217;t mutually exclusive jobs," he said. "Security plays an important fundamental aspect to everything we do, but working to improve local systems is a priority too."

Capt. Emile Wijnans, brigade psychologist for the 2-25, said he&#8217;s started to see that change in mission reflected in his patients. Two years ago, when he was stationed on the east side of Baghdad, many of the soldiers he spoke with were dealing with combat stress and the loss of friends.

"Now the guys say they&#8217;re seeing less combat, and fewer losses," he said. "The morale is better but the fatigue is just as great. There&#8217;s less bitterness, but life is more garrison-like, and that creates a different stress."

Wijnans said he&#8217;s heard from many troops bitter about uniform checks and new rules for patrols, moves they see as unnecessary in light of the calmer atmosphere in the country.

Others complain that they signed up "to be Rambo," not to push paperwork and do civil affairs jobs.

"So most of what we see is fatigue, boredom and depression," he said.

"They&#8217;re still away from their families, in the heat, and that adds to their stress."

Lockyer said he keeps energy drinks at his guard post to keep him alert through the long shifts. Lorenz said he keeps retraining, and doubles up security details when he&#8217;s out on patrol. Most troops say they can&#8217;t imagine U.S. forces pulling out of the region now, even if things are much calmer.

Lt. Col. Richard Wilson, commander of the 1-27, said he&#8217;s emphasized keeping vigilant in his briefings and visits with troops.

"Attacks can still happen," he said. "I&#8217;ve been trying to get the guys to the training ranges because if you haven&#8217;t pulled the trigger in a while you&#8217;ll probably be antsy, or not antsy enough, when the time comes."

Most of the troops in the Brigade Combat Team just passed the nine-month mark of their 15-month tour in Iraq. McCaffrey said he&#8217;s made sure commanders under him explain the gains made throughout the region with the hope that troops are encouraged by the positive developments.

"I think there is a responsibility now of the Iraqi government to transfer this productivity into other opportunities," he said. "But we&#8217;re having good success, and I think the guys see that."