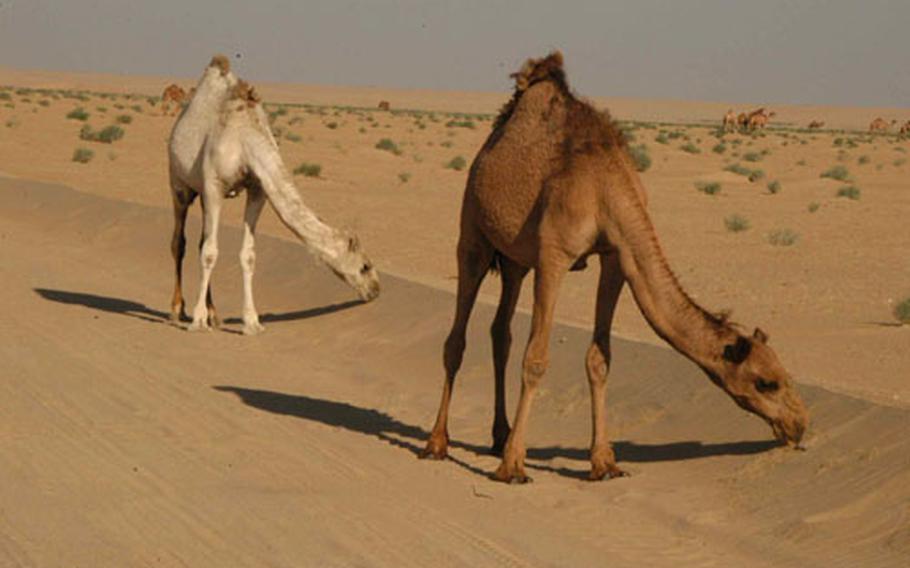 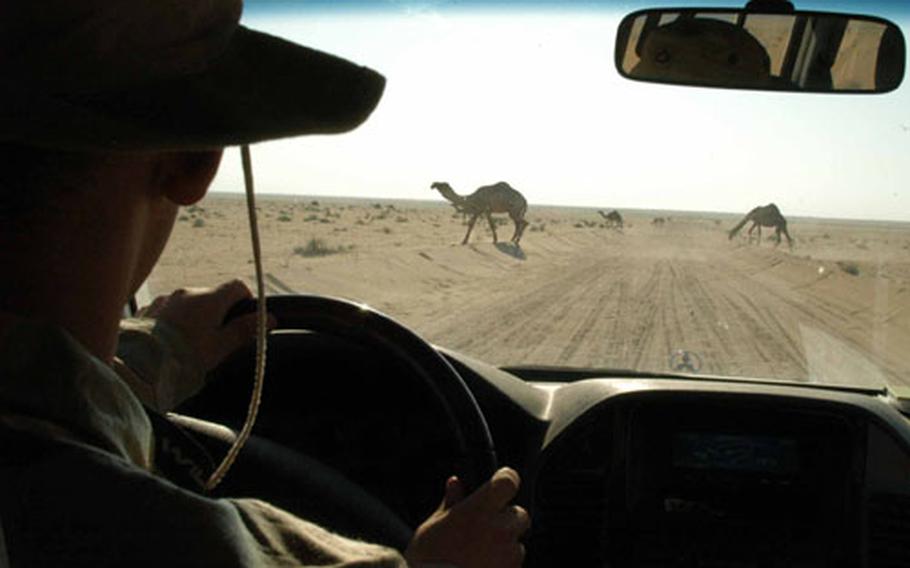 Camels are a driving hazard for 2nd ID soldiers training at Udairi Range in Kuwait. (By Seth Robson / S&S)

CAMP BUEHRING, Kuwait &#8212; At first glance, the desert that surrounds Camp Buehring and Udairi Range appears to be a desolate, hellish training environment.

Soldiers who live there, including those from the 2nd Infantry Division&#8217;s 2nd Brigade Combat Team, known as the Strikeforce, have discovered there is more to this scorched landscape than meets the eye.

A close inspection of the ground reveals a few sickly plants struggling to make a home in the sand. And a few miles from Camp Buehring there is even a tree. It grows a few hundred yards from Iron Horse Road, the last piece of hardball before the turn-off for the camp.

The tree is so unique that soldiers are thinking up names for it. Some 2nd ID soldiers have suggested calling it the Kuwaiti Tree of Knowledge in honor of another Tree of Knowledge growing at Twin Bridges Training Area in South Korea.

Scurrying amongst the sparse vegetation are deadly insects such as scorpions and camel-spiders.

Salem, Ohio, native Warrant Officer Randall Menough, 41, of the 699th Maintenance Company, said these creatures sometimes make their homes at the engineering workshop he operates in a corner of Camp Buehring.

A camel spider bit a soldier after he picked up a sheet of metal it was living under, he said.

&#8220;The camel spider is a meat eater. They are not poisonous but they inject you with a numbing agent,&#8221; Menough explained.

The soldier was kept in the hospital overnight for observation but was released the next day suffering effects similar to those of a bee-sting victim.

After five months in the desert, Menough has accumulated a collection of scorpions assembled in a glass terrarium to amuse visitors. There are two types of scorpions &#8212; small yellow ones and large black ones.

The smaller scorpions are more venomous than their larger cousins, but when it comes to a battle they usually succumb to their more heavily armored foes, soldiers said.

Perhaps the most striking desert creatures are the cat-sized green and yellow lizards that prowl the wasteland. Their spiky tails and faces give them the appearance of miniature Tyrannosaurus Rexes.

There are no lizards in Menough&#8217;s miniature zoo and he has no plans to acquire one.

The cold-blooded reptiles like to bask in the sun or scuttle about the dusty landscape searching for prey.

Each appears to have marked out its own territory, which it patrols vigilantly in the hot sun.

However, an attempt to make friends with one of the lizards is rebuffed. The beast scuttles off, stopping every so often to glance back over its shoulder at the two-legged stranger before disappearing down its hole, a small depression in the sand that resembles a rabbit&#8217;s burrow.

The mega-fauna of this marvelous eco-system are the towering camels that strut about the desert haughtily gazing down at passersby, seemingly mocking the camel-backs worn by the soldiers.

These majestic beasts are uniquely equipped to survive out here, retaining enough water in their humps to survive where ordinary beasts would perish.

The camels are no more amicable than the lizards. Some soldiers make sport of newcomers by telling them they can pet the camels, and then laugh when a would-be camel-petter recoils in fear as a seemingly docile beast spits and snaps at him.

Spc. Christopher Pizzino, 21, of Cleveland, from Battery B, 2nd Battalion, 17th Field Artillery Regiment found a pile of camel bones in the desert. He took the skull of the deceased animal and tied it to the front of his Humvee. Now its vacant eyes stare out from the hood as if to say: &#8220;This could happen to you if you don&#8217;t drink enough water, soldier.&#8221;

The young soldiers commander, Lt. Col. John Fant has also been on the lookout for wildlife, spotting a desert fox the other day.