Privates 1st Class William Price, left, of Waco, Texas, and Justin Fulford, of Crawfordsville, Ind., build a table out of plywood and two-by-fours at Combat Outpost Steel in Ta&#39;meem, Iraq on Thursday. The table was to be used for Thanksgiving dinner. (Charlie Coon / S&S)

Privates 1st Class William Price, left, of Waco, Texas, and Justin Fulford, of Crawfordsville, Ind., build a table out of plywood and two-by-fours at Combat Outpost Steel in Ta&#39;meem, Iraq on Thursday. The table was to be used for Thanksgiving dinner. (Charlie Coon / S&S) 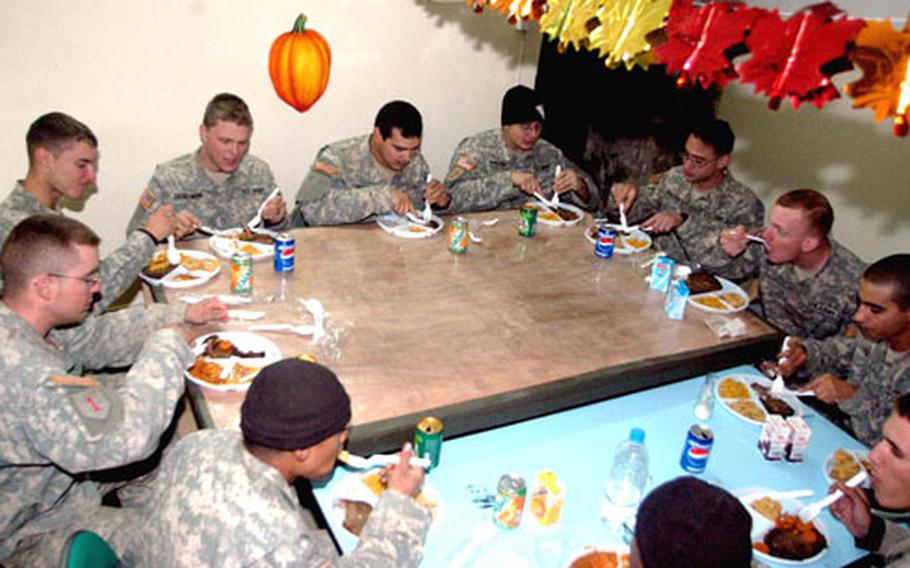 TA&#8217;MEEM, Iraq &#8212; Inside the rings of concrete barriers, sandbags and concertina wire, and protected by guards with guns pointed outward, a group of soldiers planned to take time out for Thanksgiving.

There&#8217;d be no Macy&#8217;s parade because there was no TV, and no football games either. Instead, there was the screeching of a circular saw and pounding of a hammer as some soldiers built tables out of plywood and two-by-fours.

In a few hours, the soldiers hoped, there would be something to put on the tables. Turkey, stuffing, mashed potatoes. Maybe even pie. They&#8217;d be thankful for it.

Combat Outpost Steel is a makeshift fortress in Ta&#8217;meem, a violent enclave on the outskirts of Ramadi. It isn&#8217;t like one of the fancy forward operating bases, or FOBs, where most U.S. troops stay while in occupied-Iraq.

Food at the FOBs is piled high four times a day, including the midnight meal. It&#8217;s all you can eat, all the time.

It would be brought by a truck, escorted by a small convoy of armored-plated Humvees with mounted machine guns. The convoy would run a two-mile gantlet from Camp Ramadi.

The compound was established six weeks ago to start reining in the insurgency in the restive neighborhood.

On Wednesday night, three blocks away, Iraqi and U.S. troops from the fortress raided a house and confiscated six RPGs and 11 60mm mortar rounds, along with other paraphernalia of death.

On Thanksgiving Day, about a mile away, an Iraqi police car was hit by a roadside bomb, wounding two policemen.

So Thanksgiving at COP Steel was mostly business as usual.

Inside the compound, Spc. Jeremy Holster and Private 1st Class Todd Strickland rigged up wireless Internet. Maybe the troops would be able to send home an e-mail for Thanksgiving.

Holster and Strickland, who are both on their second deployments to Iraq, said they were thankful for little things back home: Savannah Holster, 6 months, and Max Strickland, 10 months, the first child for each.

Some cigars were at the ready, and even a &#8220;HAPPY THANKSGIVING&#8221; cutout to be stretched out and hung on the wall. But it was pretty austere: There was no paper turkey that unfolded like an accordion, and no centerpiece for the plywood table.

Because of the earlier raid, when the enemy had some of its ammo taken away, there was a chance the party could be spoiled.

Maybe it would wait until after the pie.