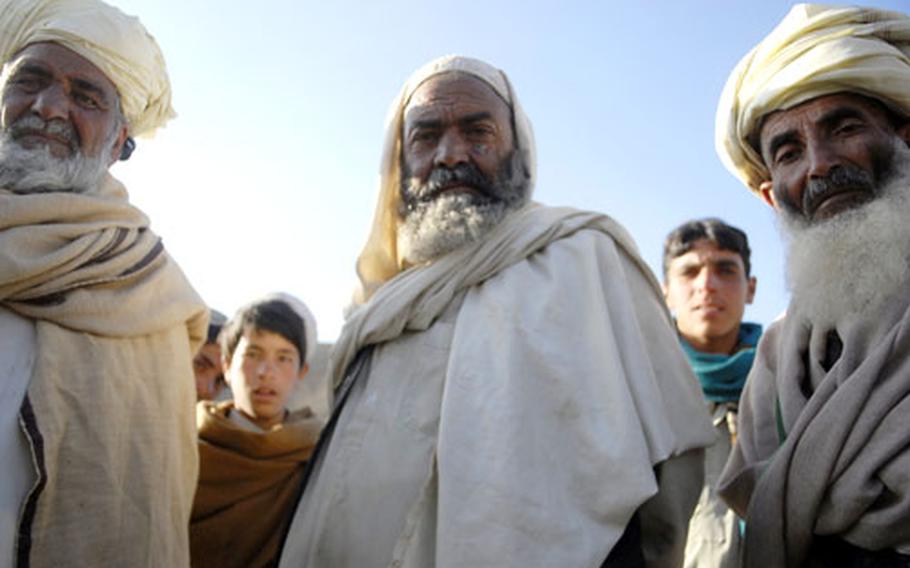 Village elders in Spise gaze into the camera of a photographer accompanying U.S. troops and Afghan police on a trip to assess the needs of remote villages of Logar Province. The people of the village get few visitors. (Photos by Les Neuhaus/S&S)

Village elders in Spise gaze into the camera of a photographer accompanying U.S. troops and Afghan police on a trip to assess the needs of remote villages of Logar Province. The people of the village get few visitors. (Photos by Les Neuhaus/S&S) 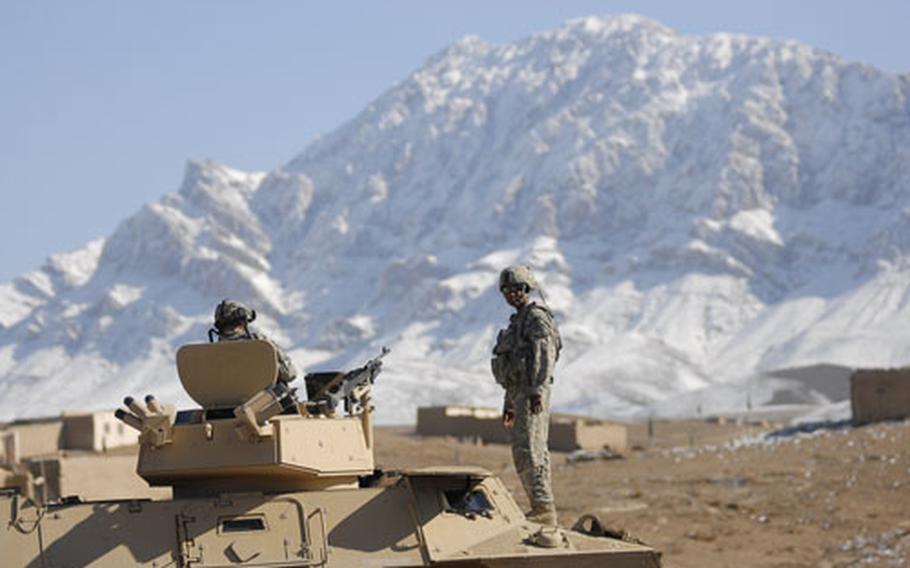 U.S. Army Spc. Craig Williams, 21, of Vacherie, La., stands atop an armored vehicle on Friday in the eastern Afghan village of Abchakan in Logar Province. Snow covers a mountain side in the background. Williams, a military policeman with the 82nd Airborne Division, was in the isolated village to help Afghan policemen assess the needs of the citizenry and to ask about possible Taliban activity. () 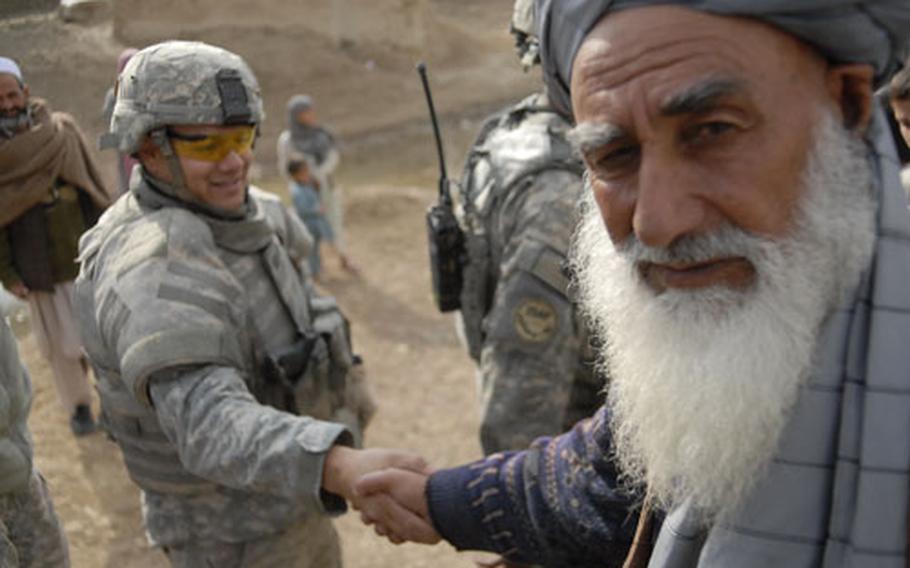 An Afghan elder in the village of Baboos shakes the hand of U.S. Army Capt. Gabriel Ortiz, 31, from Sierra Vista, Ariz., who was accompanying Afghan police in the small community to determine whether they had sufficient health, water and power services, among other things. () 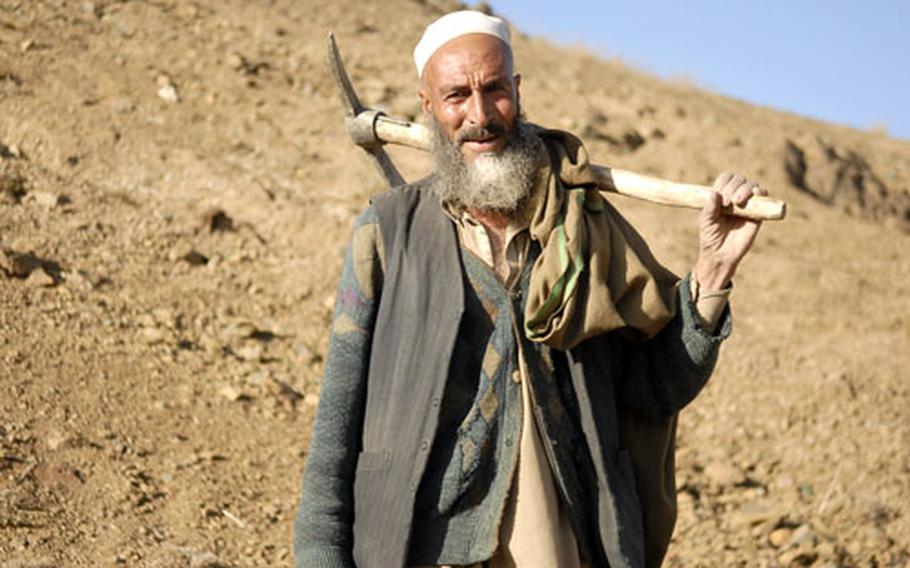 50-year-old Malik Gon, a freelance laborer, talks with U.S. troops from the 82nd Airborne Division on Friday in his remote mountain village known as Spise, which is not labeled on even detailed maps. ()

ABCHAKAN, Afghanistan &#8212; Combat in Afghanistan can be interpreted in different ways.

Not all fighting is done with bullets. Part of the effort is to bring development to such a poor nation.

Rolling into isolated mountain villages in convoys of heavily armored vehicles can turn a lot of heads, but villagers quickly learn that the military&#8217;s hard-looking posture is not so menacing.

Electricity, clean water, schools, health clinics and roads are at the top of every Afghan&#8217;s wish list, and with winter settling in, U.S. troops are doing what they can to assess which of the province&#8217;s villages are the neediest.

At the same time, they are asking about other worries &#8212; Taliban threats, drug smuggling and trafficking of weapons &#8212; as part of NATO&#8217;s goal to create stability.

Hart, a native of Keeseville, N.Y., native,and a combination of other military teams and Afghan police journeyed through roads in Logar&#8217;s Puli Alam District on Friday and Saturday, traversing curvy, steep ridgelines and other routes through the vast, craggy plains to get the message out that they are here to help.

&#8220;We gather the information from village elders and pass it on to the PRTs and then they prioritize the needs,&#8221; said Capt. Gabriel Ortiz, 31, from Sierra Vista, Ariz., referring to the Army&#8217;s provincial reconstruction teams.

Ortiz is the commander of what is known as an embedded training team &#8212; U.S. military units that attach themselves to the local Afghan police, teaching them about traditional law enforcement roles, weapons training, professionalism and how to carry out assessments in the villages.

The goal is to have the Afghan police conduct the village evaluations on their own, Ortiz said. That can lead to the ultimate objective of stability, which can be hard to come by in a country that for years has known nothing but instability.

Yet, as Ortiz and Hart, whose men helped establish security on the assessment visits, watched the Afghan police carry out the assessments in Abchakan on Friday, they seemed pleased at the level of cooperation on all sides &#8212; the police, the U.S. military and the Afghan citizenry.

The men gathered the information and then asked about Taliban movements in the area.

The head elder, a tall man with a graying beard named Delwar (many Afghans have only one name), said through an interpreter, &#8220;There are not any Taliban here. But if they did come, for example, we would tell them not to bother us and would report it to the police and Americans. They are here to help us.&#8221;

After Abchakan, the Afghan-U.S. convoy traveled 45 minutes to another village named Spise, which rests at nearly 8,000 feet at the base of several mountain peaks and cannot be found on even moderately detailed maps.

The vehicles snaked through tricky, narrow roads to get there, with some having to stay behind at the pass for fear of being too wide and top-heavy to negotiate the mountain roads.

It was basically the same story, with local villagers intrigued and opening their snowed-in doors to the police and soldiers. They brought tea to the men, a customary greeting most Afghans adhere to without fail.

After documenting the usual answers to the assessment questions, the U.S. soldiers asked about heroin smuggling in the area. Based on their own human intelligence, they had reason to believe that there might be illegal drug activity in the area.

But the villagers said they did not know anything about it, nor did they report having any trouble with Taliban activity.

Only one well, installed three months before by the national government, serves the village of roughly 400 homes, said 50-year-old Malik Gon, a freelance laborer. Each home is estimated by village elders to support five to 10 people.

&#8220;This is our life &#8212; we have no electricity and little land to grow food,&#8221; the father of 11 children told the troops, pointing to the mountain sides that surround his home, leaving little land suitable for farming.

On Friday, the MPs entered another village called Baboos, where children ran out to greet the troops.

Again Ortiz, who is with the Arizona National Guard, was impressed with how the Afghan police engaged the residents.