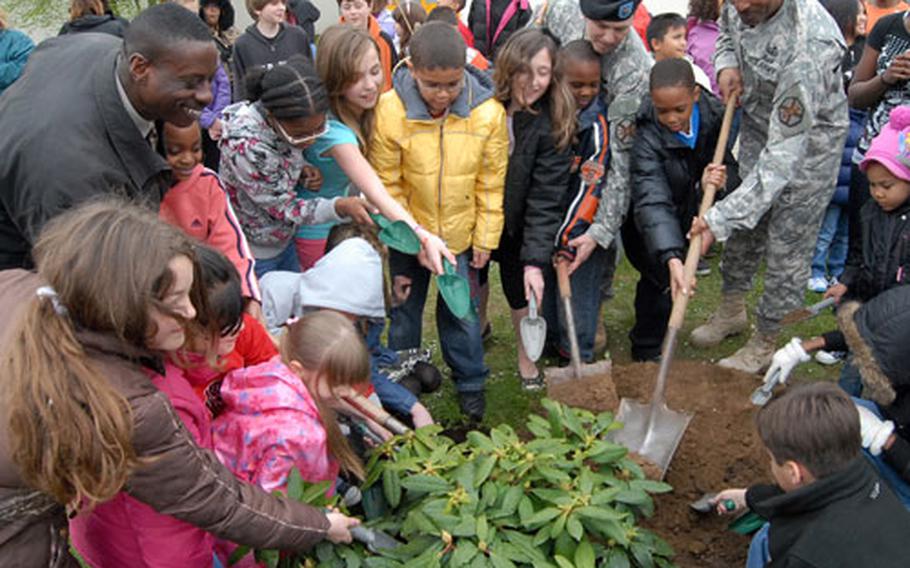 Darmstadt Elementary/Middle School students plant a rhododendron for Earth Day, with the help of principal Joseph Malloy, left, garrison commander Lt. Col. David Astin and Command Sgt. Maj. Harold Littlejohn, in front of the school on Tuesday. It is the final Earth Day celebration at the school that is closing at the end of the academic year. (Michael Abrams / S&S)

Sailors spent time Tuesday &#8212; Earth Day &#8212; ridding both the Capodichino and support site base in Naples, Italy, of trash.

&#8220;This base to me is beautiful and I want to help keep it beautiful, and to do that, we need to keep it clean,&#8221; Petty Officer 2nd Class Jason Pruitt, a master- at-arms, said as he plopped litter from Capodichino in a plastic bag. &#8220;Italy is such a beautiful place, but one of the first things people notice when they come (to Naples) is the garbage.&#8221;

The sailors&#8217; efforts might have been more beneficial had they been able to take their clean-up efforts outside the Navy&#8217;s gated base &#8212; where it&#8217;s desperately needed.

U.S. Navy officials in Italy said they met with Naples governmental officials to get permission to clean some of the Neapolitan streets surrounding the Navy bases. Italian officials reportedly declined the Navy&#8217;s offer because they felt the attention of having Americans clean Italian streets might prove embarrassing for the local government.

In the Benelux, the U.S. Army observed Earth Day in a variety of ways. U.S. Army Garrison Schinnen in the Netherlands, for example, reopened its Eco Park after a six-month upgrade. Activities included a nature hike around the Schinnen pond and demonstrations on recycling, fire prevention and energy awareness.

And purely by coincidence, military officials in Chi&#232;vres, Belgium, are spending the week evaluating community environmental programs, from asbestos removal to the handling of waste water.

Although the Navy&#8217;s Earth Day events in Naples were confined to the installations, it hosted a variety of activities at an Earth Day celebration on the Navy Support Site in Gricignano. The event included displays about environmental conservation and recycling, along with student art demonstrations and a fun run and walk-a-thon.

Officials said the events were designed to increase community awareness and provide information on protecting the environment.

&#8220;It is important to participate in environmental stewardship because everyone takes something from the environment each day,&#8221; said Lt. j.g. Alisa Beaubien, Naval Support Activity Naples Earth Day coordinator. &#8220;We are all responsible for the environment, since it is the basis of our everyday life.&#8221;

Stars and Stripes reporter Kevin Dougherty contributed to this report.