In lieu of a complete armored Humvee, the Army provides armoring kits like this one. The kit, however, does not armor the floor or bulletproof the windshield — crucial for protecting troops from roadside bomb blasts and gunshots. (Marni McEntee / S&S)

In lieu of a complete armored Humvee, the Army provides armoring kits like this one. The kit, however, does not armor the floor or bulletproof the windshield — crucial for protecting troops from roadside bomb blasts and gunshots. (Marni McEntee / S&S) 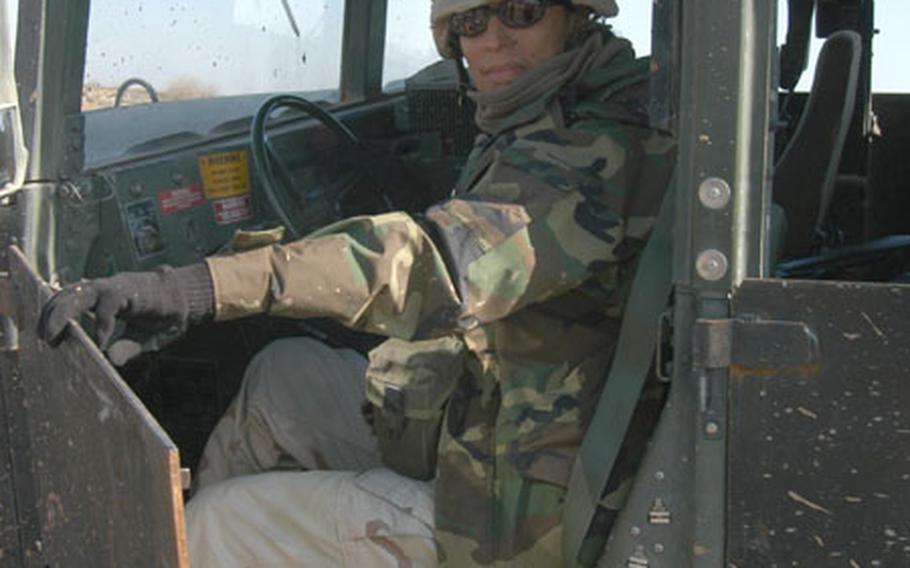 LOGISTICS SUPPORT AREA ANACONDA, IRAQ &#8212; While the Army plans to ship more armored Humvees into Iraq, many troops are upgrading their soft-sided Humvees on the cheap while they wait for replacements.

Conventional Humvees were not designed to face some of the most insidious threats in the Iraq combat zone. Roadside bombs have killed more than 80 soldiers since the war began last March. Hundreds of other troops have been killed when explosive devices were tossed into their vehicles or they were ambushed.

Army officials said last week that up to 220 armored Humvees a month will be produced in a new factory in the United States by this spring. In addition, 6,000 kits for armoring standard Humvees and other military vehicles also are being sent to the region. The cost for the new vehicles and upgrade kits is roughly $177 million.

In the meantime, some soldiers are turning to local metal shops to upgrade their conventional Humvees as best they can.

That&#8217;s what soldiers from the 223rd Military Intelligence Battalion did. The battalion, a California National Guard unit, brought 13 vehicles into Iraq, including 12 unarmored Humvees, when they arrived in March 2003.

They since have hired Iraqis to install makeshift armor on all their vehicles. At $2,000 apiece, each vehicle&#8217;s floorboard and cargo areas were lined with steel. Steel doors were added, along with steel enclosures for the gunners on gun trucks. Sandbags on the floor and crossed fingers do the rest.

So far, none of the unit&#8217;s 113 soldiers has been seriously injured or killed while patrolling an area from LSA Anaconda, about 50 miles north of Baghdad, north to Kirkuk.

The improvised armor has its drawbacks. On one recent trip to Iraqi villages near LSA Anaconda, Berber-Giddings had to repeatedly check the loose-fitting latches on her door to keep it from swinging open while she drove.

When the rear driver&#8217;s side door of the vehicle kept flying open, Berber-Giddings tied a string across the loose-fitting latch to keep it closed. Some soldiers put an extra-long string on the door latch so they can hold the door closed while they&#8217;re speeding down the road.

The Army has frowned upon such improvised armor, warning that the untested steel may shatter when hit by a projectile such as a rocket. That could send hot shrapnel into the passengers.

The Army recently ordered an Alabama National Guard unit to remove the improvised armor it placed on its vehicles before the unit deploys to Iraq, according to news reports. It said the unit would be provided with official Army armoring kits.

Ryan, the 223rd commander, admits the jerry-rigged upgrades leave much to be desired, but he said felt he had no choice.

The unit also has installed the official Army armor upgrade on five of its vehicles. The Army kit armors the soft sides of the Humvee and adds a bulletproof windshield.

It doesn&#8217;t, however, provide armor for the vehicle bed, which still leaves it vulnerable to the roadside bombs popular with Iraqi insurgents.