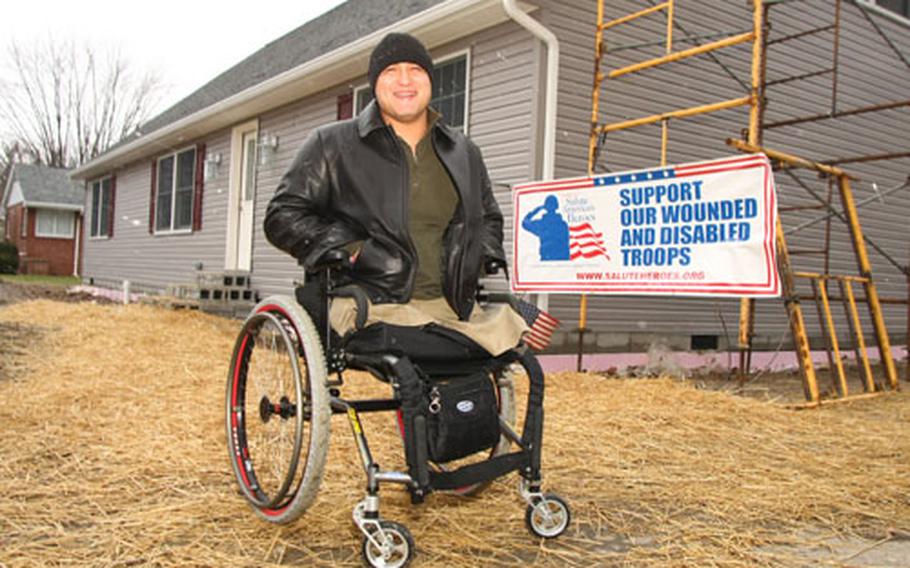 And after everything the 22-year-old Army infantryman had been through, beginning with the roadside bomb in Ramadi, Iraq, on Sept. 30, 2006, that took both his legs, it seemed like such a simple wish.

But Cindy had to steel herself to tell her son a brutal truth: he didn&#8217;t have a bed anymore.

City inspectors in Fostoria, Ohio, had condemned the one-story ranch house at 1754 North Union St., along with most of its contents, after an undetected water leak led to a deadly black mold infestation.

Under normal circumstances, Cindy, 50, an emergency room nurse, would have found the leak long before matters grew so serious.

But Cindy had not left Shane&#8217;s side since flying to Germany on Oct. 2, 2006, where she rushed to Landstuhl Regional Medical Center to see her wounded son for the first time.

After seven years of trying in vain to start a family, Cindy and her husband, William &#8220;Rick&#8221; Parsons had pretty much conceded defeat.

In 1984 Rick was diagnosed with an inoperable brain tumor. Doctors measured his remaining lifespan in weeks; months if he was lucky. Just as the couple was trying to absorb that blow, Cindy found herself pregnant.

No one thought Rick would live to see the birth of his son, Cindy said. But he proved them wrong. Not only did he hold his newborn son on Aug. 3, 1985, it wasn&#8217;t until Shane was six months old that his father finally succumbed to cancer.

After Rick died, Cindy rented a house for a couple years to save up for a down payment for a house, so Shane would have &#8220;a stable place to grow up.&#8221;

She finally selected an $80,000 one-story, three-bedroom ranch house with a cement foundation because it was close to a good elementary school.

Just as it is for so many single, working mothers, money was always a bit tight for the Parsons, Cindy said. There was always something that needed fixing or replacing around the house: the roof, the furnace, the hot-water heater. Cindy went back to the bank to re-finance her investment repeatedly. But they got by, she said.

So for Shane, the ranch house in Fostoria was the only home he ever knew.

Shane enlisted in the Army in August, 2004, and was stationed at Fort Hood, Texas, in the 3rd Battalion, 67th Regiment, part of the 4th Brigade Combat Team, 4th Infantry Division,. Shane&#8217;s unit deployed to Ramadi, Iraq in Dec. 2005.

The callThe phone call that would change her life forever came on Saturday morning, when Shane always tried to call home.

Cindy, who hadjust finished showering after her 12-hour night shift at the hospital, happily raced to the kitchen to answer the phone. She couldn&#39;t wait to talk to her baby boy.

But it was not her son. And the stranger had news to stop a mother&#8217;s heart.

Shane had been driving the lead Humvee during a platoon patrol when it was hit by an explosively formed penetrator, or EFP. He and the gunner were in critical condition.

&#8220;He said Shane had been involved in a situation where he was severely injured,&#8221; Cindy said, &#8220;and that he was at a [combat hospital] and they were working on him to do the best they could. They said he had lost his right leg, and a lot of blood, and they&#8217;d call as soon as they could with more information.

Cindy dropped to her knees, stunned with horror.

Fleeting images ran through her head of her athletic son &#8211; playing football, doing his karate, wrestling.

One thought, like a mantra, carried Cindy through the three days it took her to reach the bedside of her unconscious son.

Cindy spent months in Germany, relying on family to hold down the fort.

Too late to save houseBy the time the family checked on the house, around January 2007, the damage was done.

An all-out effort to make repairs and clean up the mold over the next several months failed.

By the end of the summer, the family had to face facts: the house was beyond saving.

When Shane found out what had happened to his childhood home, in August, his first emotion was rage, he told Stars and Stripes on Tuesday from BAMC, where he was preparing to undergo his fourth surgery on what remains of his left leg.

Known for his sweet nature, the traumatic brain injury Shane had suffered in Iraq had changed his personality, he said, leaving him with a &#8220;short temper.&#8221;

Just as the Parsons were contemplating a difficult 2008, the Coalition to Salute America&#8217;s Heroes (www.saluteheroes.org) stepped in, with a Christmas gift that was too big to wrap.

On Nov. 15, the Ossining, N.Y.-based charity organization announced that it would build the Parsons a $130,000 handicapped-accessible, two-story, five-bedroom house on the site of the destroyed home.

Cindy and Shane cut the ribbon on their partially constructed new house on Dec. 23, during a short break from Shane&#8217;s treatment.

For Shane, the house is a visible symbol of the bond he feels with the American people.