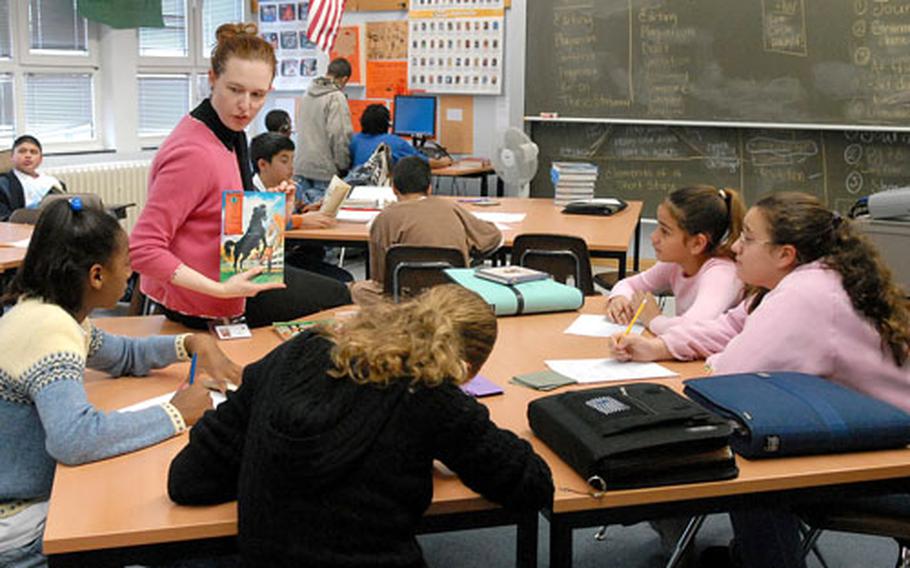 Teacher Liz Walters talks to students in her Darmstadt Middle School reading class about what to read next. DODDS-Europe announced Wednesday that the school will close at the end of the school year and be combined with the elementary school, making it a K-8 school. (Michael Abrams / S&S)

DARMSTADT, Germany &#8212; Troop reductions in Darmstadt have prompted school officials to merge the Darmstadt elementary and middle schools at the end of the school year, Department of Defense Dependents Schools-Europe officials announced Tuesday.

The merge will put children in kindergarten through eighth grades into the building that is now Darmstadt Elementary School. Darmstadt Middle School will close.

&#8220;We almost expected this is what would happen,&#8221; said Dan Lufkin, who teaches eighth-grade math and algebra, as well as AVID, a college prep course, at the middle school.

Rumors about a school merger have been floating around for at least four of the six years that Russ Claus has been principal of Darmstadt Elementary School, and Tuesday&#8217;s announcement was no surprise, he said.

Middle school teachers and educational staff, who will be considered excess after the school closes at the end of the year, now have a week to decide their own futures. All have been guaranteed jobs, said Gene Knudsen, an assistant superintendent for the district.

Some options available to them are staying within the Heidelberg School District, transferring somewhere else within the Department of Defense school system or taking early retirement.

But he&#8217;s not worried, and said he likes the options that have been presented.

DODDS-Europe closed at least eight schools last year, and all of the teachers at those schools were reassigned within the Department of Defense Education Activity, said David Ruderman, a DODDS spokesman.

That doesn&#8217;t mean that everyone was reassigned where they wanted to go. Ruderman said the system tries to get displaced teachers &#8220;as close geographically as they can to where they want to be.&#8221;

There are four employees at the school who fit this category. They will be able to reapply for jobs at the new merged school or elsewhere within the school system, she said.

Contract employees who work at the school for outside companies, such as the custodial staff, are also not covered by any of DODDS&#8217; transfer or retirement plans.

There are more than 700 pupils between the two schools, but only about 400 children are expected to enroll in the combined school next year, Claus said.

The precipitous drop is expected as units in the area shrink or inactivate. Earlier in the year, a military intelligence battalion and a signal company inactivated. The 22nd Signal Brigade, whose roughly 3,000 soldiers make it the largest unit in Darmstadt, is expected to inactivate early next year.

Administrators will discuss the plan with parents during a parent forum at 3:30 p.m. today in the Darmstadt Middle School gym.