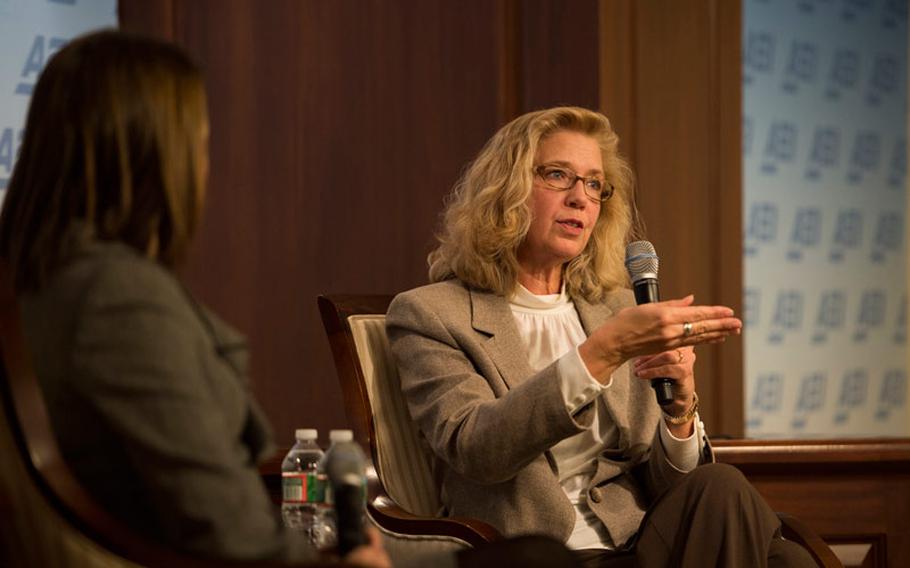 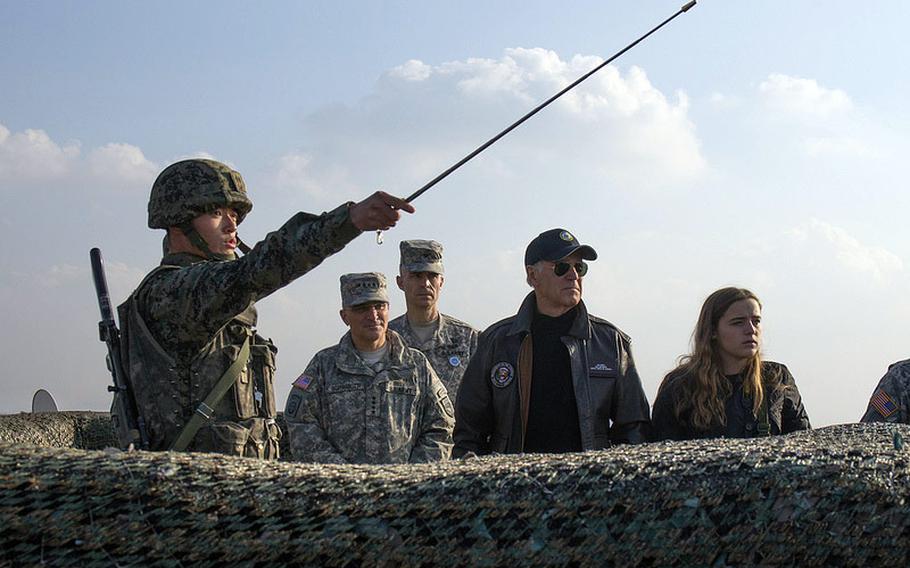 Vice President Joseph Biden receives a briefing and meets with U.S. and Republic of Korea soldiers during a visit to Observation Point Ouellette and Freedom House on Dec. 7, 2013. (Brian Gibbons/U.S. Army)

SEOUL — Sweeping proposed cuts to military spending and troop levels will not impact U.S. military operations in South Korea, and the U.S. military rebalance to the Asia-Pacific region will be preserved, a top U.S. defense official said Wednesday.

Fox said a proposal to shrink the number of Army personnel to between 444,000 and 450,000 would give U.S. Army Chief of Staff Gen. Raymond Odierno “enough flexibility to meet the requirements that any Korean contingency would require and sustain our commitment to the forces on the peninsula and protect the homeland and do something else.”

“But the smaller the force, the less else you can do. But…it’s not Korea. Korea is set and was an input,” she said.

The U.S. maintains a constant force presence of 28,500 on the Korean peninsula as a deterrent to North Korea, though the number of boots on the ground is higher because of the burgeoning use of rotational deployments.

Approximately 800 members of the 1st Battalion, 12th Cavalry Regiment from Fort Hood, Texas, are now in South Korea for a nine-month deployment. The 1-12 CAV brought with it about 40 M1-A2 Abrams tanks and 40 M2-A3 Bradleys, which will remain in Korea for follow-on rotations.

South Korean defense officials said this week that they were not worried about the impending budget cuts, citing previous assurances from the U.S. that sequestration would not affect U.S. Forces Korea troop levels or readiness.

Even though the Air Force announced Wednesday that it will reduce the number of troops at Misawa Air Base’s intelligence gathering units by 500 over the next 1½ years, Fox said the rebalance to the Asia-Pacific remains critical, citing Marine Corps deployments to Australia and trips to the region by top U.S. officials, including President Barack Obama, as examples of U.S. commitment to that rebalance.

She said that the budget and personnel cuts, although painful, were necessary and warned that “without far-sighted bipartisan action by the Congress, sequestration will return in FY 2016.”

That would cut defense spending by more than $50 billion per year through 2021, she said.

However, the Department of Defense budget plan announced this week would “help remedy some of the damage already caused by sequestration,” and provide $115 billion more over the next five years than sequestration funding, she said.