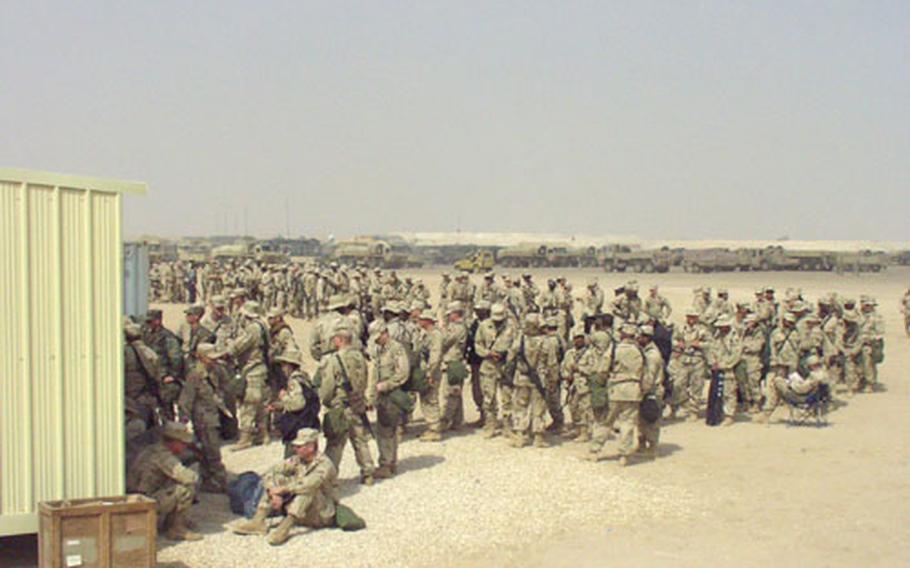 The population of Camp Udairi, Kuwait, has doubled in less than one month. When soldiers from V Corps&#39; 11th Aviation Regiment arrived in early February, they could walk into the base&#39;s trailer-sized PX without waiting. Now the line stretches 200 meters, and soldiers wait three or four hours for a chance to shop. (Steve Liewer / S&S)

The population of Camp Udairi, Kuwait, has doubled in less than one month. When soldiers from V Corps&#39; 11th Aviation Regiment arrived in early February, they could walk into the base&#39;s trailer-sized PX without waiting. Now the line stretches 200 meters, and soldiers wait three or four hours for a chance to shop. (Steve Liewer / S&S) 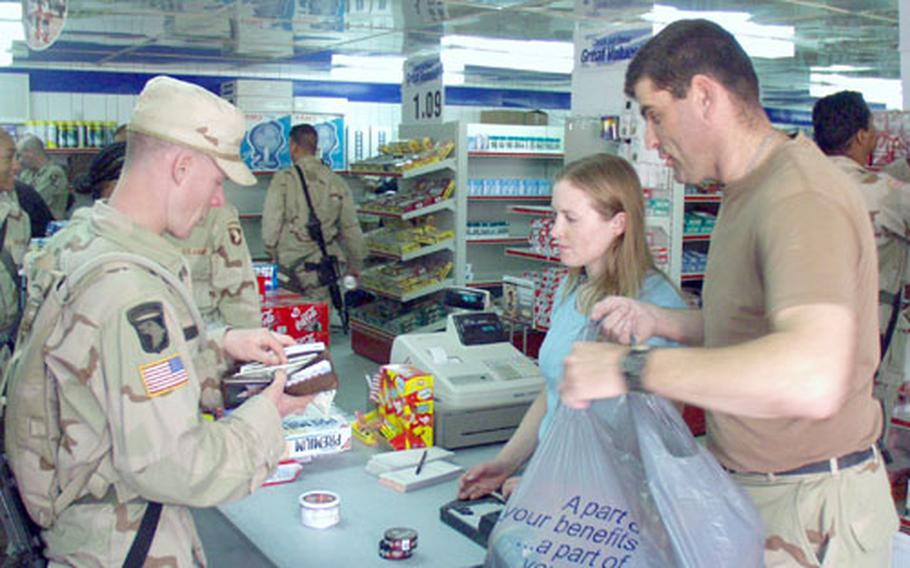 Staff Sgt. Preston Ring of the 8th Battalion, 101st Aviation Regiment purchases snacks and snuff from AAFES worker Susan Boykin, 23, while Sgt. Gary Slaughter, 37, of Morgantown, Ky. bags. Ring, 23, of Lake City, Fla., got in line at 6:45 a.m. and was rewarded by being one of the first soldier to enter Camp Udairi&#39;s small PX when it opened at 10 a.m. The AAFES store is only one of many facilities at the camp severely overcrowded since the unexpected arrival of the 101st Airborne Division late last week. (Steve Liewer / S&S)

CAMP UDAIRI, Kuwait &#8212; Pfc. Jose Gonzalez got up at the crack of dawn to grab some breakfast and climb in line for Camp Udairi&#8217;s sorely overstressed post exchange.

Five hours later he emerged, smiling, with a stash of toilet paper, Coke and a washtub.

Staff Sgt. Preston Ring of the 8th Battalion, 101st Aviation Regiment was one of the first in the queue at 6:45 a.m. &#8212; more than three hours before the trailer-sized AAFES store opened.

The nearly half-mile line outside the PX is only the most obvious sign that Camp Udairi&#8217;s slapped-together infrastructure is bulging from the huge influx of troops.

The first soldiers arrived only six weeks ago at a military post designed for 6,000. Now the force level has soared past 10,000, and busloads more arrive every day.

Since the arrival of the 101st Airborne Division late last week, soldiers have been jammed into tents. Their personal space has been squeezed to a couple of feet between cots.

The hot showers soldiers enjoyed a few weeks ago are just a pleasant memory. With twice as many troops now using them, there is almost always a line. The water is cold when the tanks aren&#8217;t completely dry.

Base cooks worked around the clock to serve hot meals after a fire destroyed the dining tents last weekend, and two meals a day are served out of field kitchens near the tent cities.

But the portions are much smaller than before, and sometimes the food runs out before everyone eats.

Soldiers had picked up snack and lunch items from the PX, but now almost no one, except the 101st Airborne troops, goes there. The 101st&#8217;s helicopters and vehicles haven&#8217;t arrived yet, so they have little work to do and plenty of time to stand in the long lines.

But the V Corps soldiers already encamped at Udairi have duty all day, and few can spend several hours in a queue.

AAFES manager Nancy Sweet said long lines are common in PXs at remote military posts. She recently extended the store&#8217;s daily hours from eight to 12, and she has ordered a third cash register to help speed purchases.

Another concern for soldiers has been with their mail.

The huge influx of troops quickly overwhelmed the 21 soldiers from the 129th Postal Company from Fort Bragg, N.C., who were sorting truckloads of mail each night at Camp Doha in Kuwait City.

Spc. Jesus Durand, 22, of Newark, N.J., the chief postal clerk at Camp Udairi, said the volume of mail and packages tripled in a month, to a peak of 1,600 bags a day. Each day, a convoy of trucks had to drive in from each camp to pick up mail.

Early last week, it was decided to move the sorting closer to the soldiers. Only Camps Udairi and New York could offer enough space, Durand said. Now the units at Udairi can pick up their mail close to home, and within a week there will be a full-service post office open daily.

With troops continuing to pour into the camp, there is little hope for improvement. The Army is constructing a seventh tent pad, and Nunez said a few more shower trailers are awaiting installation.

The only real change will come if war starts. Then many of the aviation troops will move forward behind the infantry to a new location.

Through it all, soldiers are griping surprisingly little.

They know that, if war breaks out, their living conditions might get a lot cruder.