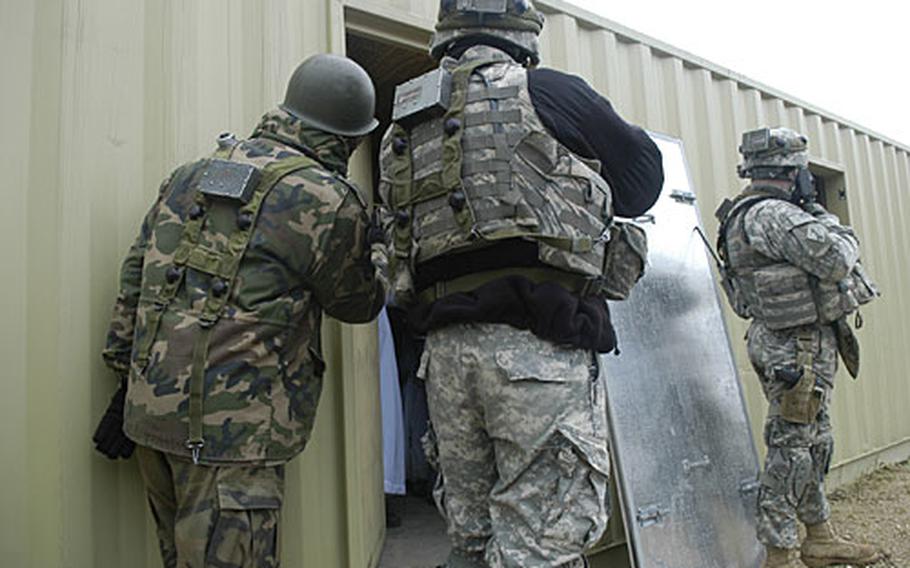 Soldiers clear a building to locate suspects and collect information during a mission rehearsal exercise in Hohenfels, Germany. The soldiers work to perform the difficult balancing act of achieving security and not upsetting peaceful civilians. (John Vandiver / S&S)

Soldiers clear a building to locate suspects and collect information during a mission rehearsal exercise in Hohenfels, Germany. The soldiers work to perform the difficult balancing act of achieving security and not upsetting peaceful civilians. (John Vandiver / S&S) First Lt. James Worth delivers a convoy brief to Troop G soldiers before departing for a mission 25 kilometers from the Joint Multinational Readiness Center in Hohenfels, Germany. The unit, part of the Baumholder-based 2nd Brigade, 1st Armored Division, is busy training for its upcoming deployment to Iraq. (John Vandiver / S&S)

HOHENFELS, Germany &#8212; The mission: A high-value target is hiding out in a remote town. A cache of weapons to be used against U.S. forces is located nearby.

The mobile Troop G, 1st Cavalry &#8212; the 2nd Brigade, 1st Armored Division&#8217;s reconnaissance unit &#8212; was on the hunt Wednesday during a mission rehearsal exercise operation that started in Hohenfels.

Unlike most of the exercises taking place this week at the Joint Multinational Readiness Center, Troop G ventured (via the autobahn) some 15&#189; miles to the small town of &#8220;Ash Sharget.&#8221;

As the unit of roughly 40 soldiers approached the town by convoy, there was an explosion.

The make-believe explosion caused one &#8220;nonlife-threatening injury&#8221; to a soldier in the lead vehicle. After that, the convoy pushed through to the town, where it was immediately welcomed with gunfire.

It was an action-packed afternoon, and the latest in a series of drills designed to sharpen the skills of 2nd Brigade Combat Team units as they gear up for an early 2008 deployment to Iraq. During the exercise, Troop G soldiers &#8220;killed&#8221; two enemies and captured three missiles. Two soldiers sustained &#8220;injuries,&#8221; but none was life-threatening.

Through the mission, radio communication was spotty, making it difficult for the unit to coordinate together.

&#8220;Dismounted communication got us. But other than that, things went well. We stopped the proliferation of these weapons today,&#8221; Sgt. Timothy Butler said.

The mission was coordinated by the 2nd Battalion, 6th Infantry, which monitored the exercise from the JMRC&#8217;s &#8220;Forward Operating Base East.&#8221; The day before, battalion planners worked up a plan based on intelligence that terrorists and a weapons cache were in the area.

The Troop G soldiers searched a school, cafe and town buildings as they hunted for suspects and asked locals for information.

Capt. John Paul Hart, Troop G commander, talked with one of the locals who said he had information to share, but also wanted some help getting drinkable water in the town. In the meantime, soldiers were uncovering the cache after a lengthy search through the woods.

After finding the &#8220;missiles,&#8221; soldiers continued to hunt for their main suspect.

&#8220;We killed one enemy, possibly a second dismounted in the woods,&#8221; 1st Lt. Jake Worth said into his radio after emerging from the woods.

As for the high-value target, it turned out that he departed the area before the unit arrived.

So, with weapons in tow, G Troop set out for home.

The unit got high marks for its performance during a post-operation briefing. No casualties and the cache was seized.

Hart said the unit has been making steady progress.