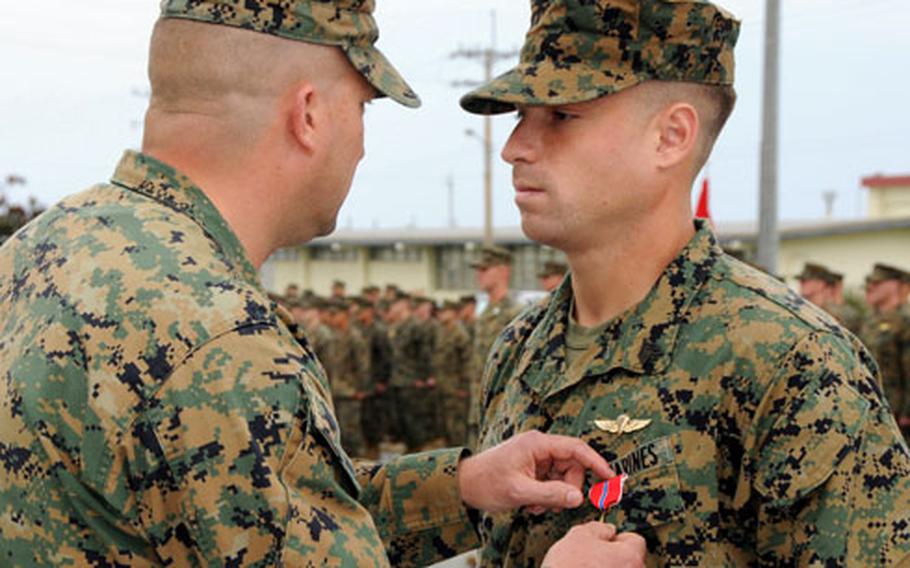 Capt. Luke Lazzo, 27, from Rochester, Mich., commander of 1st Platoon, Company A, 3rd Reconnaissance Battalion, salutes after receiving a Bronze Star with V device during a ceremony on Wednesday at Camp Schwab, Okinawa. ()

CAMP SCHWAB, Okinawa &#8212; Although Iraq is much quieter these days for U.S. troops, danger still lurks.

Just ask some of the Marines of 3rd Reconnaissance Battalion. The Okinawa-based troops returned here last month after a seven-month deployment in Anbar province, where they patrolled booby-trapped areas and engaged in firefights.

Last week, their battalion commander pinned combat decorations on the chests of three of those Marines.

Spencer&#8217;s heroes told the stories behind the medals.

On July 10, Redmund, then a corporal, was part of a five-man team on a night patrol conducting "recon and surveillance in places unnamed" in Anbar province, he said.

The team was headed for a clandestine observation post, and 22-year-old Redmund was the point man when radioman Cpl. Justin Hullett stepped on a hidden trip wire attached to a land mine, setting off a loud explosion.

"I can see a cloud of white smoke" and shrapnel flying everywhere, assistant team leader Cpl. Tyler Van Hook said when he described the scene to Stars and Stripes in a July interview in Iraq.

Redmund recalled just feeling "a bee sting in the back of my legs and &#8230; a very loud noise."

At first, he thought insurgents had thrown a grenade.

"The adrenaline rush is so much that you really don&#8217;t feel stuff," Redmund said, explaining how didn&#8217;t feel pain from the jagged shrapnel pieces that tore through his legs.

He quickly applied tourniquets to both his legs. When he heard cries for help, he moved to his buddies.

Redmund recounted going to Hullett and finding wire wrapped around his legs.

"I screamed to the team we were in a minefield," Redmund said.

Van Hook, farthest from the mine and the only one uninjured, recalled that Redmund "was pretty shaken up."

But Redmund was able to shake off his disorientation and tend to the many entrance and exit wounds on Hullett&#8217;s legs and the shrapnel in his hips. He also tended to team leader Sgt. Darren Dugan&#8217;s wounds in the thigh and heel. And Van Hook took care of the team&#8217;s reconnaissance scout, Cpl. John Rice, who had an exposed bone fracture and shrapnel wounds on both legs.

There was "a lot of screaming back and forth and hollering instructions" Redmund said.

Redmund said he first noticed the effect of his own wounds when he tried to carry Hullett.

"I fell down and realized I was hurt," Redmund said.

Redmund later learned that a ball bearing had punctured one leg about "half a centimeter from the femoral artery and out through the left calf," he said.

Despite his own wounds, Redmund got up and managed to navigate through the minefield with Hullett. With everyone removed from immediate danger, he and Van Hook waited for the additional medical help and helicopter evacuation.

Petty Officer 2nd Class Toran Jacobsen, a 3rd Recon corpsman, was one of the first at the scene.

He told Stripes during a July interview in Iraq that by the time he got there he "was just overwhelmed at how much the guys had done."

He credits Redmund and Van Hook with saving the other three Marines&#8217; lives.

The first 10 days of August were chaotic, said Lazzo, 27, commander of 1st Platoon, Company A.

His platoon was living out of trucks as they conducted counterinsurgency operations.

"It all culminated on the 10th," Lazzo said.

"It was a nice sunny day," recalled Callum, a team leader.

The platoon was conducting door-to-door searches of abandoned houses in a town north of Baghdad in the Al Jazeria Desert when they "found one with insurgents," Lazzo said.

As they exited the building during the firefight, Lazzo realized one Marine was still in there. So were the insurgents.

"All my thoughts were on getting him out as fast as we could," Lazzo said.

Lazzo and Callum&#8217;s citations recount how both exposed themselves to the enemy to bring the Marine to safety.

"Everybody out there was exposed to enemy fire, just trying to get the job done and defeat the enemy," Callum said.

He exposed himself to enemy fire several times as he moved from a covered position to better engage the insurgents. At one point, "an enemy fragmentation grenade detonated several meters from his position, knocking him off his feet" but leaving him unharmed, according to his citation. He also used his own body to shield fellow Marines from a second grenade blast.

Lazzo, too, faced "hand grenade and small arms fire" as he led his troops to get a wounded Marine from the building, according to Lazzo&#8217;s citation.

Lazzo and Callum insist any success was due to the whole platoon.

It&#8217;s a testament to the caliber of his men that they all "thought about others before ourselves," Lazzo said.

"Without him leading the way, all of this you heard today wouldn&#8217;t have been possible," Lazzo said. "It was a travesty to loose him, but he was killed doing what he chose to do, and his actions helped save lives."

Said Callum, pointing to the Bronze Star he received for his actions, "I&#8217;d rather give this back and every other award [received by the platoon] to have Ferschke back."