Trilateral missile-defense drills wrap up in waters off Japan 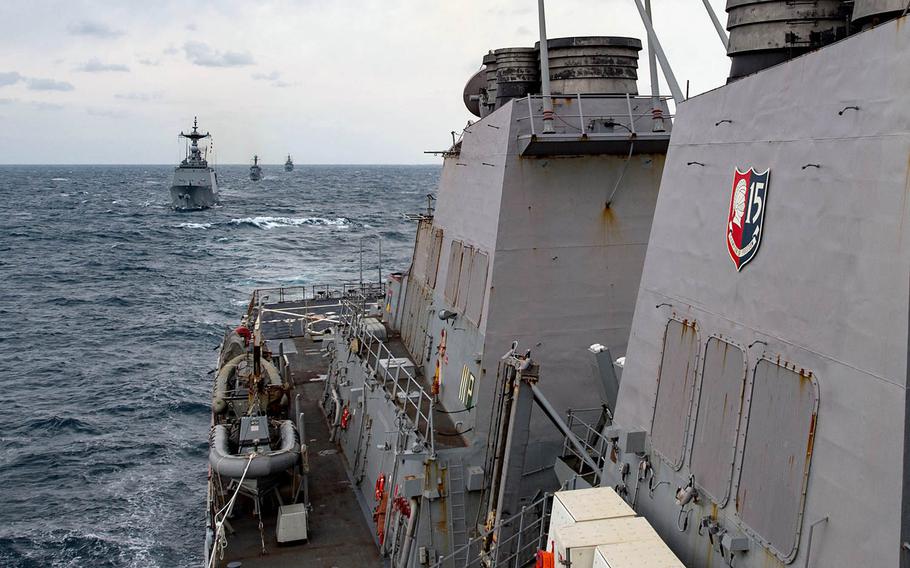 The Navy said the maneuvers, which involved the destroyers USS Stethem and USS Milius, “enhance tactical capabilities” and “increase self-defense and situational awareness.”

The Milius, part of the Navy’s 3rd Fleet, was scheduled to forward-deploy to Japan last summer; however, that’s been pushed back until sometime next year while the ship is upgraded with the Aegis Baseline 9 combat system, the Navy said. The system will boost the ship’s air-defense, missile-defense, surface-warfare and undersea-warfare capabilities.

A string of mishaps and collisions this year involving Navy ships in the region have raised questions about the 7th Fleet’s readiness to defend against North Korean missiles.

Fatal collisions in the Pacific over the past several months killed 17 sailors and severely damaged the destroyers USS Fitzgerald and USS John S. McCain. Each ship has an Aegis Ballistic Missile Defense system that would allow it to intercept short-and intermediate-range missiles.

Questions also remain over whether other 7th Fleet ships are properly trained to defend against missiles. A Government Accountability Office report from September said as of June, 37 percent of warfare certifications had expired for Japan-based cruiser and destroyer crews – a fivefold increase in expirations in two years.

CNN reported last month that the Fitzgerald had expired certifications for the following training areas: air warfare, ballistic missile defense, electronic warfare, fire support, cruise missiles and more. The report said the McCain had a better training record but was overdue on most of its training certifications.

A 2015 GAO report found that 7th Fleet ships based in Japan had such aggressive deployment timetables that they did not have dedicated training periods.

“We’ve conducted additional assessments to make sure they’re ready for operations,” he said. “Right now USS Stethem and USS Benfold are the two BMD ships currently operating. These ships wouldn’t be deployed unless we were confident in their readiness.”