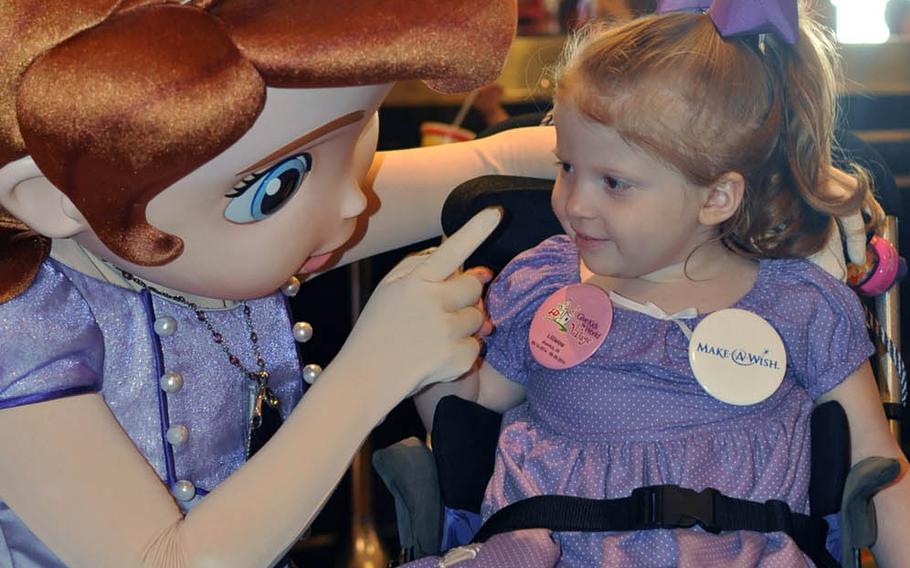 Lillianna Shull with her favorite Disney Princess, Princess Sofia the First, on her Make A Wish trip to Disney World in Orlando, Florida in May 2014. Lilli was seven when she died on Feb. 20. (Photo courtesy of Shull family)

Lillianna Shull with her favorite Disney Princess, Princess Sofia the First, on her Make A Wish trip to Disney World in Orlando, Florida in May 2014. Lilli was seven when she died on Feb. 20. (Photo courtesy of Shull family) 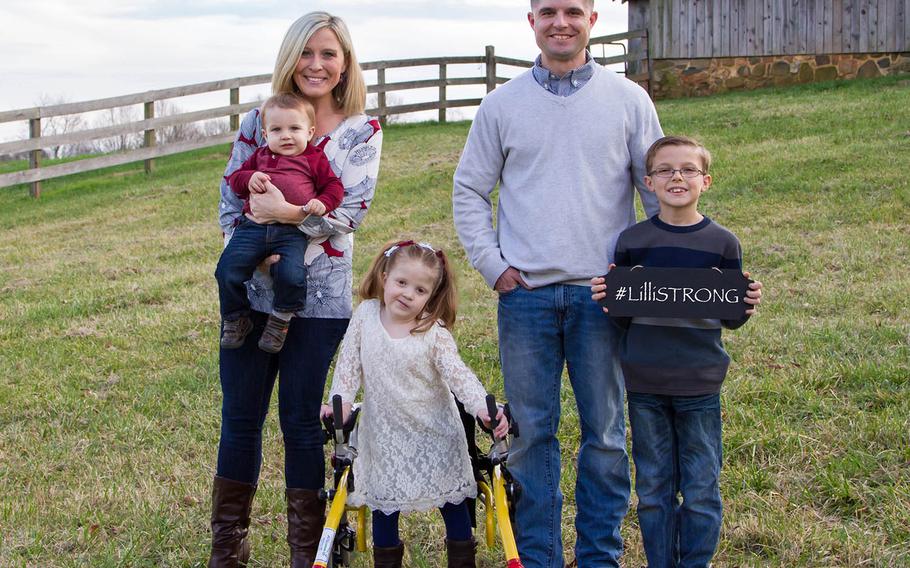 Lillianna Shull, 6, stands in front of her wheelchair for a family photo in December 2015. From left, Jen Shull holding youngest sibling Luke, 1, Maj. Michael Shull and eldest sibling Jake, who was 8. Lilli died of complications from brain cancer in February. (Photo by Kristina Attwood Photog) 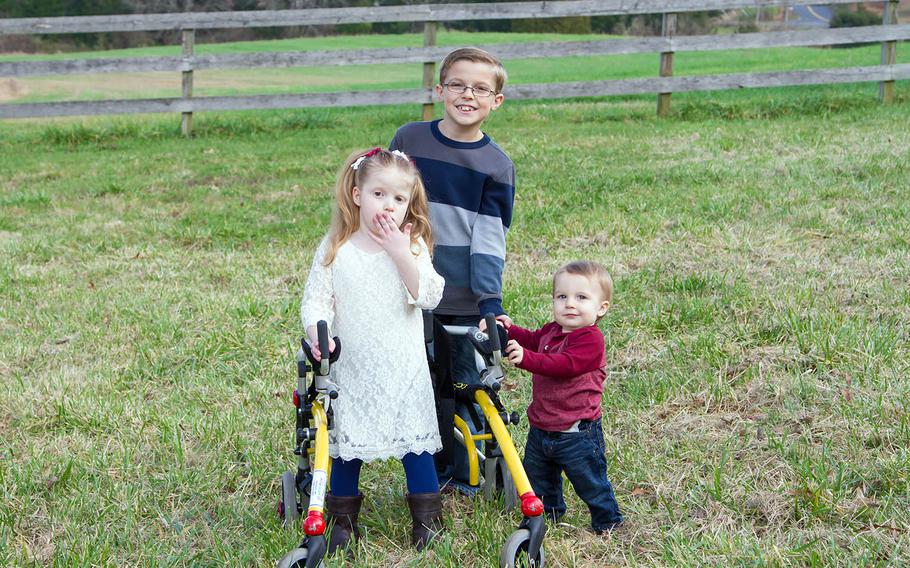 Lillianna Shull, 6, stands in front of her wheelchair for a photo with siblings Jake, 8 and Luke, 1, in December 2015. Lilli, who had brain cancer, died on Feb. 20. (Kristina Attwood Photography) 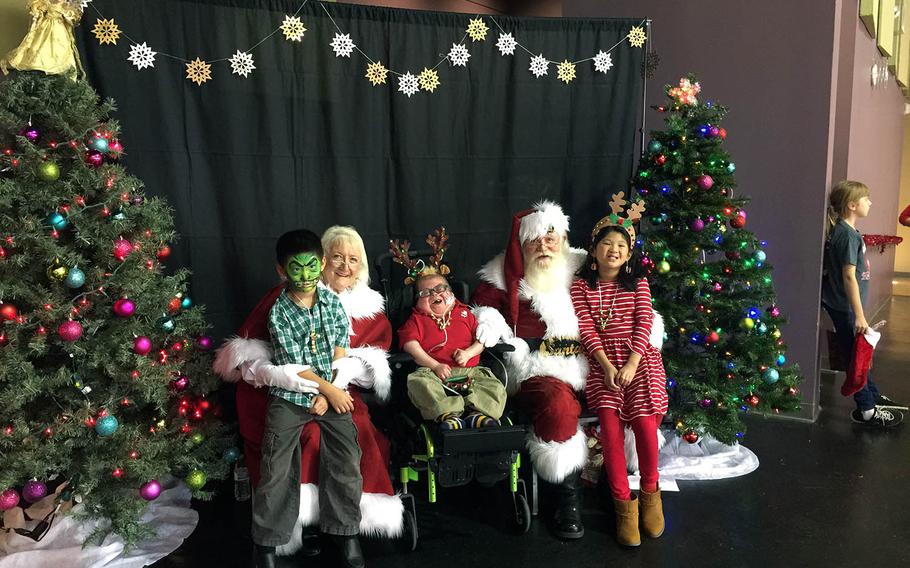 Nathan Tarwater, now 17, visits Santa and Mrs. Claus in December 2016 with his sister Addison, left, his brother Caden, left and his sister Addison, right at Morgan's Wonderland theme park in San Antonio. Nathan, who was born with a rare choromosome disorder that renders him medically fragile, has defied doctors predictions that he would not survive to his first birthday. (Courtesy of Adreanna Tarwa) 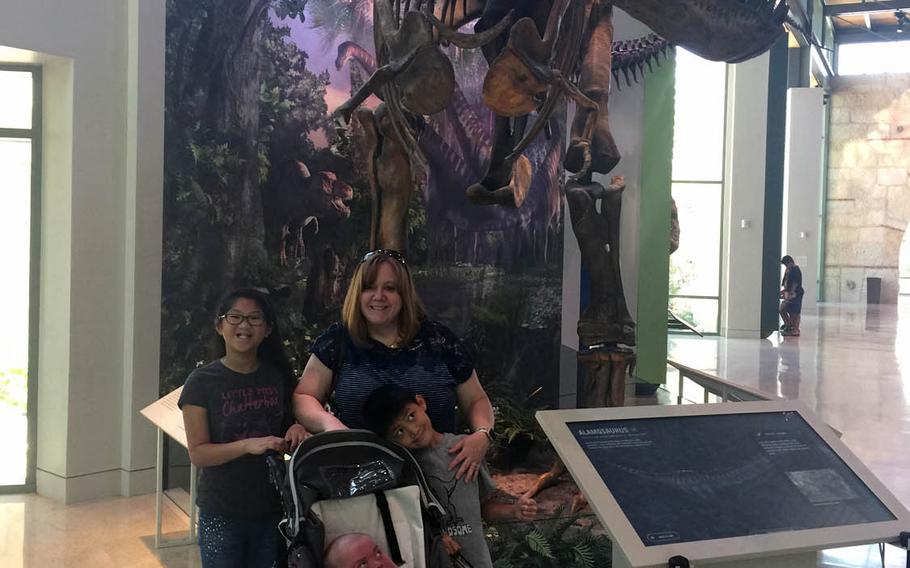 Nathan Tarwater, 17, visits his favorite dinosaur exhibit with his sister Addison, 11, left, his mother Adreanna and his younger brother Caden, 7, on May 14, 2017 at the Witte Museum in San Antonio, TX. Nathan, who was born with a rare choromosome disorder that renders him medically fragile, has defied doctors predictions that he would not survive to his first birthday. (Courtesy of Adreanna Tarwa)

The rule is usually discovered by parents bracing for their child to die.

Tricare does not cover curative treatments and hospice care at the same time. So, when forced to decide, military parents mostly forgo hospice. Because kids &#8212; even at their sickest &#8212; can rally.

&#8220;What do I choose &#8212; the spiritual (help) and counseling and the extra doctors and nurses who are qualified for dying, or the nurses qualified to give medical care?&#8221; said Adreanna Tarwater.

Five years ago, she and her husband, Bob, now retired from the Air Force, faced that decision when their son, Nathan, who was 12 and suffers from a rare chromosome disorder, was in a critical state with full-time nursing care.

Advocates of military children have been struggling behind the scenes to get the hospice rules changed. Military officials acknowledge the &#8220;gap&#8221; in coverage. With hundreds affected each year, advocates in the coalition Tricare for Kids say the fix is long overdue.

For years, hospice care was considered only after all efforts at treatment had been exhausted. But experts say the trend &#8212; even with adults &#8212; is now to incorporate hospice care into treatment for the illness. It helps families adjust to the reality and grief, while helping the patient manage pain and suffering.

The need for both is even more critical for families of sick children, said Ann Armstrong-Dailey, founder and director of Children&#8217;s Hospice International, which has been recommending holistic curative and hospice children&#8217;s care for decades.

Tricare by law must follow Medicare rules, which are usually geared toward people age 65 and older, said Capt. Ed Simmer, chief clinical officer for Tricare at the Defense Health Agency.

Simmer said that Medicare&#8217;s hospice policy makes more sense for the elderly, whose end-of-life trajectory can be somewhat predictable. Children&#8217;s illnesses are far less so &#8212; and kids can be in and out of hospice care numerous times over years.

&#8220;We certainly recognize that is not always an ideal situation because sometimes children can make remarkable discoveries and sometimes there&#8217;s a situation where a child can go one way or the other very quickly,&#8221; he said. &#8220;Certainly, providing hospice care leading up to that point, preparing both the child and the family &#8230; is very important.&#8221;

Simmer said the Defense Health Agency is looking for a long-term solution &#8212; possibly a &#8220;demonstration project&#8221; that would give Tricare a way to go around the current law to give families the treatments and services they need before any legislative change can be made.

After being approached by Tricare for Kids, Senate Armed Services Committee staff members have said they would examine a change in legislation. A spokeswoman said in early June that a legislative fix would be required, but it was too early to discuss the issue.

Ruedisueli and others say the Defense Health Agency needs to do more.

Michael and Jen Shull didn&#8217;t know they had made such a drastic choice.

Lillianna, their 7-year-old, had just come home from the hospital in December after nearly dying from acute respiratory distress syndrome. Doctors had intubated her and induced medical paralysis to keep her muscles from atrophying.

Lillianna had been battling brain cancer since she was 2, when doctors removed one of two large tumors. Under chemotherapy, the tumor shrunk. She held steady until the cancer recurred in November 2015. After a yearlong fight involving a failed drug trial, seizures and more chemotherapy, she caught a cold that turned into pneumonia and then sepsis.

She remained in the hospital for six weeks &#8212; much of it intubated, on paralytics and off chemo &#8212; before she was able to breathe on her own. She went home shortly before Christmas, so weak she was barely able to move her arms and legs, and with sodium levels that spiked to dangerous levels.

The interruption of chemotherapy allowed her cancer to grow. Doctors at Children&#8217;s National Medical Center in Washington started her back on half doses &#8212; the most she could tolerate. The hospital did not respond to several requests for interviews.

Her doctors recommended hospice to help deal with her many complications. Lilli would get a nurse who would come to their home to take her sodium levels rather than her parents having to carry her to a clinic for daily blood tests.

&#8220;We relied on hospice mostly for blood draws, but knowing that if something happened in the middle of the night we could just call, was a reassurance,&#8221; her mother said.

But she and Michael, a major in the Marine Corps, didn&#8217;t realize that choosing hospice meant that Lilli could not receive occupational therapy once she was strong enough. Or that chemo was being covered by Virginia Medicaid and she was not eligible for that under Tricare unless the couple revoked hospice care. Once hospice was revoked, Tricare would not allow them to re-enroll until the next service period, which could be up to 90 days.

In mid-January, the night before Lilli was to have an MRI, the hospital called to say that Tricare wouldn&#8217;t cover the cost if she had hospice care.

For the Shulls, that was a decider. An MRI that would take weeks to reschedule was necessary to see whether Lilli&#8217;s cancer was still aggressively spreading. That same night, they asked the hospice nurse to come over with discharge documents, and Children&#8217;s Hospital sent the paperwork to Tricare first thing the next morning.

Lilli resumed occupational and other therapies, got stronger and was able to handle full-dose chemo. She was sitting up and giving her parents hugs. But in mid-February, she developed diarrhea and her oxygen levels dropped. Her parents drove her to Children&#8217;s Hospital but Lilli slipped into a coma and died.

Her parents couldn&#8217;t help but wonder whether Lilli might have had a better chance if there had been a hospice nurse on call that day &#8212; or if she had been stronger. If maybe, those extra weeks of occupational therapy could have given her a chance at survival.

In 2007, the Military Health System conducted an analysis on &#8220;Care for Children with Life-Threatening Conditions.&#8221;

The report found that about 4,000 children facing life-threatening illness were eligible for military health care, while 400 a year died. But while costs to care for these children were rapidly rising, the report said that a government cost estimate of a &#8220;comprehensive palliative and hospice program for children&#8221; &#8212; a model followed by Medicaid, the Institute of Medicine and others &#8212; indicated cost savings within a few years of implementation.

It also called out the Military Health System for not following the recommendation of the Institute of Medicine for all insurers to &#8220;restructure&#8221; hospice benefits for children and &#8220;drop rules requiring children to forgo curative or life-prolonging care&#8221; while in hospice.

It has not changed in 10 years.

A letter was sent in late May by 20 members of the House of Representatives urging changes to Tricare, including the hospice issue. The coalition is also working directly with the Defense Health Agency.

Armstrong-Dailey said Simmer, now the clinical director for the Tricare Health Program, has been consulting with her organization, which has conducted demonstrations in five states, compiling data that she says prove concurrent holistic care from early in the illness saves money for the federal government and insurance companies.

Simmer confirmed those efforts. He said he has been working with Children&#8217;s Hospice International and commercial insurers to see how they address the issue.

Nathan Tarwater defied the odds again and again. He wasn&#8217;t supposed to live more than six months, the doctors said when, at 6 weeks old, he was diagnosed with a rare chromosome disorder.

Nathan is nonverbal, immobile and fed with a tube. His parents raised him for many years with at-home nursing care and therapies paid for by Medicaid and Tricare.

At the time, Nathan&#8217;s father was a young airman in the Air Force, and Tricare offered more than 10 hours a day of home nursing. The Tarwaters locked in that level of care.

Five years ago, Nathan got very sick. He was retaining fluid and having difficulty breathing. He was diagnosed with congenital heart defects, and once again, doctors told his parents the end was near.

Caring for Nathan was a full-time job. With a husband on active duty and two other small children, Adreanna wondered how she would cope without the full-time nursing.

In the end, they made the only choice they could. They turned down hospice.

The choice adds another layer to already unbearable grief, said Armstrong-Dailey. Instead of receiving long-term hospice care to help prepare them for their tragedy, parents carry an added burden.