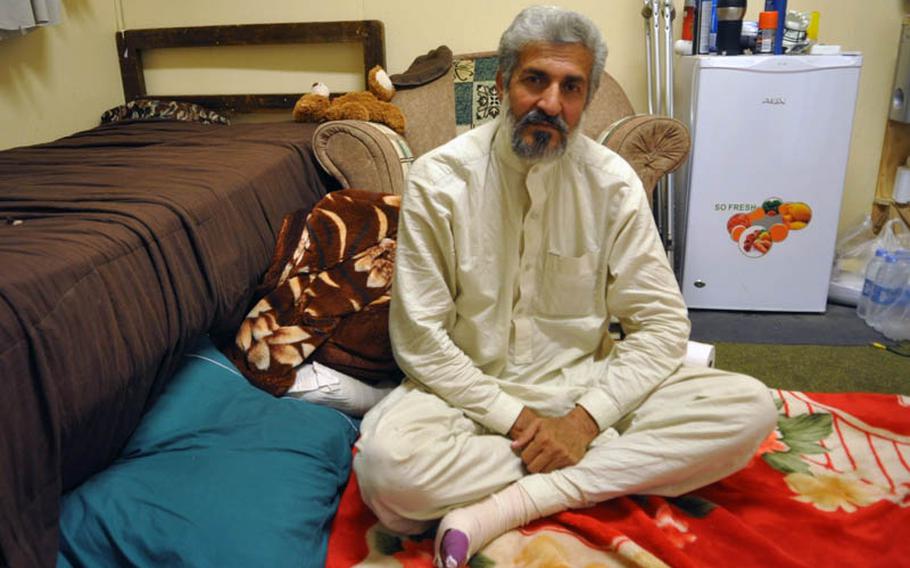 Musafir Khan Qayumzai, the governor of Ghaziabad district in Kunar province, spent time at Forward Operating Base Bostick in eastern Afghanistan to recover from a gunshot wound to his foot after regaining his freedom from kidnappers who had abducted him last week. (Martin Kuz/Stars and Stripes)

Musafir Khan Qayumzai, the governor of Ghaziabad district in Kunar province, spent time at Forward Operating Base Bostick in eastern Afghanistan to recover from a gunshot wound to his foot after regaining his freedom from kidnappers who had abducted him last week. (Martin Kuz/Stars and Stripes) Lt. Col. Dan Wilson, commander of Task Force No Fear based at Forward Operating Base Bostick in eastern Afghanistan, bids farewell on Friday to Musafir Khan Qayumzai, the governor of Ghaziabad district in Kunar province, who spent time at the base to recover from a gunshot wound after regaining his freedom from kidnappers last week. (Martin Kuz/Stars and Stripes)

NARAI, Afghanistan &mdash; The kidnappers made a demand of their captive that was at once straightforward and impossible to fulfill: return control of the district of Ghaziabad in northeastern Kunar province to neighboring Nuristan province.

Musafir Khan Qayumzai, the district governor of Ghaziabad, could do little more than listen. On the evening of July 1, as he rode home from work with his son, son-in-law, two bodyguards and a driver, a band of a dozen or more men had stopped their car at gunpoint and ordered them to step out.

The hostages were driven to a mud-brick building on the outskirts of the village of Ghaziabad, the district center. One of the captors did most of the talking and told Qayumzai to stop cooperating with U.S. forces in the area.

&ldquo;We will take Ghaziabad back if it is not given,&rdquo; he said.

Qayumzai recalled his ordeal during an interview Friday at Forward Operating Base Bostick, located in the eastern Kunar village of Narai about 10 miles west of the Pakistan border. He had arrived at the base a few days earlier to recover from a gunshot wound to the big toe on his left foot.

Accounts vary as to how and when he and the others regained their freedom and the circumstances of his injury. What appears less ambiguous is that as the U.S. military seeks to fortify its presence in Kunar and other eastern provinces this summer to restrict the flow of insurgents from Pakistan, small border clashes inside Afghanistan threaten to complicate that broader campaign.

&ldquo;You have some differences between the provinces and between tribes,&rdquo; said Lt. Col. Dan Wilson. He commands Task Force No Fear, the 3rd Brigade Combat Team of the 25th Infantry Division based at FOB Bostick. &ldquo;That can make for difficult situations.&rdquo;

Tribes loyal to Nuristan live on both sides of the disputed Nuristan-Kunar border, and some elders believe that Nuristan holds a historical claim to Ghaziabad.

The internecine fracas has ensnared the 50-year-old Qayumzai as he tries to work with the Army task force to build a cell phone tower in his village.

&ldquo;Ghaziabad is part of Kunar, and there are people who don&rsquo;t like that,&rdquo; he said through an interpreter.

The district governor, who has dark eyes, a salt-and-pepper beard and a genteel manner, talked shortly before flying home from Bostick, where he received treatment for his wound.

Qayumzai claimed his son and the others were released soon after the abduction occurred, and that he escaped from his captors a night later, fleeing on foot amid gunfire.

&ldquo;They shot at me and one (bullet) hit me,&rdquo; he said. A purple bandage was wrapped around his toe. &ldquo;But I was able to hide by a house and they went the other way.&rdquo;

Kunar officials have offered a different story, saying the six men were freed as a result of tribal negotiations. Wilson theorized that one of the kidnappers may have shot Qayumzai in the foot to emphasize the demand for Kunar to cede Ghaziabad to Nuristan.

Yet Wilson doesn&rsquo;t regard the provincial border quarrel as unsolvable.

&ldquo;Afghans can have a blood feud for 200 years, but even during that time, they&rsquo;ll talk to each other,&rdquo; he said. &ldquo;Then one day they negotiate a settlement.&rdquo;

Qayumzai stayed in an air-conditioned room at Bostick that included a flat-screen TV, microwave and a small refrigerator, and some U.S. soldiers speculated that the amenities made him reluctant to leave. When Wilson dropped by to bid farewell, Qayumzai offered thanks while clutching his hands to his heart.

Later, he boarded a helicopter for his return to Ghaziabad, and as the chopper lifted off, Wilson mentioned that, due to Qayumzai&rsquo;s recent absence, the Afghan government might appoint another district governor.

Either way, and regardless of which province claims Ghaziabad, Wilson takes a pragmatic view of the work his unit faces this summer.