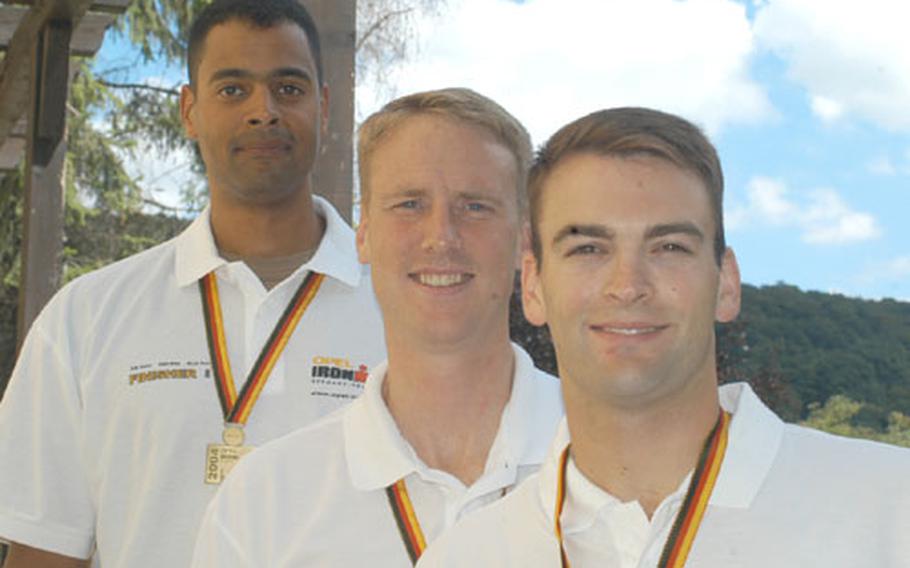 From left, Capts. Ben Grimes, Travis W. Hall, and Gray B. Broughton all judge advocates with V Corps, recently completed the Opel Ironman Germany triathlon competition in Germany and are preparing for a similar competition in Heidelberg. (Jessica Inigo / S&S)

From left, Capts. Ben Grimes, Travis W. Hall, and Gray B. Broughton all judge advocates with V Corps, recently completed the Opel Ironman Germany triathlon competition in Germany and are preparing for a similar competition in Heidelberg. (Jessica Inigo / S&S) 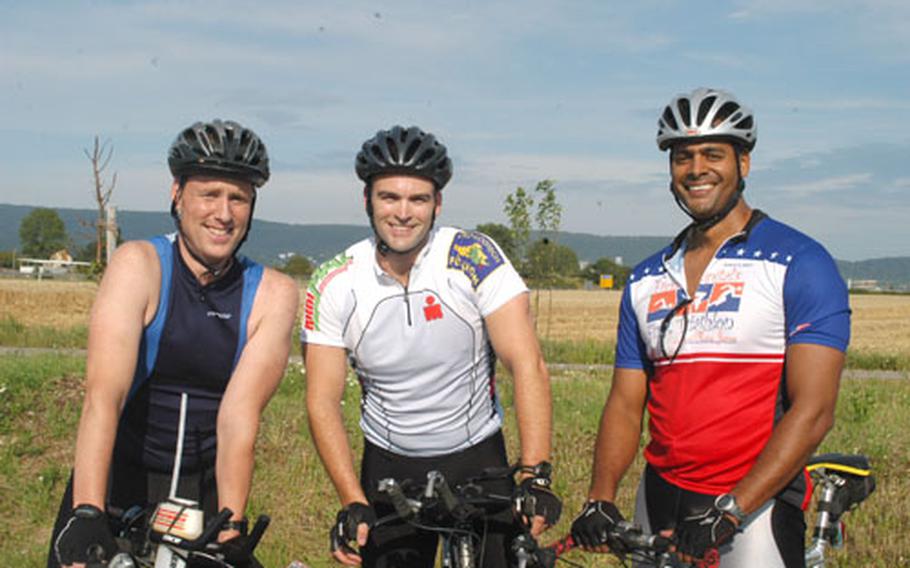 From left, Capts. Travis W. Hall, Gray B. Broughton, and Ben Grimes, all V Corps judge advocates, prepare for the Heidelbergman competition in Heidelberg, Germany, on Aug. 1. They all competed in the Opel Ironman Germany triathlon earlier this month. (Jessica Inigo / S&S)

HEIDELBERG, Germany &#8212; A trio of military lawyers have just closed one of their toughest trials.

But compared to the German Ironman competition &#8212; swimming 2.4 miles in a lake, pedaling 112 miles on bicycles throughout Frankfurt and its surrounding communities, and then running 26.2 miles up and down the bank of the Main River &#8212; the Heidelbergman is like a break to the lawyers&#8217; busy schedules.

The overall winner of Ironman Germany was Stefan Holzner who reached the finish line at the historic Frankfurt R&#246;merberg square in 8 hours, 16 minutes, and 35 seconds, winning the qualifying event for the Ironman Triathlon World Championships in Hawaii.

When the lawyers realized they were all planning to participate in the Ironman Germany competition, they sought to train together. The command allowed the three to begin an alternate physical training program open to their company each morning. Usually, the alternate PT program consisted of various running activities.

In the afternoons, the triathletes continued training by swimming or riding their bikes.

Training, to this trio, was about stressing their body to make it stronger and more efficient. Not only were they in a perpetual state of fatigue, they said, they were emotionally and mentally engaged with their racing goals most of the time.

Add a wife or girlfriend, kids, a full-time military career and deployments, as well as outside commitments, and life for the three was pretty busy.

The juggling act was difficult for all the lawyers, especially Broughton and Hall, who have families to think of. But no one felt the pressure more than Grimes. He is the master juggler.

Grimes, 30, has completed two full Ironman triathlons; four half Ironman events where participants finish one-half of each event; many shorter distance triathlons; and three to four races a year over the past several years.

&#8220;My girlfriend only lets me do an Ironman every other year,&#8221; explained Grimes, which is why he&#8217;s taking next year off to get to know his girlfriend again before training for an Ironman in 2006 and the 2008 New Zealand Ironman competition.

For Hall, between work, family life and the Ironman, there really isn&#8217;t time for much else. He said he tried to keep his training from affecting his family life too much by taking time to see special events in his three children&#8217;s lives. For instance, he would always make time to attend his 10-year-old son Conner&#8217;s baseball games.

However, next year he is being reassigned to Fort Knox, Ky., while his family moves to his hometown of Portland, Ore. Though separation will be difficult, it will be the perfect time to commit to more serious training, he said.

After the Heidelbergman, Hall said he hopes to compete in the Ironman Triathlon World Championships in Hawaii when he&#8217;s 40.

Broughton will hang up his Ironman gear for at least a year after the Heidelbergman. His wife, Tamara, is due to have their first child in January.

Broughton has always incorporated sports into his life, but now he&#8217;s planning to take a year off of major competition to enjoy his new baby.

Broughton, 28, said he was pleased with his time at the Ironman Germany, which was his first Ironman triathlon. He has done shorter triathlons, as well as races throughout the years.

A friend, Cabell Hatchett, who introduced him to triathlons, came from their hometown of Richmond, Va., to compete in the Ironman with him.

Broughton said he plans to make a comeback to Ironman competition in 2006.