‘Triangle of Death’ now a safe passage for pilgrims 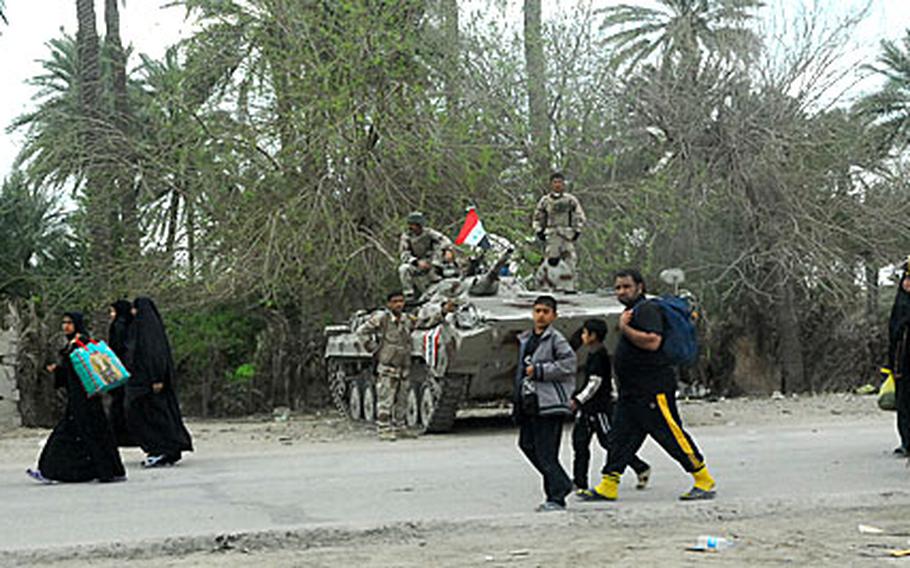 MAHMUDIYAH, Iraq &#8212; They called it the &#8220;Triangle of Death,&#8221; a bloody, 330-square-mile expanse of canal-veined farmland and low-rise towns that hosted the wedding of terrorist Abu Musab Al-Zarqawi and saw cash bounties paid for the murder of local officials, foreign journalists and Iraqi and American soldiers.

Today however, this infamous piece of real estate straddling the Sunni-Shiite fault line south of Baghdad has earned the reputation of being Iraq&#8217;s most secure passage for Shiite pilgrims marching south to Karbala for the Arba&#8217;een holiday.

It is also the proving ground for the U.S. military&#8217;s new method of training and shepherding Iraqi army troops. Whereas previous efforts involved the embedding of 12-man training teams with Iraqi army units, U.S. forces now are devoting entire battalions to supporting and training Iraqi soldiers, launching routine patrols and massive operations on a joint basis.

While scores of pilgrims traveling through Hillah and Baghdad were killed last week by suicide bombers and drive-by gunmen, this area immediately south of the capital has, so far, escaped any serious incident.

After an aggressive and costly campaign waged by units from the 101st Airborne Division roughly a year ago and the arrival of thousands of new and well-equipped Iraqi army soldiers, both U.S. and Iraqi commanders here say the old Triangle of Death label no longer fits.

&#8220;Three years ago they called this the Triangle of Death, but that is the past,&#8221; said Col. Ali Jassim Mohammed Al Frajee, an Iraqi army commander here. &#8220;Iraqi army and coalition forces paid a lot of sacrifices here over the last three years and now we have 4 million pilgrims passing through here without anything happening. That is awesome.&#8221;

To be sure, cells of militants still salt the lush fields and palm groves that skirt the Euphrates River, but commanders with the Fort Drum, N.Y.-based 2nd Brigade Combat Team, 10th Mountain Division, and the 4th Brigade, 6th Iraqi Army Division say they have all but cleared enemy fighters from the towns of Mahmudiyah, Yusafiyah and Latifiyah, known collectively as the &#8220;fiyahs.&#8221;

In the last six months, overall attacks have dropped, commanders say, and the lethality of these episodes has plummeted. Most significantly, enemy rocket and mortar attacks have been cut in half and commanders credit an aggressive, joint Iraqi and American campaign of air assaults, river landings and foot patrols for uncovering significant caches. In one week alone, U.S. and Iraqi troops uncovered more than 100 stashes of rockets, mortars, bombs and other weapons.

Previously, Iraqi army units were prone to defending static patrol bases or checkpoints, a posture that virtually invited attacks, U.S. commanders said. Now, Iraqi troops under Ali are far more aggressive and have taken to searching for insurgents and weapons stashes beyond their bunkered positions.