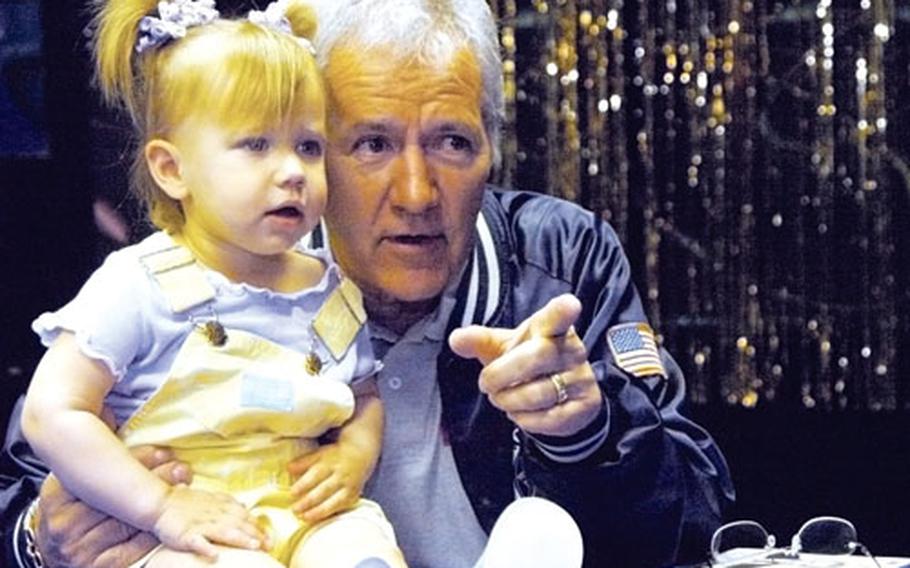 Little Sydney McDonald may only be 22 months old, but she already knows the Jeopardy! theme song. She recognized Jeopardy! host Alex Trebek Thursday when he came to Yokosuka Naval Base to scout contestants and to meet military members and their families. (Allison Batdorff / S&S) 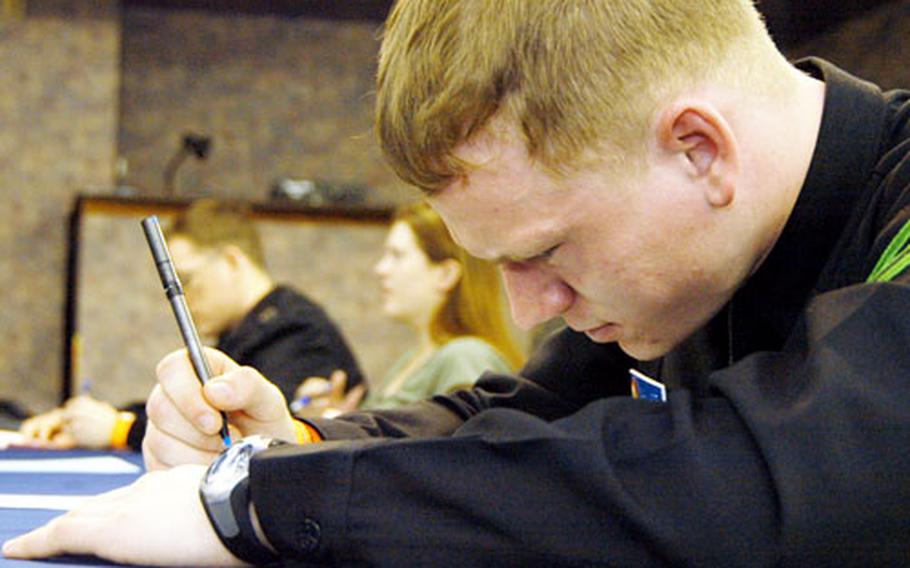 Navy Airman Walter Wallace was one of the many Yokosuka Naval Base military and civilians to test their Jeopardy! skills Thursday when the show visited the base. Wallace said several of the pretest questions stumped him. (Allison Batdorff / S&S) YOKOSUKA NAVAL BASE, Japan &#8212; When Alex Trebek, host of one of the world&#8217;s most popular trivia shows, gives you test advice, you take it.

Trebek, along with other show staff and USO/Armed Forces Entertainment, were scouting for players and showing support at bases in Japan and on Okinawa this week. This is Trebek&#8217;s 12th USO tour. Beyond making tryouts &#8220;convenient&#8221; for military and their families living abroad, Trebek feels strongly that the troops shouldn&#8217;t be &#8220;forgotten&#8221; in peace or wartime, he said.

Fun games and autograph sessions were held for casual viewers, and those who want to compete take a 10-question pretest, which determines whether they can take the 50-question final test. Those who pass the final test can be considered as an actual television contestant.

At Yokosuka on Thursday, prospective military and civilian contestants lined up at Club Alliance.

The two-hour final test can be more difficult than doing the show, Trebek said.

But many just came to see Trebek, who has become an American television icon. Trebek signed autographs (including on a pair of shoes), held babies and donned ballcaps for those who came to meet and have their picture taken with him.

Twenty-two-month-old Sydney McDonald recognized Trebek, as she has been a &#8220;Jeopardy!&#8221; fan since she was 15 months old, said her mother, Tammy.

The toddler likely is a future contender, she said.

&#8220;Jeopardy!&#8221; was to be at Kadena Air Base on Saturday. The pretest for Okinawa status-of-forces-agreement personnel, mock game and autographs was set for 3-5 p.m. at Schilling Community Center. The show will be at Camp Kinser on Sunday, with a mock game and autographs starting at 1 p.m. at the Surfside. The final test for Okinawa hopefuls will be given at 5 p.m.

Prospective contestants must be status-of-forces-agreement sponsored and 18 or older.