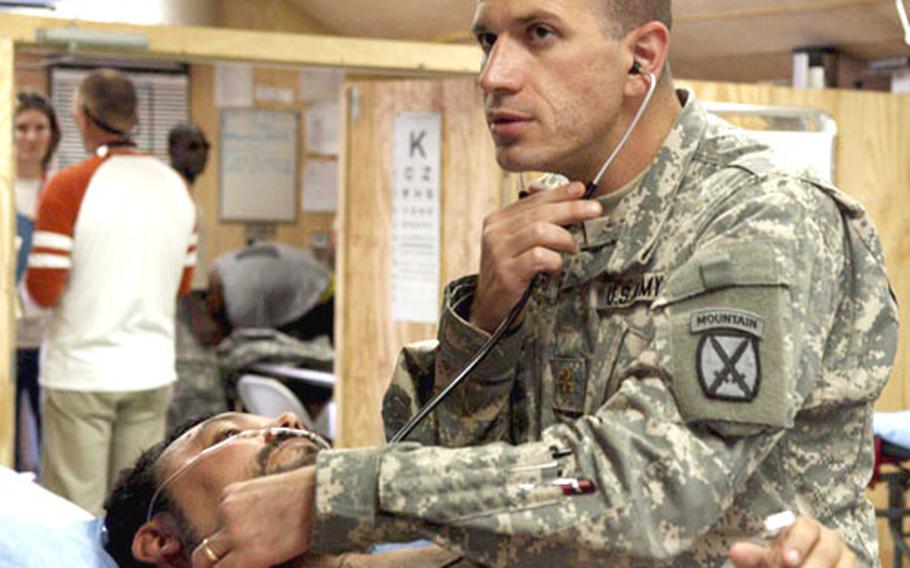 Dr. (Maj.) Chris Lettieri checks Martin Foley, who had been rushed to the 14th Combat Support Hospital on Bagram Air Base, Afghanistan, after complaining of chest pains. (Michael Abrams / S&S)

Dr. (Maj.) Chris Lettieri checks Martin Foley, who had been rushed to the 14th Combat Support Hospital on Bagram Air Base, Afghanistan, after complaining of chest pains. (Michael Abrams / S&S) 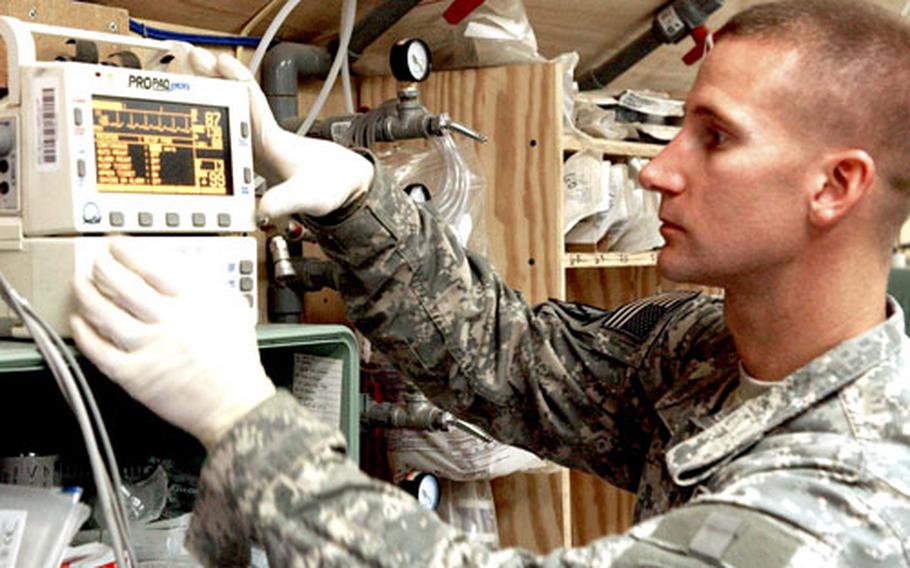 Sgt. Jason Cady checks the vital signs of a patient at the 14th Combat Support Hospital at Bagram Air Base. (Michael Abrams / S&S) 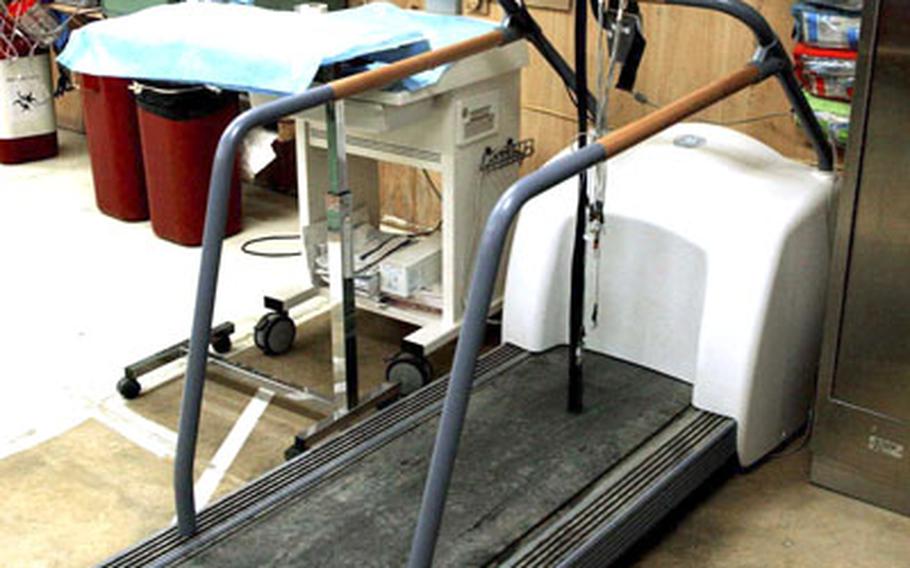 Checking patients with cardiovascular symptoms on the treadmill, often makes it unnecessary to evacuate them from the theater. (Michael Abrams / S&S)

BAGRAM AIR BASE, Afghanistan &#8212; Since the war in Afghanistan began, hundreds of people, most of them contractors, have had to be evacuated out of theater because of chest pain and the chance they were risking a heart attack, doctors say.

But in the past seven months, after Col. Thomas Frank, chief doctor at the 14th Combat Support Hospital, brought over a new treadmill designed to help diagnose coronary heart disease, 105 people who previously would have been evacuated to the U.S. or Germany were tested and found healthy here, saving the U.S. military huge amounts of money.

The treadmill, plus the computer and software that go with it, cost $24,000, and Frank decided to buy it and ship it to Afghanistan during his pre-deployment visit to Bagram. He&#8217;d asked the staff what the principle reasons were for medical evacuations and was told chest pain, especially in older contractors and reservists, was way up there.

The pain, the sweating, the nausea, can be indistinguishable from heart attack symptoms, Frank said. So if, say, a man in his 40s or 50s, after eating a lot of pizza starts feeling that way, &#8220;He&#8217;ll become very concerned, put out his cigarette and come to the ER,&#8221; Frank said.

Of the 230 people who&#8217;ve come to the hospital with chest pain since February, six were actually having heart attacks. One died on the tarmac before being evacuated, Frank said. The rest, all but one a KBR worker, Frank said, were evacuated out of Afghanistan.

Seventeen others, it was determined by the stress tests, were likely suffering from coronary artery disease, and were also put on a C-130 or C-17 and sent to the U.S. or Germany.

&#8220;[The patients] need a confirmatory diagnosis and treatment,&#8221; Maj. Chistopher Lettieri, chief of critical care and inpatient services at the hospital, said last week. &#8220;This is not a place where you want to have a heart attack.&#8221;

But 10 minutes later, Lettieri had a man in his ER who thought he might be having one. Martin Foley, a 46-year-old KBR employee in Afghanistan for 14 months, who had high blood pressure and smoked, said he&#8217;d been working in Kabul when the pain hit him.

Before February, Foley would have been evacuated. But this time, he was given medications and monitored overnight in the hospital, then put on the treadmill. Because the test showed no problems, Foley was allowed to return to his job, Frank said.

Sometimes what caused the pain can not be determined, Frank said. The stress test looks for a lack of oxygen to the heart &#8212; usually because of a blocked coronary artery &#8212; during exercise. If there are no changes in the electrocardiogram or other symptoms while the heart is under the stress of exercise, &#8220;We can basically conclude they don&#8217;t have any coronary heart disease,&#8221; Frank said.

Not all people who come in with chest pain are put on the treadmill. Someone whom other tests show is having or just had a heart attack is not put on the treadmill. And a 20-year-old without risk factors would not generally be tested because the likelihood of heart disease is less than the likelihood of a false positive result from the test, which would then make further, more invasive tests obligatory, Frank said.

But because the likelihood of heart disease rises with age, the majority of patients who are tested on the treadmill are reservists or contractors, Frank said. Other risk factors include a family history of heart disease, smoking, high blood pressure and diabetes.

Women generally have much less risk than men until after menopause. Lettieri said in three months, he&#8217;s done 39 treadmill tests, including four on women, two of whom had to be evacuated.